AL-AFKAR #43: ‘AIN ILLNESS AND ITS TREATMENT 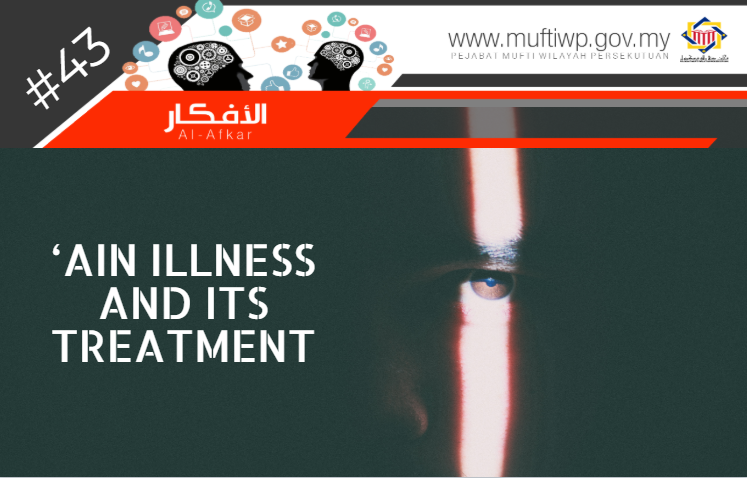 Assalamualaikum SS Dato’ Seri Mufti. I want to ask regarding an illness known as ‘ain illness. Does this illness affect humans? How would we treat it or protect ourselves from it? Hope for an explanation.

“And indeed, those who disbelieve would almost make you slip with their eyes.”

Ibn Abbas, Mujahid and others said: (لَيُزْلِقُونَكَ) means those with the intention to make you fall. While (بِأَبْصَارِهِمْ) “with their eyes, means their jealousy and hatred towards you. If it isn’t for the protection of Allah SWT from them you would not be safe from them.”

In the verse, it is clearly stated that the influence of evil eyes is true and Allah SWT’s commandment to seek His protection from it. This is stated in several hadiths from various narrations. (See Tafsir al-Qur’an al-‘Azim, 8/260)

“The influence of an evil eye is a fact.”

In a hadith narrated by Ibn Abbas R.Anhuma, the Prophet PBUH said:

Imam al-Nawawi said: “The above hadith is a confirmation of Allah SWT’s will, the truth of ‘ain illness and its dangers.” (See Syarh al-Nawawi ‘ala Sahih Muslim, 7/328)

‘Ain illness is from the gaze of another person who is jealous or impressed towards someone. It can happen from a jealous person, or a loved one, from an evil person or a pious person.

Al-Hafiz Ibnu Hajar said: “’Ain is an illness due to the gaze of another person who is jealous or greatly impressed towards someone and is harmful to the person who are the object of jealousy or inspiration.”

He further states: “‘Ain can also happen when one is greatly impressed by another person without the feelings of jealousy or hatred, (it can also happen) from a loved one and (even) from a pious person (accidentally).” (See Fath al-Bari, 10/203-205)

To treat ‘ain illness, one should seek treatment in accordance with syara’, which is as the following:

“There is no Ruqyah except for the evil eye or from the sting of a scorpion.”

It was narrated that Abu Umamah bin Sahl bin Hunaif said: “ ‘Amir bin Rabi’ah passed by Sahl bin Hunaif when he was having a bath, and said: ‘I have never seen such beautiful skin.’ Straightaway, he (Sahl) fell to the ground. He was brought to the Prophet (ﷺ) and it was said: ‘Sahl has had a fit.’ He said: ‘Whom do you accuse with regard to him?’ They said: “ ‘Amir bin Rabi’ah.’ The Prophet PBUH said:

‘Why would anyone of you kill his brother? If he sees something that he likes, then let him pray for blessing for him.’

Then he called for water, and he told ‘Amir to perform ablution, then he washed his face and his arms up to the elbows, his knees and inside his lower garment, then “The Prophet PBUH told him to pour the water over him.”

“This treatment is ineffective for those who do not believe it, making fun of it, doubting it or just trying it without believing in the treatment.” (See Fath al-Bari, 10/205)

“I seek refuge for both of you in the perfect words of Allah from every devil and every poisonous thing and from the evil eye which influences.”

Lastly, we would like to ask readers to contemplate on surah al-Falaq and practise it to protect ourselves from jealousy and enmity of others. Hence, we end this discussion with the following verses of surah al-Falaq: