AL-AFKAR #75: LOVE TO WATCH AND LISTEN TO SCARY STORIES THAT ONE BECOMES AFRAID OF BEING ALONE 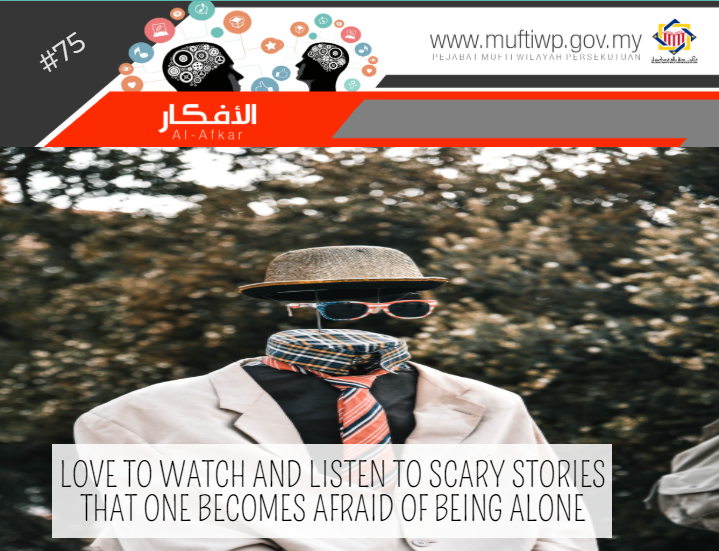 Assalamualaikum w.b.t Datuk. May you always be healthy and in peace. I have a question. My child loves to watch ghost stories. Sometimes, she stays up late that even at midnight she will still be up listening to scary stories in podcasts. I feel that she has a kind of obsession with watching or listening to ghost stories. But then, I notice some changes in her. She was a brave person, but now, she’s easily frightened. She will always ask someone to accompany her everywhere and is frightened to be left alone in our house. She was not like that before. My question is, what is the ruling of watching or listening to scary stories that it changes her to be a fearful person? Hope for an explanation from Datuk. I am sorry if my question is a bit long.

As a Muslim, we believe in the existence of realm other than the material or visible world which is called the ghaib (unseen). This is in accordance with a saying of Allah SWT in the Quran. Allah SWT say:

This is the Book about which there is no doubt, a guidance for those conscious of Allah ­ (2) Who believe in the unseen, establish prayer, and spend out of what We have provided for them, (3)

Syeikh Mustafa al-Maraghi said that believing in the unseen is believing in the existence of a realm other than the physical world which is guided by dalil and sound mind. (Refer Tafsir Al-Maraghi, 1/35)

“And gathered for Solomon were his soldiers of the jinn and men and birds, and they were [marching] in rows.”

Allah SWT say in another verse:

O children of Adam, let not Satan tempt you as he removed your parents from Paradise, stripping them of their clothing to show them their private parts. Indeed, he sees you, he and his tribe, from where you do not see them. Indeed, We have made the devils allies to those who do not believe.

Indeed, he sees you, he and his tribe, from where you do not see them

This verse clearly states that indeed, jinn and shaytan cannot be seen by humans’ naked eyes. Even when they are not visible to the naked eyes, as Muslims, we still believe in their existence as the Quran has already stated that they exist.

While ghost, phantom and others, they are in fact the imagination of our society. Ghosts in Malay custom are imagined as invisible beings which appear with scary faces. Some said that ghosts are the souls of the dead which wander due to unfulfilled wishes when they were alive. Among ghosts which are always related to the dead are pocong, vampires, langsuir and others. (Refer Diskusi Akidah Dan Pemikiran Semasa di Malaysia, pg 405)

In fact, it is merely the imagination of the society while the form of jinn and shaytan are unlike any of those stories. No one may depict their real form except what Allah SWT and the Prophet PBUH had told us whether in the Quran or the Sunnah.

Syeikh Allamah Badruddin al-Syibli cited the words of al-Qadhi Abu Ya’la al-Farra’ that the jinn’s body may become more physical. We may not know on the real for of their body whether they are subtle or physical unless what is stated by the words of Allah and Rasul. They are not visible to us as Allah do not permit our eyes to see them. This opinion is presented to reject the opinion of Muktazilites who said that jinn’s body is subtle, that’s why we cannot see it. (Refer Aakam Al-Marjan Fi Ahkam Al-Jann , pg 17).

In other words, ghosts depicted by our society are merely the forms taken by jinn and shaytan to scare and deviate humans. This is proven by a hadith narrated by Jabir bin Abdullah that the Prophet PBUH said:

There is no transitive disease (naturally), no ill omen, no ghoul.

Al-Munawi said ancient Arabs believe a creature known as a ghoul is a form of a jinn which is able to shapeshift into a person and disturbs people who are walking alone at night and even cause mishaps or harm the person. (Refer Faidh Al-Qadir Syarh Al-Jami’ Al-Saghir, 6/434).

This is supported by the words of Imam al-Nawawi. He said that what is meant by the Prophet PBUH by ‘there is no ghoul’ is the shapeshifting done by the jinn and shaytan is unable to cause any harm on humans. He made his argument stronger by including another hadith as follows:

There is no ghoul, but rather al-Sa’ali

What is meant by al-Sa’ali is a sorcerer among the jinn. They are accountable for the sorcery which cause scary imagination and shapeshifting. (Refer Al-Minhaj Syarh Sahih Muslim, 7/375).

Ibn Abi al-Dunya narrated from Yasir bin Amru that once a ghoul is mentioned in front of Umar al-Khattab. He said: ‘One may not change forms to another, but he actually has a sorcerer just like the sorcerers among you. If you see them, call the adhan’. (Refer Aakam Al-Marjan Fi Ahkam Al-Jann, pg 22)

All of this mean that jinn and shaytan are given some particular advantages by the will Allah to shapeshift into particular forms to scare people. Hence, what is seen and imagined by people is not the real form of jinn or shaytan.

Coming back to the question asked, as those who believe in Allah, we should not be overly scared of ghosts. It is merely the doing of jinn and shaytan to scare humans. In fact, they are the one who are scared of the believers. Therefore, the salafussoleh are taught to not be scared of ghosts as they may not cause any harm upon humans.

Muhammad bin Ahmad al-‘Utbi said that Abdullah bin Zubair once saw a man whose height is a hand span on his horse’s saddle. Then he asked: Who are you? The little man answered: I am Izb (إِزْب). Abdullah bin Zubair Asked again: What is a Izb? The little man answered: It is a name for jinn. Then he beat him on his head until he ran away. (Refer Aakam Al-Marjan Fi Ahkam Al-Jann, pg 22).

This shows that shapeshifting by jinn and shaytan in many forms should not be feared by us. We should not be afraid of them for it may lead to syirk. This may also lead to people worshipping them and others.

In conclusion, listen to only beneficial things. Leave useless things which will not add to your iman (faith) and amal (deeds). Attend religious lecture frequently to add knowledge in the religion which could protect us from easily fall into sins.

Read al-Quran regularly as our daily wirid. Listening and watching mystical shows excessively will then worryingly lead to superstition, disbelief and others. Besides, parents should play their role in educating their children properly. Strengthen and give attention to aqidah matters. Explain on the matters of syirk, khurafat and others so that they can free themselves from it. Never educate the children with khurafat and superstitions or even encourage them to do actions which may harm their aqidah.

May Allah always protect us from useless matters. Wallahua’lam.