AL-AFKAR #107: THE BLESSING OF MEETING ALLAH SWT IN PARADISE 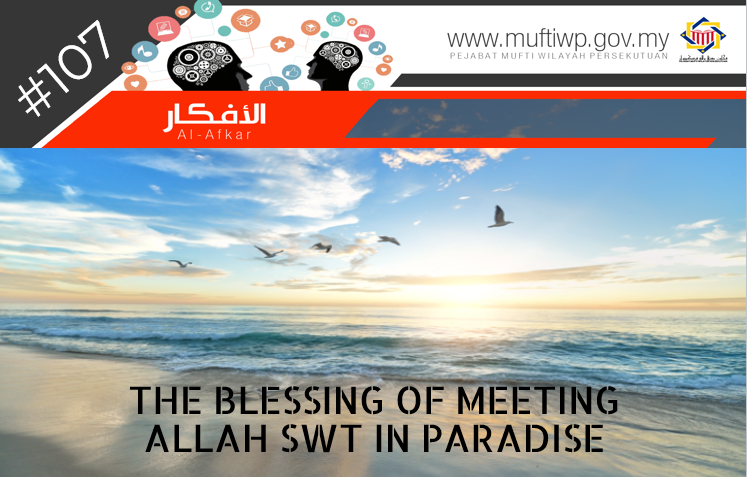 Is it true that we can meet Allah SWT in paradise in the hereafter?

The Blessing of Meeting Allah SWT in Paradise

Ahlussunnah wal Jamaah scholars have agreed that meeting Allah SWT is not something that is impossible when considered logically and wajib through sam’iy evidences. They also agreed that the believers will meet Him in the hereafter. As for the opinion from some of the Muktazilites, Khawarij, Jahmiyyah and Murji’ah who claimed that we cannot meet with Allah SWT in paradise, their opinion is wrong and it contradicts the evidences in the Quran, sunnah and both ijma’ of the Companions R.Anhum and the salafussoleh. (Refer Syarh al-‘Aqidah al-Tohawiyyah by Imam Ibn Abi al-‘Izz pg. 188; Syarh al-Nawawi ‘ala Muslim by al-Imam al-Nawawi 3/15; Syarh al-‘Aqa’id al-Nasafiyyah by Imam al-Taftazani pg. 77-79 dan Majmu’ al-Fatawa Ibn Taimiyyah 3/389)

Among the clearest evidences is the statement of Allah SWT:

“[Some] faces, that Day, will be radiant, Looking at their Lord.”

The same is stated in another statement of His:

“For them who have done good is the best [reward] and extra.”

“When those deserving of Paradise would enter Paradise, the Blessed and the Exalted would ask: Do you wish Me to give you anything more? They would say: Hast Thou not brightened our faces? Hast Thou not made us enter Paradise and saved us from Fire? He (the narrator) said: He (God) would lift the veil, and of things given to them nothing would he dearer to them than the sight of their Lord, the Mighty and the Glorious.”

Allah SWT states in another verse:

“They will have whatever they wish therein, and with Us is more.”

The same is stated in His statement:

No! Indeed, from their Lord, that Day, they will be partitioned.

Imam al-Baihaqi narrated according to Imam al-Syafi’e, this verse is the evidence that those of whom Allah SWT loves will be able to meet Him in which He is happy with them. (Refer Ma’rifah al-Sunan wa al-Atsar 1/191)

We were sitting with the Prophet (ﷺ) and he looked at the moon on the night of the full-moon and said, "You people will see your Lord as you see this full moon, and you will have no trouble in seeing Him,”

Likewise, it is stated in a hadith narrated by Abdullah bin Umar R.Anhuma, the Prophet PBUH said:

“You must know that not one of you will ever see his Lord until he dies.”

In short, we would like to state that the blessing of seeing and meeting Allah SWT in paradise is something that has been agreed upon by the scholars of Ahlussunah wal jamaah according to numerous evidences from al-Quran and al-Sunnah. There is none who contradict this except the people of bid’ah from among the Muktazilites, Khawarij, Jahmiyyah and Murji’ah.