AL-KAFI #509: THE RULING OF WORKING IN A CONVENIENCE STORE THAT SELLS ALCOHOLIC BEVERAGES 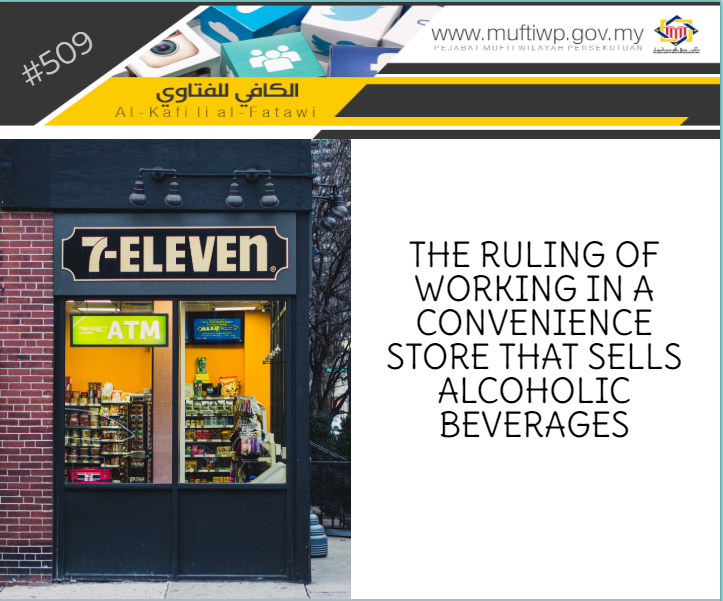 What is the ruling of working in seven eleven and speed mart that sells alcoholic beverages?

“O you who have believed, indeed, intoxicants, gambling, [sacrificing on] stone alters [to other than Allah], and divining arrows are but defilement from the work of Satan, so avoid it that you may be successful.

Imam Ibn Kathir commented on the above verse stating a narration from Abdurrahim bin Ghanm RA, where the Prophet PBUH said:

Hence, for a mukmin he should be conscious of Allah SWT and avoid from being involved in any type of work that is related to alcoholic beverages. This is supported with a hadith from Anas bin Malik RA:

However, if the source of the income is a mixed of from what is permissible and prohibited, then accepting the wage is not prohibited for it is uncertain as to the source of it is prohibited. Imam al-Suyuti discusses the general Islamic legal maxim:

“Certainty cannot be removed by doubt.”

Hence, in our opinion, working in 7 eleven, speed mart or others that also sell alcoholic beverages are as the following:

We also advise to try and find work where there are no elements of doubt, for it is safer and calms one’s heart. So true is the words of the Prophet PBUH:

“So, he who guards against doubtful things keeps his religion and his honour blameless.”

Thus, by finding permissible sources and avoiding doubtful matters, then surely, we will gain goodness and blessings in our lives.