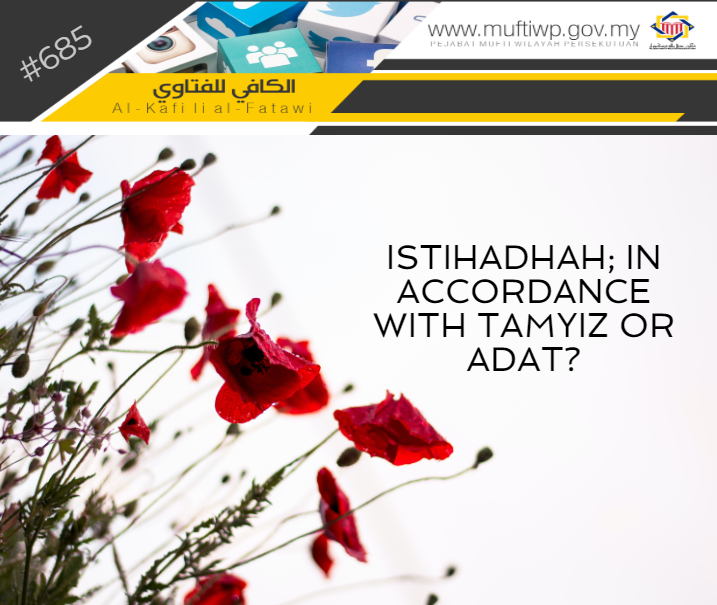 I would like to know. If one still experience bleeding after the 15th day starting from the first day of menstruation, which one is the most accurate method to state the istihadhah; tamyiz or adat for a woman whose regular menstruation cycle is for 9 days every month and is able to differentiate the characteristics of her blood?

Based on the facts given, the woman is said as mustahadhah mu’taddah (women experiencing istihadhah; the normal period of menstruation and able to differentiate the characteristics of blood).

Hence, it is prioritized to follow the method of tamyiz rather than adat. This is because the alamat (signs) for haidh is upon the blood and its characteristics for the woman who experiences it. So, the ability to determine the characteristics of the blood is prioritized compared to the counting based on adat. While the method of adat is used if the conditions for tamyiz cannot be fulfilled. This is in accordance with the hadith narrated by ‘Aisha RA on the question of Fatimah bint Abi Hubaisy to the Prophet PBUH on herself who is impure due to experiencing istihadhah. Then, the Prophet PBUH answered:

it is from a blood vessel and not the menses. So when the real menses begins, give up your prayers and when it (the period) has finished wash the blood off your body (take a bath) and offer your prayers.

The conditions for applying tamyiz:

For example, Rosnaini normally has her menses for 5 first days every month. Last month, she bled for 25 days. 10 days’ discharge of strong blood (blackish) and 15 days for weak blood (reddish). Hence, it is ruled that the 10 first days of discharge is the haidh while 15 days later is the istihadhah. Hence, 15 days of istihadhah is her pure state and she is obligated to perform prayer and Ramadhan fasting.

It is also wajib for the woman to qadha’ (replace) her prayer on the 11th day to the 15, which is the period of discharge of the weak blood, although it is not sinful for her because she did not know from the beginning on the total days of her blood discharged after the 15th day.

It is also stated from the opinions from other madhhabs on a woman of mustahadhah mu’taddah mumayyizah.

May this explanation benefit us all.