AL-KAFI #838: THE RULING OF GIFTING ALCOHOLIC BEVERAGES TO THE NON-MUSLIMS 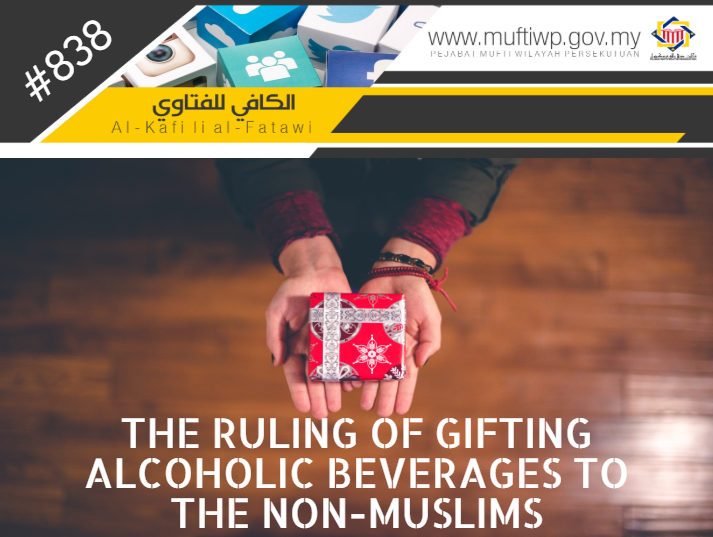 What is the ruling of giving prohibited food and drinks to non-Muslims? For example, I won a lucky draw but among the prizes are an alcoholic beverage, can I give it to a non-Muslim friend or neighbour?

It is prohibited to give alcoholic beverages to non-Muslims. This is in accordance with a hadith from Abu Hurairah RA:

In another hadith, from Anas Malik RA, he said:

I was the butler of the people in the house of Abu Talha, and in those days, drinks were prepared from dates. Allah's Messenger (ﷺ) ordered somebody to announce that alcoholic drinks had been prohibited. Abu Talha ordered me to go out and spill the wine. I went out and spilled it, and it flowed in the streets of Medina. Some people said, "Some people were killed and wine was still in their stomachs." On that the Divine revelation came: "On those who believe and do good deeds There is no blame for what they ate (in the past).”

The prohibition of it is according to an Islamic legal maxim:

According to Syeikh Muhammad al-Zarqa, based on the above maxim, whatever is prohibited cannot be benefitted from and it is also prohibited to give it to others, whether the giving is as a gift or a trade. The reason is, the gifting is a form of invitation and compliance towards what is prohibited. (Refer Syarh al-Qawa’id al-Fiqhiyyah, 1/215)

Alcoholic beverages are also proven as a great harm to humans, where it is the cause of 2.8 million deaths in the year 2016 and approximately 10% of deaths among people of 15 to 49 years of age. Furthermore, in a latest research, it is found that no matter how small the amount of alcohol consumed, it will still have a negative effect on humans. [1]

Hence, as a Muslim that has the knowledge and faith regarding the dangers of alcoholic beverages, which is confirmed through naqli and aqli evidences, then he must try his best to eradicate the habit of consuming alcoholic beverages among people regardless of religion.

To conclude, it is prohibited to give alcoholic beverages to non-Muslims and this ruling also applies to food that contains anything that is prohibited in the Quran and al-Sunnah, such as swine, and others that are proven scientifically as harmful to one’s health.

If we are offered a prize or win gifts that is prohibited, then we should reject it politely, explaining the reason of our rejection.