AL-KAFI #1006: THE RULING OF TROLLING ON SOCIAL MEDIA 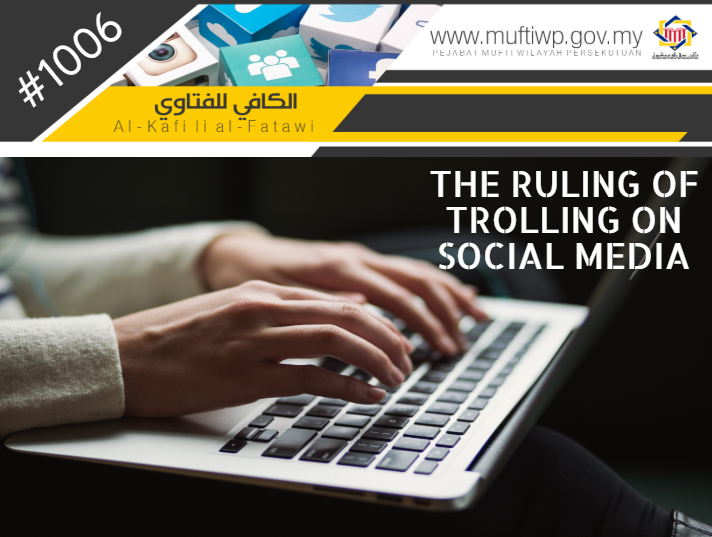 Recently, there is an increase of netizen trolling others through social media. This could sometimes lead to disagreements, arguments and enmity and even degrade others. What is the ruling of this action?

First, social media such as Facebook, Instagram, Twitter, Whatsapp and others are among telecommunication means that facilitate our communication. The original ruling of using them is PERMISSIBLE if their usage does not contradict the syarak. This is in accordance with the Islamic legal maxim, “The original ruling for something is its permissibility.”

However, if it is used with purposes or intention that contradict the syarak such as spreading lies, enmity and disagreements among people or Muslims and to degrade others is prohibited. This is based on the Islamic legal maxim, “The ruling of something is based on the intention.”

In the issue of troll, Wikipedia defined it as the following:

“In Internet slang, a troll is a person who starts quarrels or upsets people on the Internet to distract and sow discord by posting inflammatory and digressive, extraneous, or off-topic messages in an online community (such as a newsgroup, forum, chat room, or blog) with the intent of provoking readers into displaying emotional responses and normalizing tangential discussion, whether for the troll's amusement or a specific gain.”[1]

A person trolling others will usually create a fake account and using or mentioning the profile of the victim as a material in his sarcasm and jokes. Most victims are from the distinguished and famous, especially politicians and renown figures. He will also use fake names and profiles (pseudonym) in personally attacking other individuals. [2]

What’s worrying is when internet trolling committed nowadays is no longer limited to written messages, but sometimes sent in short video clips or edited pictures including dialogues created through certain apps. Mostly, they contained degrading, sarcastic, insulting messages in regards to the body or character of another individual with the purpose of agitating, inciting hate, spreading lies and degrading the victim of the troll.

If this is what is meant by the troll, then it is a clear contradiction to the manners taught in Islam. Furthermore, it is the opposite attribute of what a believer to Allah SWT and the hereafter would do. The Prophet PBUH said:

“The most perfect man in his faith among the believers is the one whose behaviour is most excellent.”

In the context of social media, the interaction is wide open; where we are able to interact with people we know and we don’t. Here, we are commanded to be mindful of our manners and be honest in practising the great manners taught in Islam. This is as stated by the Prophet PBUH:

A person should not be irresponsible in writing anything that one has to say or shared. Maybe one thought that it is a trivial matter while it is actually a serious matter in the eyes of Allah SWT. This is reminded by the Prophet PBUH:

"Indeed, a man may utter a statement that he does not see any harm in, but for which he will fall seventy autumns in the Fire."

The characteristics of troll is clearly a contradiction to numerous evidences in syarak. Some of them are:

“…and do not call each other by [offensive] nicknames.”

While the Prophet PBUH said:

“The believer is not a slanderer, nor does he curse others, and nor is he immoral or shameless.”

“A believer may commit various mistakes with the exception of betrayal and deception.”

“And do not obey every worthless habitual swearer. [And] scorner, going about with malicious gossip.”

“The tale-bearer shall not enter Paradise.”

"A Qattat (back biter) will not enter Paradise."

In another narration, the Prophet PBUH asked his companions:

“Do you know what is backbiting? They (the Companions) said: Allah and His Messenger know best. Thereupon he (the Holy Prophet) said: Backbiting implies your talking about your brother in a manner which he does not like. It was said to him: What is your opinion about this that if I actually find (that failing) in my brother which I made a mention of? He said: If (that failing) is actually found (in him) what you assert, you, in fact, backbit him, and if that is not in him it is a slander.”

To conclude, we ask the netizen to be conscious of Allah SWT with real taqwa. We should be mindful of the manners taught to us in Islam no matter where we are, even when we are online. We should be wary our every action is being watched. Even if we do not utter the words, but our hands that are doing the writing, sharing and spreading, each will be the witnesses against us, due to our own actions. This is mentioned by Allah SWT in the Quran when humans are confused as to why his own skin will be against him in the hereafter for his transgressions and sins. Allah SWT state:

And they will say to their skins, "Why have you testified against us?" They will say, "We were made to speak by Allah, who has made everything speak; and He created you the first time, and to Him, you are returned.”

The Prophet PBUH emphasized that the attribute of a believer is to not hurt other believers. He said:

"A Muslim is the one who avoids harming Muslims with his tongue or his hands. And a Muhajir (an emigrant) is the one who gives up (abandons) all that Allah has forbidden."

Furthermore, the Prophet PBUH also reminds us that our bad actions on others will bankrupt us in the hereafter even if we are among those who pray, fast and pay zakat. The Prophet PBUH said:

“Do you know who is poor? They (the Companions of the Holy Prophet) said: A poor man amongst us is one who has neither dirham with him nor wealth. He (the Holy Prophet) said: The poor of my Umma would be he who would come on the Day of Resurrection with prayers and fasts and Zakat but (he would find himself bankrupt on that day as he would have exhausted his funds of virtues) since he hurled abuses upon others, brought calumny against others and unlawfully consumed the wealth of others and shed the blood of others and beat others, and his virtues would be credited to the account of one (who suffered at his hand). And if his good deeds fall short to clear the account, then his sins would be entered in (his account) and he would be thrown in the Hell-Fire.”

Hence, the troll is an action that contradicts syarak as stated above and it is a PROHIBITED and sinful act. However, if it is done in the form of sarcasm without degrading anyone in the form of advice or wise words so that the person will change for the better, then it is permissible. May Allah SWT bless us with guidance and protect us from falling into this sinful act. Wallahua’lam.