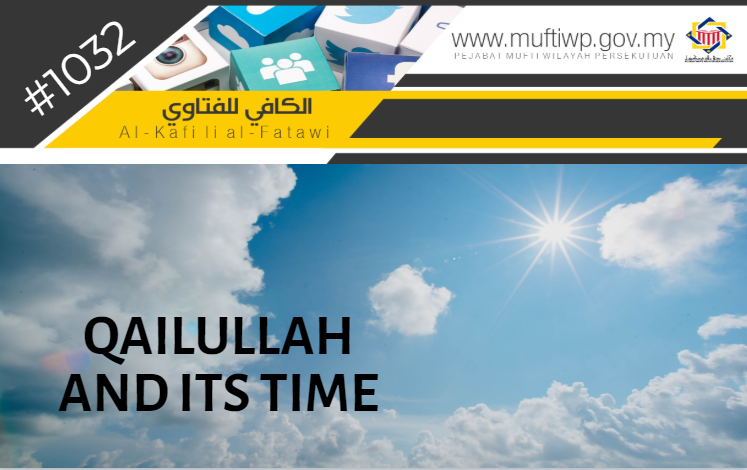 Assalamualaikum SS Dato’ Seri Mufti. I hope that you are always in great health. What is qailullah and its time? My staff always sleep before their rest time. They would sleep after twelve o’clock and sometimes will sleep until three. Hope for an explanation from you.

Waalaikumussalam. Alhamdulillah, praise and thanks to Allah for the countless blessings He has blessed us all with. Blessings and salutations to the Prophet Muhammad PBUH, his wives, his family, companions and all those that follow his teachings to the day of judgement.

Qailulllah is an Arabic word originated from the root word قَالَ-يَقِيلُ-قَيلا-قَيلُولَة. Ibnu Manzur stated that qailullah is sleep in the middle of the day. (Refer: Lisan al-Arab, 11/572)

Imam al-San’ani said that the meaning of qailullah is resting in the middle of the day even if one is not sleeping. (Refer: Subul al-Salam Syarh Bulugh al-Maram, 2/396)

"What have I to do with the world? I am like a rider who had sat under a tree for its shade, then went away and left it."

Narrated by al-Tabarani in Al-Mu’jam Al-Awsat

Simply put, qailullah is a short rest even if one is not sleeping.

Fiqh scholars have differing opinions regarding the time for qailullah. We include their opinions as the following:

“Seek help by eating Suhur for fasting that day, and by taking a brief rest (at midday) for praying at night.”

“We did not take a Qailulah nor eat Ghada’ until after Friday (prayer).”

From the above statement, this means that the time of qailullah is after the Friday prayer which is equivalent of after zohor.

To conclude, we are inclined towards the opinion that qailullah is a rest time or a nap before the sun passes the zenith which is after zohor. We advised those who are working to use the rest time allocated for qailullah to motivate oneself to continue on working. However, do not exceed the set time for we are all bound to our work responsibility. Do not betray the trust we are given to do our work.

May Allah SWT give us the strength to continue with our responsibilities the best we could.