AL-KAFI #1082: PAYING THE DEBT OR PROVIDING FOR NAFAQAH? 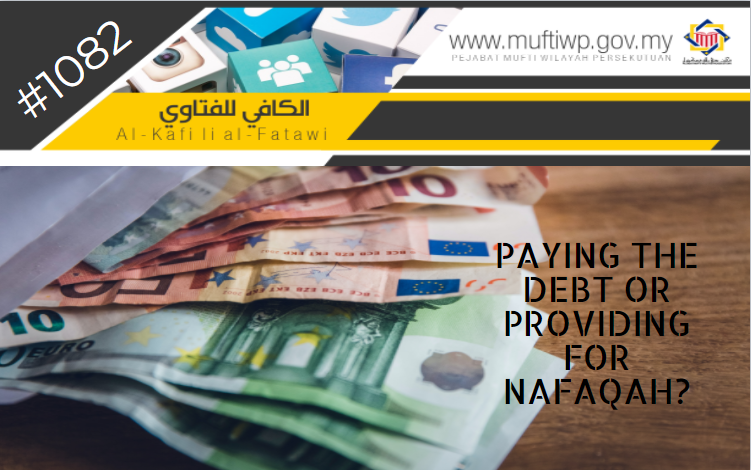 Assalamualaikum SS Mufti. I am in dilemma when receiving a low amount of income; which one is prioritized between paying the debt or providing for nafaqah? Hope for an explanation.

In answering the question, we should have understanding on those two things asked above. Indeed, this matter is essential for all Muslims to understand and comprehend, due to seeing many Malaysians who are strangled by debt. So, it is important for us to see into this issue.

Firstly, we should understand the concept of debt in Islam. This concept had been discussed by us in our article entitled, Bayan Linnas Series 149: The Status of Settling PTPTN Loan Through Shara’ Perspective [1] as the following:

Lexically, (dayn) debt is a liability (legal responsibility) in the future which is imposed on an individual whether in the form of cash money or the like.

While in technical context, the scholars divide debt into two types:

In al-Fiqh al-Manhaji, it is stated: According to the technical meaning by fuqaha’, debt is giving the right of ownership upon a property to others with the condition of the person returning back its substitute without any additional charge. (See al-Fiqh al-Manhaji, 4/121)

Indeed, Islam highlights the concept of debt through the saying of Allah SWT:

O you who have believed, when you contract a debt for a specified term, write it down. And let a scribe write [it] between you in justice. Let no scribe refuse to write as Allah has taught him. So let him write and let the one who has the obligation dictate. And let him fear Allah, his Lord, and not leave anything out of it. But if the one who has the obligation is of limited understanding or weak or unable to dictate himself, then let his guardian dictate in justice. And bring to witness two witnesses from among your men. And if there are not two men [available], then a man and two women from those whom you accept as witnesses - so that if one of the women errs, then the other can remind her. And let not the witnesses refuse when they are called upon.

Other than teaching the concept of debt in Islam, there is a stress on commandment of paying the debt. This is clear as what happened during the times of the Prophet PBUH based on a hadith narrated by Salmah bin al-Akhwa’:

A dead person was brought to the Prophet (ﷺ) so that he might lead the funeral prayer for him. He asked, "Is he in debt?" When the people replied in the negative, he led the funeral prayer. Another dead person was brought and he asked, "Is he in debt?" They said, "Yes." He (refused to lead the prayer and) said, "Lead the prayer of your friend." Abu Qatada said, "O Allah's Messenger (ﷺ)! I undertake to pay his debt." Allah's Messenger (ﷺ) then led his funeral prayer.

That is how the shari’a brought by the Prophet PBUH which not only comes to teach the people to worship and preserving one’s connection with Allah, but also uphold dealings or interactions among humans as something seen as significant in Islam. Other than the event where the Prophet PBUH let only other Companions to perform the janazah prayer, the matter of debt is also stressed out through his saying narrated by Abu Hurairah RA:

"The believer's soul is suspended by his debt until it is settled for him."

Secondly, in the issue of nafaqah, this should be understood properly. This is because, nafaqah is an essential element in marriage which is included under the obligation of a husband upon his wife and dependents.

In the discussions of husband’s nafaqah upon his wife, the fuqaha’ divide it into three types of husband; well-off, average and underprivileged. If the husband is impoverished, it is enough for him to provide the basic nafaqah. Like providing a cup of rice as well as basic lauk according to the local tradition. Next, providing basic clothing to be worn by the wife according to the clothing normally worn by the local people whether indoor or outdoor, enough to cover her awrah as well as following the local Muslim tradition. Next, providing a dwelling within his capability, it is enough by renting. If the impoverished husband fulfils his obligations by providing basic nafaqah, then the wife is not rightful to apply for fasakh. See this discussion in the book al-Mu’tamad (4/283).

Realise that marriage comes with responsibilities of a husband upon his wife. However, be convinced that Allah SWT shall never burden the husband nor oppress him. Have faith that every shari’a of Allah holds its own great wisdom. This is as stated by Allah SWT in al-Quran:

Let a man of wealth spend from his wealth, and he whose provision is restricted - let him spend from what Allah has given him. Allah does not charge a soul except [according to] what He has given it. Allah will bring about, after hardship, ease.

Based on the above texts and arguments, we can conclude in this question that debt and nafaqah are two responsibilities to be fulfilled. However, if the questioner is in a really stringent situation, then Islam has provided a lifeline through the system of zakat which list of recipients includes people in debt. This is as what we explained in the article Irsyad Al-Fatwa Series 131: Al-Gharimin as The Asnaf for Zakat [2]

The same for nafaqah, it is the responsibility of a husband as we explained. So, in this situation, the husband is still wajib to provide for the nafaqah, according to the basic nafaqah rate as the above.

This is because debt is divided into immediate settlement and delayed settlement. So, we also advise those who are involved in debt to learn the financial management technique. This is important in managing and putting what should be prioritized while being able, like basic nafaqah which needs immediate settlement to the wife.

Hence, fiqh awlawiyyat is vital to be comprehend and practiced in the best way. Looking at the importance of financial management, the matter related to the necessities as well as settling debt which may be done simultaneously, but with the minimal amount so that each rights may be fulfilled. By doing so, tranquility and proper financial management plan may ease many life burden carried by all of us who are involved or stuck in the issue presented.

We end this by citing a du’a to be practiced in settling debt and ease one’s burden which will always takes place towards a person:

Abu Umamah said: When I did that Allah removed my care and settled my debt.

May Allah give taufiq and hidayah to all Muslims to understand and practice His shari’a. Ameen.