AL-KAFI #1098: THE AUTHENTICITY OF THE LETTER OF PROPHET PBUH TO KING NEGUS (ABYSSINIAN KING) 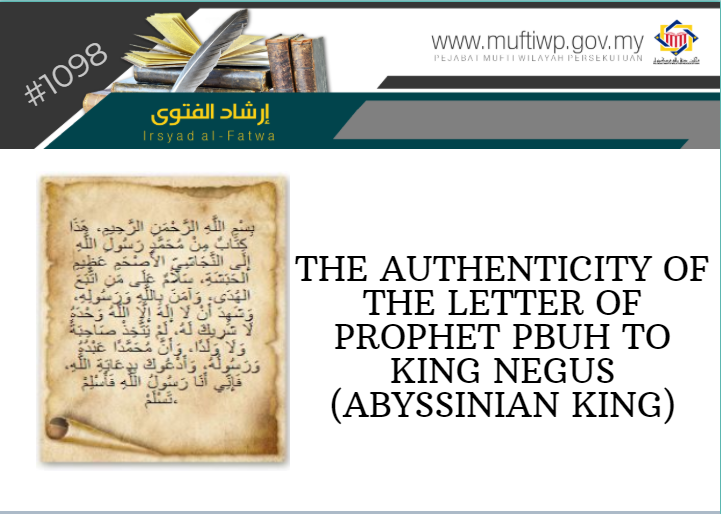 Assalamualaikum SS Mufti. Can Dato’ Seri explain the Prophet PBUH’s letter to the Negus, King of Abyssinia because I once heard that the letter had become a topic of discussion of a prominent researcher, Dr Humaidhullah Baris. Hopefully, we could get a clear explanation regarding this letter from the Prophet PBUH. Thank you.

In answering this question, we are inclined to cite the full statement of a contemporary preacher, Syeikh Sofiyurrahman al-Mubarakfuri through his famous book, al-Rahiq al-Makhtum. He states:

The full name of the Negus is Ashamah ibn Abjar. The Prophet PBUH wrote a letter to him together to Amru ibn Umayyh al-Dhamry on the late 6th Hijri or on Muharram of the 7th Hijri year.

Al-Tabari stated his evaluation upon the letter which shows that it was not written by the Prophet PBUH after the Hudaibiyyah Treaty. It is actually a letter that Ja’afar brought with him when he and his followers emigrated to Abyssinia. In the last paragraph of the letter, it is stated:

“I sent down to you my cousin, Ja’afar as well as a crowd of some Muslims. If he has come to you, accept them and leave the actions of boasting,”

Al-Baihaqi narrated from Ibn Ishaq regarding the letter written by the Prophet Muhammad PBUH to the Negus as follows:

In the name of Allah, the Most Gracious, and the Most Merciful. This is a letter of the Prophet Muhammad to Negus Ashamah, ruler of Abyssinia. Peace for those who follow the guidance and believe in Allah SWT and His Prophet, who bear witness that there is no God except Allah SWT, Who have no partner nor child, and that Muhammad is His servant and Messenger. I call out to you with the call of Islam that I am His Messenger. Be a Muslim, surely you will be safe.

Say, "O People of the Scripture, come to a word that is equitable between us and you - that we will not worship except Allah and not associate anything with Him and not take one another as lords instead of Allah." But if they turn away, then say, "Bear witness that we are Muslims [submitting to Him]." If you refuse it, then you shall bear the sins of all Christian people of your nation. (Refer al-Mustadrak by al-Hakim, no. 4303 and Dalail al-Nubuwwah by al-Baihaqi, 2/308)

A prominent researcher, Dr Humaidullah Baris once presented a text similar to the one presented by Ibn al-Qayyim with a difference of only one word. He already made a research of the text using modern equipment which may uncover important discoveries. This is proven by the following text:

In the name of Allah, the Most Gracious, and the Most Merciful. This is a letter of the Prophet Muhammad to Negus Ashamah, ruler of Abyssinia. Peace for those who follow the guidance. Amma ba’du. I praise Allah SWT before you, that there is none God other than Him, He is the Most Holy Ruler, the Giver of Security, the Guardian. I bear witness that Isa ibn Maryam is blown and his fate is according to His will, which is destined to Mary the virgin, a pure and chaste woman. Then Mary become pregnant with Jesus (Isa) which is by the blowing of Allah SWT. The same when Allah SWT creates Adam with His hand.

Indeed, I call out to you towards Allah SWT the One, Who have no partner, for you to always obey Him, follow and believe with what I convey as I am the Messenger of Allah SWT. Indeed, I call out to you and your army to believe in Allah SWT Azza wa jalla. I have conveyed and gave the advice, so you shall accept this advice of mine. Peace and blessing for those who follow guidance. [1]

He also stressed out that this is the letter written by the Prophet Muhammad PBUH to the Negus after the treaty of Hudaybiyyah. The authenticity of this letter is irrefutable upon analyzing the evidences. However, a claim that this letter was written after the Hudaybiyyah has no basis at all.

What is presented by al-Baihaqi from Ibn Ishaq is similar to the letters written by the Prophet Muhammad PBUH to other Christian kings and rulers after the Hudaybiyyah, where it includes verse 64 of Surah Ali Imran from the Quran. Other attributes are also similar to those of the other letters. The name of Ashamah is also written clearly.

While in my opinion, this text presented by Dr Humaidullah is the most authentic text of the Prophet Muhammad PBUH to the successor of Ashamah after he passed away. Hence, the letter does not contain Ashamah’s name clearly.

I do not have any facts on the sequence except for my instinct after analyzing the letters. What is odd from the claim of Dr Humaidullah is on the text that was written by the Prophet Muhammad PBUH to the successor of Ashamah after Ashamah passed away, while in fact the name of Ashamah clearly stated there in the text. Only Allah is the All-Knowing. [2]

When Amru ibn Umayyah al-Dhamry conveyed the letter of the Prophet Muhammad PBUH to the Negus, he immediately took and read it. He came down from his palace and embraced Islam through Ja’afar bin Abi Talib. He then immediately wrote a letter replying the Prophet PBUH at that time. The letter is written as follows:

In the name of Allah, the Most Gracious, and the Most Merciful. This is a letter for the Prophet Muhammad from the Negus Ashamah. Peace and blessings of Allah SWT are upon you, O the Messenger of Allah SWT. By the name of Allah SWT where there is none other than Him. Amma ba’du. It has come to me the letter of yours, O the messenger of Allah SWT, on regards of Jesus (Isa). Hence, by the name of Rabb the Creator of heavens and earth, indeed, Jesus (Isa) is not more than what you mentioned and he is exactly as what you mentioned. We understand what you have written in the letter you presented to us. And we defended your cousin and the rest of your companions. Hence, I bear witness that you are the Messenger of Allah with a true and assented witness. I already pronounced my oath of allegiance to you and your cousin. I embraced Islam before him, submitting myself to Allah SWT, the Lord of the universe. Refer Zad al-Ma’ad, 3/600)

The Prophet Muhammad PBUH asked the Negus to send back Ja’afar and his followers who emigrated to Abyssinia by two ships together with Amru ibn Umayyah al-Dhamry. They met the Prophet PBUH who at that time was at Khaybar. (Refer al-Sirah al-Nabawiyyah by Ibn Hisyam, 2/359). The Negus Ashamah passed away on Rajab of the 7th Hijri after the war of Tabuk. The Prophet Muhammad PBUH was saddened on that day and performed a ghaib janazah prayer for him. After he passed away and another ruler replaced him, the Prophet Muhammad PBUH wrote another letter to him without any recorded facts whether the successor also embraces Islam or not. [3] (Refer al-Rahiq al-Makhtum, pg. 519)

[3] Most probably taken from the narration of Imam Muslim from Anas, 2/99.