AL-KAFI #1100: THE RULING OF A WIFE CORRECTING THE RECITATION OF HER HUSBAND IN PRAYER 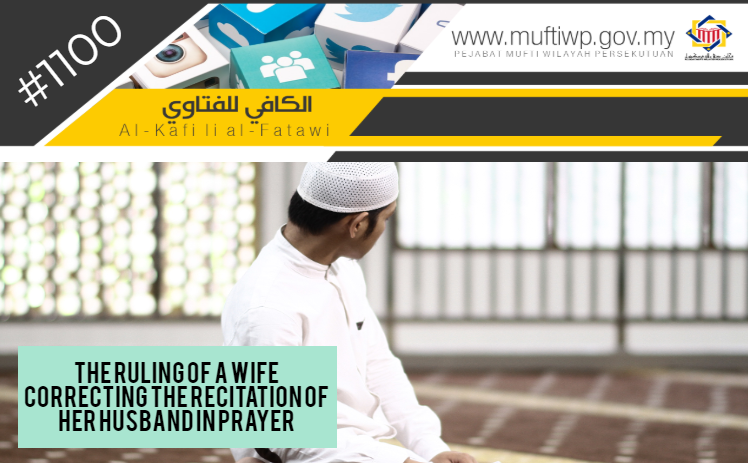 Assalamualaikum. I want to ask, is it permissible for a wife to correct the recitation of a surah of her husband in prayer? For example, if her husband forgets the continuation of a verse. If it is permissible, how should she correct him?

The congregation correcting the imam if he makes a mistake in prayer is a commandment in Islam through the words of the Prophet PBUH:

"The tasbih is for men and clapping is for women."

Scholars agreed that a makmum should correct the imam if the imam makes a mistake or forgets his recitation of the Quran or other actions in prayer. (Refer: Al-Taj wa al-Iklil 2/27, Mathalib Uli al-Nuha 1/485 dan Nail al-Authar 2/373)

Ibn Hajar al-‘Asqalani stated that it is prohibited for a woman to remark the mistake of the imam with tasbih (saying Subhanallah in a loud voice), for a woman is commanded to lower her voice in prayer to avoid fitnah, while men are prohibited to clap for it is synonymous with women. (Refer: Fath al-Bari 3/77)

According to Ibn Abd al-Barr, he cited the opinions of scholars who state that it is makruh (undesirable) for women to call out the tasbih and the permissibility of clapping for them to correct the imam is due to the fact that most women have soft voice that may distract the concentration of the men in congregation. (Refer: Al-Tamhid lima fi al-Muwatta’ min al-Ma’ani wa al-Asanid 21/108)

While Imam al-Zarkasyi state that clapping is for women who are praying in a congregation where there are ajnabi men present; but if the congregation consists of just women and mahram men, then they should correct the imam with loud and clear tasbih. (Refer: Mughni al-Muhtaj, 1/418)

The same is stated in a fatwa issued by Syeikh Nuh ‘Ali Salman and Syeikh Abdullah bin Baz, where he states that it is permissible for a woman to correct the imam, if the only people present is her husband, other women or her mahram. Furthermore, Syeikh Ibn Baz ruled it permissible for a woman to correct the imam in a congregation if there are no other men who did so. The voice of a woman is not aurah, but it is considered as aurah if she speaks in a soft, alluring and sweet tone and this is prohibited in Islam. (Refer to the following link http://aliftaa.jo/Question3.aspx?QuestionId=2202#.XE5-sVwzZPZ)