AL-KAFI #1139: IS IT POSSIBLE TO SEE YOUR BELOVED CAT ONCE AGAIN IN PARADISE? 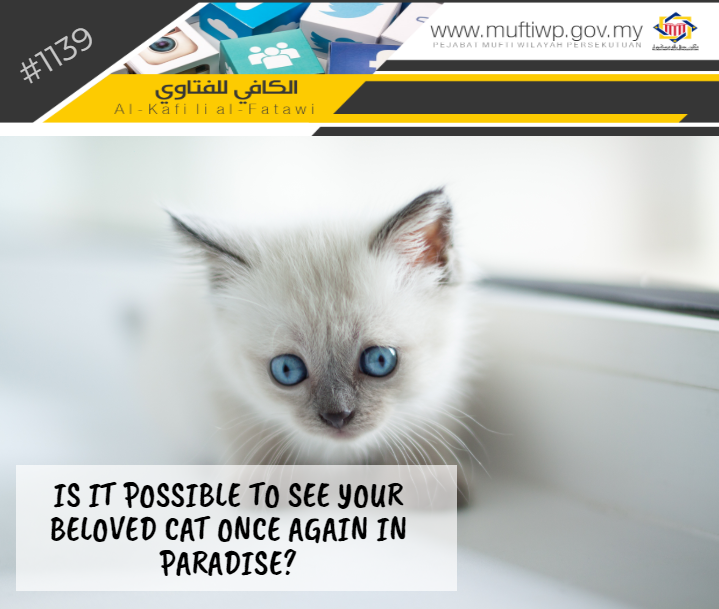 Assalamualaikum Mufti, is it possible for me to see my beloved cat who died again in the hereafter?

As Muslims we are commanded to do good to all creations of Allah SWT. This includes doing good to other people, whether they are Muslims or non-Muslims as well as treating animals with compassion. This is as narrated by Syaddad bin Aus RA, where the Prophet PBUH said:

This hadith clearly states the obligation of ihsan towards every living creature. Syeikh Abd al-Rahman bin Nasir al-Sa’di said: “It includes ihsan for all categories of humans and animals. Even when one is slaughtering animals, he is commanded to practise ihsan.” Refer Bahjah Qulub Al-Abrar, Al-Sa’di (1/127).

Thus, we would like to state that it is wajib to have ihsan towards animals, thus, oppressing or being cruel towards them is prohibited by syarak and it is haram. Furthermore, negligence in taking care of them could lead to a person being thrown into hell. This is in accordance with  the narration from Abdullah bin ‘Umar RA where the Prophet PBUH said:

"A woman was tortured and was put in Hell because of a cat which she had kept locked till it died of hunger." Allah's Messenger (ﷺ) further said, (Allah knows better) Allah said (to the woman),

'You neither fed it nor watered when you locked it up, nor did you set it free to eat the insects of the earth."

Coming back to the question presented, regarding whether it is possible for a person to meet with his beloved pet again in the hereafter. The following we share a narration from Abu Hurairah RA where he said:

“Indeed, Allah will assemble all of creations (on the day of Judgement). (Of which includes) every animal, bird and human. Then, Allah will say to the animals and birds: “Change to soil.”

This proves that, the situation of animals and humans in the hereafter is different from each other. From the aspect of their deeds, they are not judged for their good or bad deeds, as well as they are not placed in paradise like pious people do. Consequently, all animals will turn to dust and soil in the hereafter.

However, as we know, all the residents of paradise are promised countless blessings and rewards. This is stated in numerous evidences, among them is a statement of Allah SWT:

“They will have whatever they wish therein, and with Us is more.”

“For them therein is fruit, and for them is whatever they request [or wish],”

Imam al-Baghawi said: “For them (the people of paradise) is anything that they desire and they wish for.” Refer Tafsir al-Baghawi (7/22).

As a conclusion, we would like to state that every person should prioritize and strive to ensure that he is placed by Allah SWT in paradise by doing good deeds in this world. As we all know, taking care of the welfare of pets and animals is included as good deeds that could lead a person to paradise.

Thus, when a person has succeeded in attaining paradise, then surely, all his desires and wishes will be granted by Allah SWT as his reward. This is the promise of Allah SWT:

“And therein is whatever the souls desire and [what] delights the eyes,”

Imam al-Thabari when commenting on the verse included a narration where a Bedouin asked the Prophet PBUH:

“O Rasullullah, I love camels. Is there going to be camels in Paradise?” Then, the Prophet PBUH answered: “O Bedouin, if Allah places you in paradise Insha Allah, then you will find everything that you wanted and everything that delight your eyes.”

Lastly, may Allah SWT give us the correct understanding in religion. Amin.