AL-KAFI #519: THE MEANING OF TAKHBIB (HOMEWRECKER) 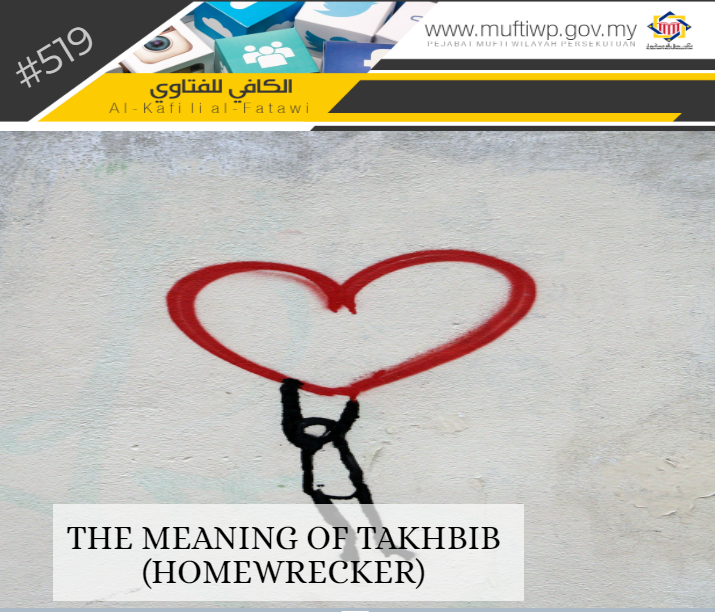 What is takhbib? My husband is involved in his friend’s marital dispute (female friend) and he would often advise her but it only made matters worse which then lead her to get a divorce. At the same time, their relationship grows to more than just being friends. After her divorce, my husband felt bad and sorry for her that he intends to marry her. Is my husband sinful and what is the status of their (second) marriage, is it valid?

The phrase takhbib lexically and technically means a man who besmirches the slave or wife of others, while al-khabb means destruction, vileness and deception. Refer Mausu`ah al-Fiqhiyyah al-Kuwaitiyyah (11/18). Islam forbids one’s action that destroys the relationship of a wife with her husband. It is narrated from Abu Hurairah that the Prophet PBUH said:

The Prophet (ﷺ) said: If anyone corrupts (instigates) the wife of a man or his slave (against him), he is not from us

It is narrated from Abu Hurairah RA that the Prophet PBUH said:

"The believer is naively noble and the stingy person is deceitfully treacherous."

It is narrated from Abu Bakar al-Siddiq RA that the Prophet PBUH said:

"The swindler, the stingy person, and the Mannan shall not enter Paradise."

Imam Abu al-Ala al-Mubarakfuri in Tuhfah al-Ahwazi (6/83-84) when commenting on this hadith said ‘shall not enter Paradise’ means that he is delayed from entering Paradise. Khibbun or khabbun means a liar who destroys relationship among humans by his deception.

The scholars are of the opinion that takhbib is haram. They are of the view that a person who destroys others’ marriage by deceiving or causing the wife to ask for divorce, then he has committed a great sin. This also includes presenting that divorce is good so that he can get married to the woman or enable others to marry the woman. Refer Mausu`ah al-Fiqhiyyah al-Kuwaitiyyah (5/291) & (11/19).

Some jurists stated clearly that the man should be punished with punishments that will constrict or warn him (possibly like being put in jail, being excluded or boycotted, exiled and etc.), in fact, some Maliki scholars stand by the punishment of prohibiting nikah by ta’bid (forever) between the woman who was deceived and the deceiver man. Refer Fath al-Ali (1/397).

Looking at the stated case above, our strong instinct says that the ‘advice’ given by the husband to the questioner is support towards divorce. Especially when the questioner said that ‘at the same time, their relationship becomes more than just friends’ even before the divorce takes place. This shows that there is a prohibited relationship between a man and another person’s wife. When divorce happens, the questioner’s husband intends to marry the said woman.

We are of the opinion that takhbib already made by the questioner’s husband and he should repent from that action. In madhhab al-Shafi’e, a divorced woman is not prohibited to marry the man who did the takhbib. So, if they get married, their marriage is valid but is burdening the sin of takhbib. It is wajib for both of them to repent and regret their actions. It is best if she is in the period of iddah to do some reconciliation between her and her newly ex-husband. This issue of betrayal cannot be seen as simple because there are possibilities that one day the same thing may happen towards the questioner’s husband.

Hence, we suggest that when a marital dispute and crisis happen, it is best to discuss properly and ask for marital advice from pious and knowledgeable people. Also, as the last resort, kindly refer to the accredited marriage counsellor at respective Religious Council to resolve the confusion that happened and search for the point of reconciliation in order to maintain a harmonious marriage. We end this with a du’a: