AL-KAFI #1163: SUPPLICATING FOR SOMEONE BY PLACING ONE’S HANDS ON THE HEAD OR CHEST OF THE PERSON 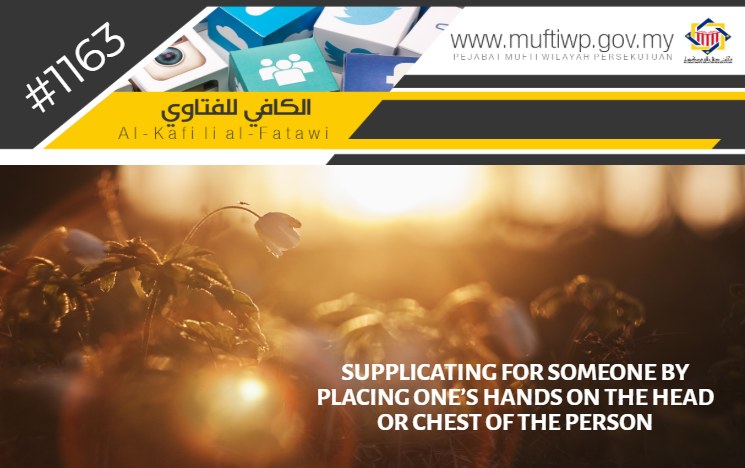 Supplication is a type of worship showing that a slave is in need of Allah SWT. (See al-Azkar by al-Nawawi, pg. 395)

Imam al-Khattabi said: “Supplication is a request for help by a slave to his Creator. The reality of supplication is showing one is in need, weak, deprived and depend on Allah SWT where it also shows the honour, glorification and greatness of Allah SWT at the same time acknowledging His honour and blessings.” (See Sya’n al-Dua’, pg. 4)

It also means asking with full hope to Allah SWT to be given goodness from Him, asking humbly, so that the request is granted. (See Jawami' al-Du'a min al-Qur'an wa al-Sunnah by Muhammad Sayyid Tantawi, pg. 5)

We state here that supplication is a form of worship and it is also said to be the essence of worship. This is in accordance with the hadith:

“The supplication is the essence of worship.”

Since supplication is a type of worship, most scholars consider worship is restrained according to the Quran and Sunnah. This is stated by usul scholars:

“The original ruling for acts of worship is restrained (according to the Quran and Sunnah).”

This is the maxim used for most scholars, such as Ibn Hajar in Fath al-Bari. The same is stated in Syarh Zaid Ibn Ruslan, in Syarh al-Zurqani for al-Muwatta', also in al-Adab al-Syar'iyyah by Ibn Muflih and Nail al-Autar by Imam al-Syaukani.

The meaning from the maxim is clear, where it states for anyone who wants to perform any worship should refrain himself until he knows that Allah SWT rule it permissible. This maxim is also used by Imam Ahmad and hadith scholars.

Reviewing on hadiths related to this issue, we found several narrations regarding it. Some of them are:

This is popular during the supplication in marriage where a husband supplicates while placing his hands on the head of his wife. From Abdullah Ibn Amr R.Anhuma, the Prophet PBUH said:

“When anyone of you gets a new wife, a servant, or an animal, let him take hold of the forelock and say: Allahumma inni as`aluka min khayriha wa khayri ma jubilat 'alaihi, wa 'audhu bika min sharriha wa sharri ma jubilat `alaih (O Allah, I ask You for the goodness within her and the goodness that she is inclined towards, and I seek refuge with you from the evil to which she is inclined).' ”

This proves that it is permissible to place one’s hands while supplicating for someone.

The name of the man is Fudhalah bin Umair al-Laithi. His story is recorded in various Sirah and Tarikh books, but the status of this narration is very weak. Among the books that mentioned this narration are al-Sirah al-Nabawiyyah by Ibn Hisyam (5/80), Zad al-Ma'ad (3/361), al-Sirah al-Nabawiyyah by Ibn Kathir (3/584) al-Raudh al-Unf (4/176), al-Iktifa' bima Tadammanahu min Maghazi Rasulillah (2/190) and others.

Hence, in our opinion, it is permissible to place one’s hands on certain places, but the ruling between non-mahram man and woman who are not married should be of consideration.

The Prophet (ﷺ) used to treat some of his wives by passing his right hand over the place of ailment and used to say, "O Lord of the people! Remove the difficulty and bring about healing as You are the Healer. There is no healing but Your Healing, a healing that will leave no ailment."

Al-Hafiz Ibn Hajar cited the opinion Ibn Battal who said, placing hands on a patient trying to comfort and relieve the pain, supplicating for recovery and remedy according to what he knows. And it is possible that the Prophet PBUH used his hands to ruqyah (ask for recovery) on the place affected which leads to it being cured. (See Fath al-Bari, 10/126)

We end this discussion with the following supplication: