AL-KAFI #1171: THE RULING OF PARENTS USING THE MONEY OF THEIR CHILDREN 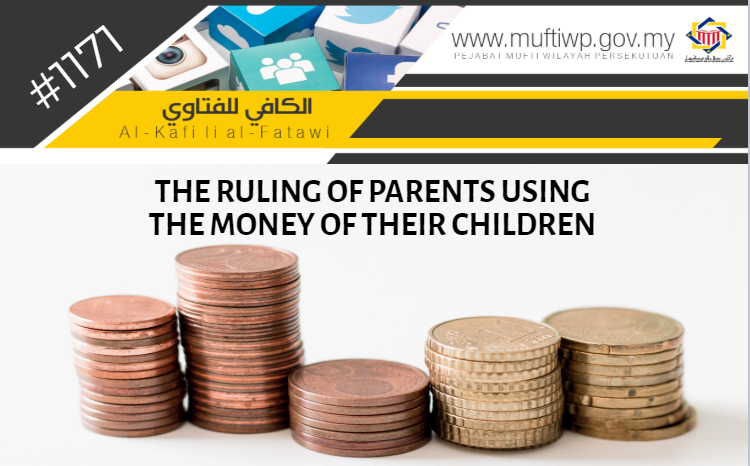 In our daily lives, things are growing more and more challenging, for the usual case is the daily expenses exceed one’s income. Hence, our society is becoming more creative to have a better life. Among the questions asked are regarding the usage of children’s property such as their savings in order to meet the daily expenses. Here, we share the opinions of scholars and their simplified discussion regarding this issue.

Jumhur (majority) of jurists (fuqaha’) in madhab al-Syafi’e, Hanafi and Maliki hold the opinion that a father is impermissible to use or take the property of his children unless if it is a necessity. See Mughni al-Muhtaj (3/446), Hasyiyah Ibn ‘Abidin (4/513), Hasyiyah ad-Dasuqi ‘ala al-Syarh al-Kabir (2/522)

"Allah has made your blood, your properties and your honour Sacred to one another (i.e. Muslims) like the sanctity of this day of yours in this month of yours, in this town of yours."

Al-Mubarakfuri Rahimahullah said: “Indeed, your blood, properties and honour is sacred and prohibited from being taken from among you on the days of honour which is the day of Arafah (another opinion: Eidul Adha day), and in this town which is in Mecca.” See Tuhfat al-Ahwazi (8/382)

Jurists’ opinion in madhab Hanbali states a father has the absolute right to take the property of his children, whether the child is still young or a grown-up under two conditions:

They supported their opinion using the following hadith of the Prophet PBUH:

"O Messenger of Allah, I have wealth and a son, and my father wants to take all my wealth." He said: "You and your wealth belong to your father."

Regarding the above hadith, after citing the opinions of scholars such as ad-Daruqutni, Ibn Qattan and al-Munziri Rahimahumullah, al-Hafiz Ibn Hajar al-‘Asqalani Rahimahullah commented: “The combination from the chain of narrators for this hadith does not weaken it and it is permissible to be used as evidence to support an argument.” See Fath al-Bari Syarh Sahih Bukhari (5/211)

Al-Hafiz al-Suyuti Rahimahullah said: “This hadith’s sanad is sahih, the narrators are thiqah (trustworthy) according to the conditions set by Imam al-Bukhari and have syahid (another chain of narrators with the same text) from the narration of ‘Aisyah RA.” See Misbah az-Zujajah fi Zawaid Ibn Majah (3/37)

The scholars have differing opinions on whether it is permissible for a mother to use her children’s property if there is a necessity for it and if she is included in the hadith: “أَنْتَ وَمَالُكَ لأَبِيكَ”

Some scholars state that the mother is not included as what the hadith meant. Ibn Qudamah al-Maqdisi Rahimahullah said: “It is impermissible except for the father to take the property of his child without asking permission from the child. The reason is, the hadith is intended for the father (أنت ومالك لأبيك) and it is invalid to analogically deduce (qiyas) the father to anyone else for a father has the authority on his child and the property of the child when the child is young.” See al-Mughni (5/397).

Some scholars hold the opinion that the mother is included as the meaning of the hadith. They support their opinion with the words of the companion of the Prophet PBUH, Abdullah bin Jabir RA:

They also argued using the narration from Atho’ bin Abi Rabah and al-Zuhri who ruled it permissible for the mother to take the property of her child the same as for the father. See al-Mudawwanah (2/264)

In our opinion, the majority of the scholars’ state, it is impermissible for a father to take the property of his children as he pleases and it is only permissible in dire situations for this is the accurate way in terms of the objective of syara’. This ruling is also applicable to the mother of the child. Regarding the hadith (أَنْتَ وَمَالُكَ لأَبِيكَ), the scholars answered it with two answers:

Ibn al-Qayyim al-Jauziah Rahimahullah said: “The letter lam in the hadith (أَنْتَ وَمَالُكَ لأَبِيكَ) does not mean absolute ownership, whoever said that it refers to the permissibility to use it, then this is the accurate meaning of the hadith. If not, then the wisdom and meaning of the hadith will not be accomplished.” See I’lam al-Muwaqi’in ‘an Rabb al-‘Alamin (1/116)

Imam al-Syafie Rahimahullah said: “Indeed, when Allah SWT obligates the father to inherit the property of his child, He made the father similar to the child’s other heirs and there is even a possibility that the father will receive a smaller portion than the other heirs. This proves the child is the one who has complete ownership of his property and not others.” See ar-Risalah (pg. 468)

To conclude, it is impermissible for the parents to use the money of their children as they wish except when there is a necessity for it. If the parents have used the property of their needs for necessity, then it is obligatory for them to repay the money.

May Allah SWT give us goodness and the correct understanding in his commandments and subsequently grant us the strength to practice it. Amiin.