AL-KAFI #1216: THE RULING OF BURNING ANTHILL 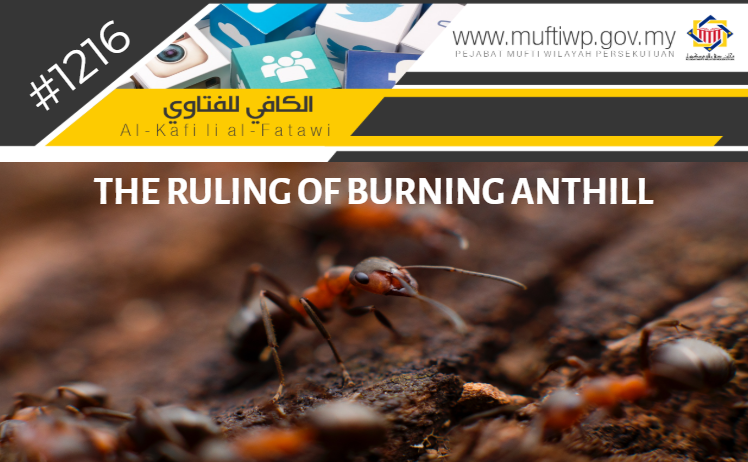 Assalamualaikum SS Mufti, is it permissible to kill fire ants by burning the anthill?

“Verily Allah has enjoined goodness (ihsan) to everything;”

The above hadith clearly states the obligation of doing good to every creation. Syeikh Abd al-Rahman bin Nasir al-Sa’di said: “Doing good includes ihsan (compassion/proficiency) towards all humans and animals. Even when it is time to slaughter animals, we are commanded to have compassion (proficiency).” Refer: Bahjah Qulub Al-Abrar, Al-Sa’di (1/127).

According to fiqh, the word كَتَبَ indicates obligatory. This is stated by Imam Ibn Rajab al-Hanbali: “The word al-kitabah brings about the obligatory ruling of it according to jurists and usuliyyun, though some scholars have differing opinions regarding this matter. However, it is known that the usage of the word al-Kitabah in the Quran is for matters which are obligatory.” Refer: Tafsir Ibn Rajab (1/617).

Hence, when we say that being compassionate to animals is an obligation, then hurting and harming animals without any valid reasons stated by syarak is prohibited. Furthermore, neglect taking care of animals may lead to someone ended up in hellfire. This is in accordance with a narration from Abdullah bin Umar RA, the Prophet PBUH said:

"A woman was tortured and was put in Hell because of a cat which she had kept locked till it died of hunger."

'You neither fed it nor watered when you locked it up, nor did you set it free to eat the insects of the earth."

Coming back to the question asked, we share a hadith by Hamzah al-Aslami, where the Prophet PBUH said:

“And do not burn him, for no one punishes with fire except the Lord of the fire.”

However, there is an exception for animals that are harmful where there is no other way to kill it unless by using fire. This is in accordance with a hadith from Abu Hurairah RA, where the Prophet PBUH said:

"Once while a prophet amongst the prophets was taking a rest underneath a tree, an ant bit him. He, therefore, ordered that his luggage be taken away from underneath that tree and then ordered that the dwelling place of the ants should be set on fire. Allah sent him a revelation:-- "Wouldn't it have been sufficient to burn a single ant? (that bit you).”

Scholars state that among the wisdoms that can be taken from the above hadith is: Only the ant that bit the prophet is an exception towards the general prohibition of burning and using fire to kill. It is permissible to kill harmful animal with fire by burning it, if there is no other way to prevent it from harming people.

To close, we would like to state that it is impermissible to burn fire ants’ anthill without any reason. Especially if the fire ants do not harm anyone. This is the blessing of Allah SWT for all creations, while showcasing our compassion for other creations which is an obligation for everyone.

Lastly, may Allah SWT give us the true understanding in practising our religion. Amin.