AL-KAFI #1230: HUMANS ARE HONOURED COMPARED TO OTHER CREATIONS 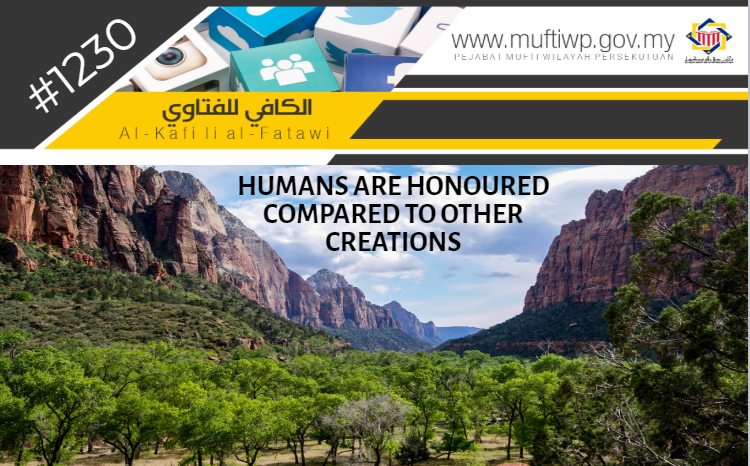 Assalamualaikum Dato’ Seri Mufti. Can you explain the honour that Allah SWT has blessed humans with? Hope for an explanation. Thank you.

“We have certainly created man in the best of stature;”

Allah SWT as the All-Knowing Creator made humans as the best of creations, honoured compared to other creations. Allah SWT state:

“And We have certainly honored the children of Adam and carried them on the land and sea and provided for them of the good things and preferred them over much of what We have created, with [definite] preference.”

Syeikh al-Maraghi stated that Allah SWT has honoured the children of Adam with good looks, tall stature and ability to think that enables them to learn various languages, think and contemplate in improving their livelihood and exploiting everything in the skies and earth. We honoured humans with animals, cars, aeroplanes, balloons and ships as their mode of transportation. (See: Tafsir al-Maraghi, 8/3996-3997)

In short, the honour and dignity Allah SWT blessed humans with is the mind that they have for they are able to think, differentiate between the right and wrong and between the true and deviant teachings. The verse commanded humans to be grateful and not associate anything with Allah SWT. The reason is, Allah SWT made everything on land and at sea for the benefit of humans, as He will. (See: Tafsir al-Maraghi, 8/3997)

Hence, it is obligatory for us to use our mind, the blessing Allah SWT has given us to contemplate on His greatness and obeying all of Allah SWT’s commandments. In the Quran, Allah SWT state:

Say, "Observe what is in the heavens and earth."

The above verse clearly states: “Look with your eyes and your heart, whatever that is on the skies and the earth such as the twinkling stars and its unique placement (used for navigation), the sun, the moon, clouds and rain, wind and water, night and day and its interchanges.” (See: Tafsir al-Maraghi, 6/3121)

How disgraced are humans when they are rebuked by their own Creator eleven times in the Quran with the phrase “أَفَلَا تَعْقِلُونَ”, for those who refuse to think. The rebuke dishonours them greatly that they become more disgraced than farm animals.

Or do you think that most of them hear or reason? They are not, except like livestock. Rather, they are [even] more astray in [their] way.

In this issue, we would like to state that humans are certainly honoured by Allah SWT, being blessed with rational mind that is able to think and contemplate, different from other creations. Although humans may have a smaller and weaker body than some other creations of Allah SWT, however, with the ability to think, humans are able to control and manage other creations. For example, a dog’s ability to smell something is far greater than humans’ and humans are able to train dogs to use their ability in drug busting operations. The dogs are under the control and supervision of humans. The same goes with the invention of tools and apparatus, all of it is thanks to human’s ability to think and design new things.

Hopefully, with this discussion, we realize how grateful we should be to Allah SWT for His boundless blessings upon us. Amin.

We close this discussion with a supplication to Allah SWT for His blessing upon us:

"My Lord, enable me to be grateful for Your favor which You have bestowed upon me and upon my parents and to do righteousness of which You approve. And admit me by Your mercy into [the ranks of] Your righteous servants."