AL-KAFI #1233: THE RULING OF PRAYING WITHOUT COVERING ONE’S HEAD FOR MEN 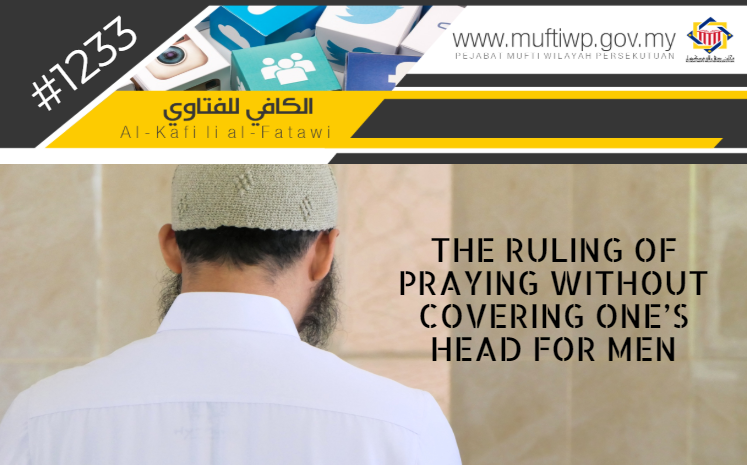 Is it true that praying without wearing kopiah, songkok or turban [headdress/head covers worn in South East Asia] is makruh (undesirable) for men? Hope for an explanation from SS Mufti.

According to the original ruling, the prayer of a man without covering his head is valid as stated by scholars such as Imam al-Nawawi. (Refer: Al-Majmu’ Syarh al-Muhazzab 2/51)

However, it is undeniable that there are scholars who ruled it makruh (undesirable) for man to pray without covering his head. According to Syeikh Abu Bakar al-Dimyathi, a scholar of madhab Syafi’e stated – not covering one’s head and shoulders for men while praying is makruh (undesirable), for it contradicts the sunnah of beautifying one’s clothing while praying by covering one’s head and shoulder. (Refer: I’anatu al-Tolibin 1/194)

The same is stated by al-Imam Ibn Nujaim al-Hanafi and al-Imam Burhanuddin ibn Mazzah who ruled it makruh to pray without covering one’s head if he has a head cover but decided to not wear it due to his laziness. (Refer: Al-Bahr al-Ra’iq 2/27, Al-Muhith al-Burhani 5/137)

However, his opinion should be further considered, taking into account of the context of time and place.

“O children of Adam, take your adornment at every masjid, and eat and drink, but be not excessive. Indeed, He likes not those who commit excess.”

Then, the ruling for this particular issue depends on the difference of the custom of the society and style of their clothing. If they consider covering one’s head as a form of adornment, then it is considered as sunnah. (Refer the official website of Jordan’s National Fatwa Committee through the link: https://bit.ly/2FTDfdq)

To conclude, we state that kopiah, turban and songkok are the examples of beautiful and good clothing which have been worn by Muslims and is considered as sunnah.

In a famous Islamic legal maxim, it is stated:

“The custom and practise is considered as the ruling of it (on matters of which there is no evidence for it),”

“You should wear imamah (turban) for it is a sign of the angels and lengthen it on your backs.”

Here, we state according to the custom of the place, praying without covering one’s head with songkok, turban or kopiah is considered as khilaf al-aula (contradicting the prioritized matter) and not ruled as prohibited (haram) or makruh.

Hopefully, this explanation will give us understanding in religion especially in the issues of clothing in our daily lives. We end this discussion with the following supplication: