AL-KAFI #1289: IS IT NECESSARY TO REPLACE FAULTY PRAYERS DURING TRAVEL (MUSAFIR)? 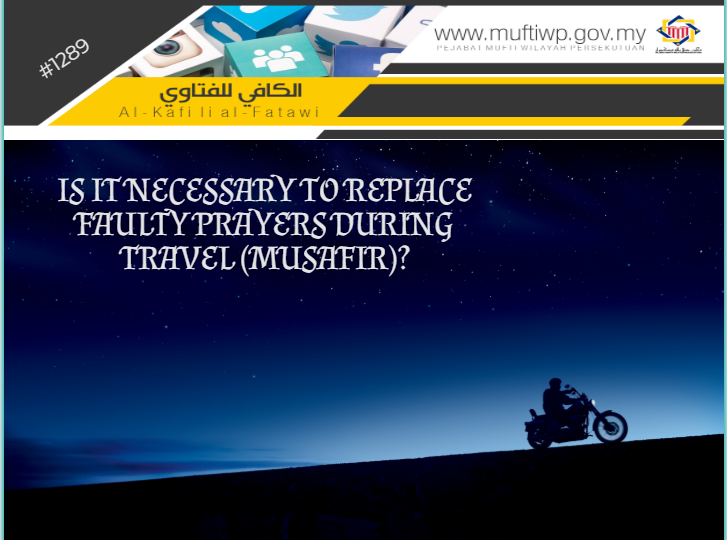 Assalamualaikum ustaz. After reading the explanation of al-kafi #926, I then understood that if I intend to travel, but stay in a region for more than three days, it is impermissible for me to pray in jama’ and qasar throughout the period of my stay. So, what is the status of my prayers; since I prayed by jama’ and qasar before without following its condition? Are they rejected and should be replaced?

Generally, Islam permits those who travel with a distance of greater than two marhalah to shorten (qasar) their prayers of Zuhr, Asr and Isha’. Islam also permits them to combine the two prayers in one time or said as jama’. There are two categories of jama’; taqdim and ta’khir.

Each qasar and jama’ has its own conditions to make them valid, hence fulfilling the commandment of daily prayers. Failures in fulfilling the conditions may result to the invalidation of prayers, and the person should replace them by a complete original way of prayers (without jama’ and qasar).

The issue raised is the differences between the status of a musafir and a muqim according to the numbers of days one intends to stay in a particular place. In mazhab al-Syafi’e, one of the validators of shortening (qasar) the prayer is, not intending to stay for four days in an intended place except of the arrival and the departure days. Refer al-Fiqh al-Manhaji (page 187)

“An Emigrant is allowed to stay in Mecca for three days after departing from Mina (i.e. after performing all the ceremonies of Hajj)"

Imam Abu Ishak al-Syirazi said before using this hadith as an evidence: “If a musafir intends to muqim (stay) for four days excluding the arrival and departure days, then he automatically becomes a muqim (due to this intention), and the rukhsah (facilitation) of his travel is negated because intending to stay for three days does not make a musafir becomes muqim”

Regarding the evidence of combining (jama’) prayers during travel, it is narrated by Ibn Abbas RAnhuma, he said:

Next, a narration of Ibn Abbas R.Anhuma:

Ibn 'Abbas reported that the Messenger of Allah (ﷺ) combined the prayers as he set on a journey in the expedition to Tabuk. He combined the noon prayer with the afternoon prayer and the sunset prayer with the 'Isha' prayer. Sa'id (one of the rawis) said to Ibn 'Abbas: “What prompted him to do this? He said: He wanted that his Ummah should not be put to (unnecessary) hardship.”

Hence, if one intends to stay in a particular place for four days and more, excluding the arrival and departure days, he is categorized as muqim (resident) in that place once he reaches it. He is also obligated to observe the rulings as a resident, like the rulings of tamam (the opposite of qasar, which means the complete 4 rakaat of a prayer) and performs Jum’ah prayer if he fulfills the conditions of being considered as a resident.

Exceptions are given if he intends to stay in that particular place due to some unsettled or unavoidable circumstances on these three days, like a strong wind, or waiting for other person to travel together. This also applies to car breakdowns or the shortage of bus tickets, and so on. This person can combine his prayers as well as shorten them up to 18 days. Refer Syarh al-Muqaddimah al-Hadhramiyyah (page 371) by Habib Sa’ied Ba’Isyn.

According to the stated facts, one who intends to do jama’ and qasar in a destination with the intention of staying there more than 3 days excluding the arrival and departure days, should replace his prayers that were done by following the rulings of jama’ and qasar. He should count with all his might number of said days by referring to any reliable resources, like diaries, calendar, personal writings, or asking those who travel with him. If there is any doubt between two numbers, like between 10 and 15 days, just take the highest one as precaution.

However, not all prayers are to be replaced. For example, Maghrib prayers are not to be replaced if it was done by ta’khir, as it is considered as already replaced, so it is enough to freeing the obligation, although it still is considered sinful if practiced intentionally. This also includes prayers that cannot be combined or shortened, which is the Subh prayers. If the prayers merely were combined, but not shortened, then it is only obligated for him to replace the ‘Asr and Isha’ prayers performed by jama’ taqdim. It is not obligated for those performed by jama’ ta’khir as they were performed in their own time. Wallahua’lam.

To conclude, let’s make du’a for Allah SWT to give us understanding and strength to perform our act of worships obligated upon us. Amen.