AL-KAFI #1324: THE RULING OF USING THE PRAYER AREA FOR TAEKWONDO DEMONSTRATION 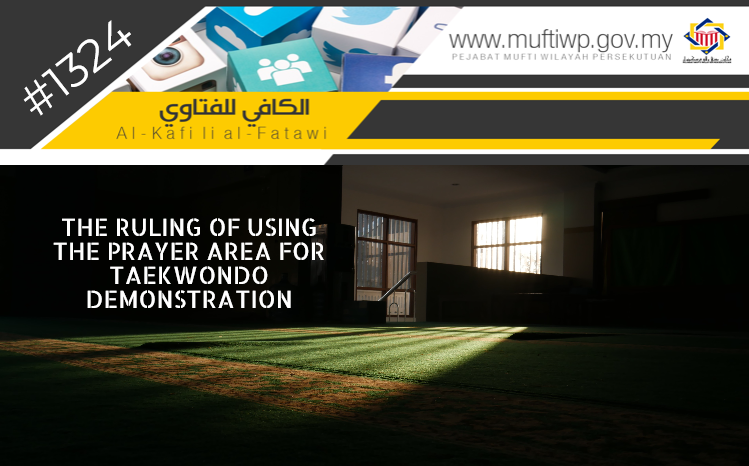 Allah SWT honours mosques as a place of worship for Him. Allah SWT characterized the people who deserve the right to enliven the mosques are from those who believe in Him and the hereafter, Allah SWT states in the Quran:

“The mosques of Allah are only to be maintained by those who believe in Allah and the Last Day and establish prayer and give zakah and do not fear except Allah, for it is expected that those will be of the [rightly] guided.”

Furthermore, a mosque is a beloved place of Allah as stated by the Prophet PBUH:

Indeed, mosque should be the place of worship only to Allah SWT. This is in accordance with the statement of Allah SWT:

“And [He revealed] that the masjids are for Allah, so do not invoke with Allah anyone.”

“[Such niches are] in mosques which Allah has ordered to be raised and that His name be mentioned therein; exalting Him within them in the morning and the evenings.”

Ibn Kathir commented on the above verse stating that, it is a commandment from Allah SWT to honour the place of worship, by revering and purifying it from bad and useless matters which also include actions and words that should not be done or said in it. (Refer Tafsir Ibn Kathir, 6:62)

This also involves worldly matters such as trade in mosque where it is prohibited. This is in accordance with a hadith narrated by Imam al-Tirmizi RA:

When commenting on the above hadith, Syeikh al-Mubarakfuri RA cited the words of Imam al-Nawawi in his book Tuhfah al-Ahwazi by saying:

The hadith showed a prohibition from raising one’s voice to find a lost item in a mosque and also similar matters such as buying and selling, giving loans, aqad (contract) and others. It is makruh (undesirable) to raise one’s voice in a mosque. (Refer Tuhfatul Ahwazi: 4:458)

In our opinion, any worldly matters that are a distraction and raising one’s voice in mosques or surau is an act that dishonour their purity. Furthermore, it also disrupts the peace in the mosque as a place of worship. Thus, activities that involve active and vigorous motions such as taekwondo which also involves raising a person’s voice is included as an action that dishonours and disrupts the peace of the mosque.

According to the above discussion, we are of the opinion that taekwondo demonstration or other similar activity that does not involve the act of worship towards Allah SWT which dishonours the mosque should be avoided.

Consequently, we suggest that such activities should be held in an appropriate place such as in a hall or terrace of the mosque. As for the prayer area of the mosque, it should be specified only for acts of worship and getting closer towards Allah SWT. The reason is it is to protect and maintain mosque and surau as the eminence of Islam that are built from the piety of the heart as stated by Allah SWT:

“That [is so]. And whoever honors the symbols of Allah – indeed, it is from the piety of hearts.”

May Allah SWT bless us with guidance in practising His commandments the best we could. InshaAllah.