AL-KAFI #1365: IS IT NECESSARY TO GET THE CONSENT OF THE HEIRS FOR HIBAH? 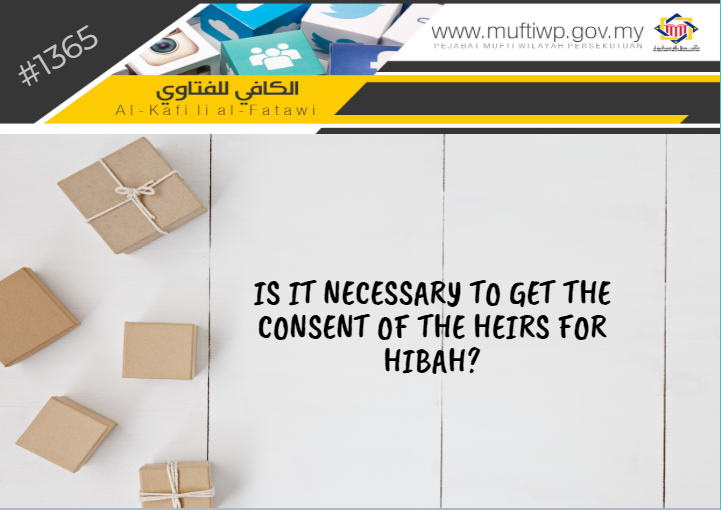 Assalamualaikum SS Mufti, I want to ask a question regarding hibah. My mom gave one of her grandchildren a plot of land in the form of hibah without the knowledge of any of our family members. What is the ruling for this?

Hibah is a gift to someone so that he could benefit from it. It is a physical gift from a person when he was still alive without hoping for anything in return. Syeikh Muhammad Zuhaili stated in his book:

“Hibah according to fiqh terminology means turning over of ownership to another person without getting anything in return (iwad) while one is still alive. Hibah, gift and donation have a similar meaning.” (See al-Mu’tamad fi al-Fiqh al-Syafie, 3/175)

“Hibah is an agreement contract with the purpose of voluntarily turning over an ownership without getting anything in return (iwad) while one is still alive.” (See al-Fiqh al-Manhaji, 6/115)

The Sanctioning and Ruling of Hibah

There are evidences in the Quran, sunnah and ijma’ (majority of scholars) in encouraging the act of hibah in helping and developing the bond of silaturrahim.

Syeikh Muhammad Zuhaili state, if a person’s wife gives (hibah) to her husband a part of her mahar (dowry), then it is permissible for her husband to take it. And it is considered as a good gift as long as she does it voluntarily. (See al-Mu’tamad fi al-Fiqh al-Syafie, 3/176)

The jurists agreed that any form of hibah is sunnah. However, it can change to prohibited if the purpose of the hibah is for something sinful or helping in cruelty, unjust matters and bribery. Hibah can also be makruh if it is for the purpose of showing off and being arrogant. (See al-Mausu’ah al-Fiqhiyyah al-Kuwaitiyyah, 42/122)

Requisite and Conditions of Hibah

Hibah is considered as valid if it fulfils its conditions and requisites. Syeikh Muhammad Zuhaili divide the requisites of hibah into three general categories and five specific categories, which are:

When the akad, ijab and qabul for hibah is completed, but the recipient hasn’t received the hibah yet, then the ownership hasn’t changed yet. Thus, the giver has a right to retract the hibah as long as the hibah is not given to the recipient. Syeikh Muhammad Zuhaili said:

“It is not considered as the recipient’s as long as the recipient has not received the hibah (qabd). Thus, the giver has a right to retract his gift.” (See al-Mu’tamad fi al-Fiqh al-Syafie’, 3/182)

This is as stated in a hadith narrated by al-Hakim with an authentic sanad, where it states:

“When the Prophet PBUH married Ummu Salamah R.Anha, he said to her: “I gave a Najashi a few ounce of musk and adornments but I think he has passed away. I think that my gifts will be returned to me and when they are returned, they will be yours. Just as it was said about the death of the Najashi, when the gifts are returned, the musk is returned to the wives of the Prophet PBUH and the rest are given to Ummu Salamah, afterwards she also received the rest of the adornments.”

Hence, if the akad for hibah is in force before the recipient received it, surely the Prophet PBUH would not accept the returned gifts and he would distribute it the heirs of the Najashi as their inheritance. (See al-Fiqh al-Manhaji, 6/126)

Coming back to the above question, if the requisite and conditions for hibah are fulfilled with documented evidence of the hibah, then the hibah is valid when she is still alive. The giver does not need the consent of others to gift his property as hibah. The reason is, it is not included as one of the conditions for the giver or recipient of hibah and the property already given as hibah cannot be taken back.

Furthermore, hibah is a sanctioned act in Islam. It is even encouraged to give to one’s family members and close relations with the purpose of nurturing one’s silaturrahim. Allah SWT state:

“And gives wealth, in spite of love for it, to relatives, orphans, the needy, the traveler, those who ask [for help], and for freeing slaves,”

May Allah SWT give us understanding and guidance in understanding His religion and practise His commandments the best we could. Amin.