AL-KAFI #1368: THE RULING OF COMMANDING CHILDREN WHO HAVEN’T REACHED PUBERTY (BALIGH) TO REPLACE (QADHA’) THEIR PRAYERS 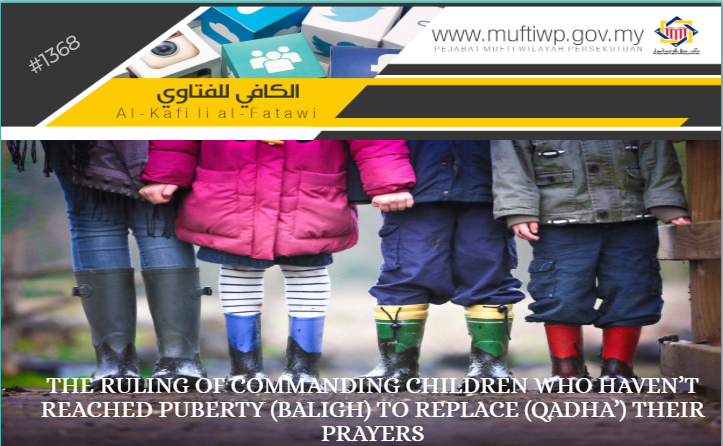 Assalamualaikum Dato’ Seri Mufti. For your information, my child is already 8 years old and I am currently training him to perform the complete five daily prayers.

However, it is very hard for him to get up for Subh prayer. My question is, can I ask him to replace (qadha’) the prayers that he missed because he was sleeping?

Hope for an explanation from Dato’ Mufti. Thank you.

Verily, Allah SWT already set specific times to perform the five obligatory daily prayers. Islam emphasizes the importance of performing these prayers according to their time. Allah SWT state in His saying:

Ibnu Mas’ud RA in commenting on this verse stated that each prayer has its own specified time like the performance of hajj in its specified time. (Refer: Tafsir Ibn Kathir, 4: 258)

Allah SWT commanded the leader of a family to ensure that everyone in his guardianship such as his wife and children to perform the prayers as well as being committed and have patience in doing so. Allah SWT state in the Quran:

“And enjoin prayer upon your family [and people] and be steadfast therein.”

Imam al-Qurtubi upon commenting on this verse stated that this is a command towards the Prophet Muhammad PBUH as well as his followers to have patience in performing the prayers and also to enjoin their families to do so. After this verse is revealed, Rasullullah PBUH went to the house of Saiyidatina Fatimah each Subh to wake them up for prayer. (Refer Tafsir al-Qurtubiy, 14: 164)

Besides, Rasulullah PBUH also command the parents to educate their kids to perform prayers. The PBUH taught them to teach and instruct their kids to pray when they reach seven years old and to hit them with non-injuring hits (just as a lesson) when they reach 10 years old. This is as stated in the hadith narrated by Abu Daud, where the Prophet PBUH said:

Hence, it is an obligation upon each parent to train their kids in performing all five daily prayers including Subh which has its own benefits. In a hadith narrated by Abu Hurairah RA, this situation is stated:

So, it is clear that commanding and waking up kids who haven’t reached puberty to perform prayers is one of the obligations and commandments towards parents, especially for Subh prayer because the Prophet PBUH highly emphasized on its importance and benefits behind it.

However, we would like to cite a fatwa from Syeikh Uthaimin when asked on this matter, where he states:

Apparently, this depends on the situation. For example, if it is really freezing outside or there are difficulties to wake up on particular mornings, then it is permissible to let young children sleep and do not wake him. However, if he wakes up, ask him to pray. Likewise, for the days where the weather is normal, and there will be no harm in waking them up, then wake him up, so that he will be used to perform prayers in congregation. (Refer al-Liqa’ a-Syahri, 40:18)

Then, it is understood that if there are difficulties for children who have not reached puberty below 10 years old like staying up late, cold weather, fatigue and so on, then it is permissible to not force them to pray Subh according to its time, so they will not be burdened by something which is not yet an obligated upon them and due to them being so young and weak.

Even so, in this situation, it is highly advisable to ask them to replace (qadha’) the prayer as well as giving necessary advice, so they will realize the importance and honor of prayers upon themselves. Allah SWT state in the Quran:

“That [is so]. And whoever honors the symbols of Allah - indeed, it is from the piety of hearts.”

Based on the above discussion, we would like to state that it is highly encouraged for the parents to command their children who has not yet reached puberty (baligh) to perform the prayers, especially for Subh, to train them to be familiar with that practice. Meanwhile, for the children above ten years old, it is advisable to hit them if they still refuse and being sluggish in performing the prayers.

Besides, among other methods to give reminders to them is by asking them to replace (qadha’) the missed prayers. This is to instill some consciousness in their heart on the importance and honor of prayers. So, it is highly encouraged for the parents to command their child who has not reached puberty to replace their missed prayers even if it is still not yet an obligation upon them. Also, it is wise for the parents to give encouragement like giving gift and praise when their child has successfully performed and be used to prayers, not only give command and punishments.

May Allah SWT give us the correct understanding in the religion as well as taufiq and hidayah to practice the Shari’ah accordingly. Ameen.