AL-KAFI #1370: THE RULING OF NON-MAHRAMS STAYING OVERNIGHT TOGETHER 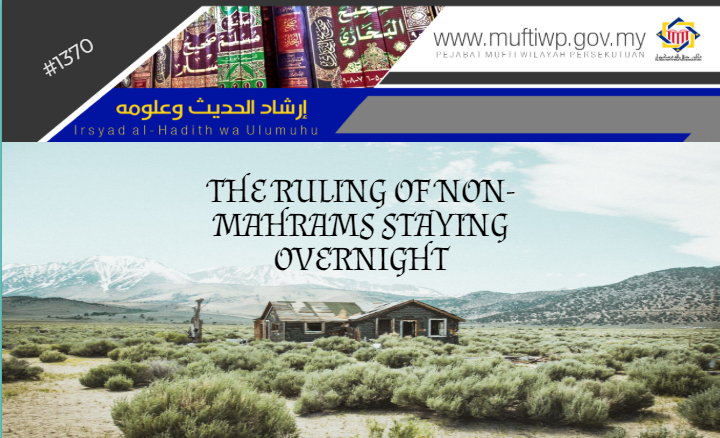 Assalamualaikum Dato’ Seri Mufti. I have a best friend (female) who is not yet married. We are so close with each other that I have prepared a room for her in my house. My husband and I are both public servants who frequently come home late. So, she will take care of my kids during our absence.

My question is, when I’m not around the house, is my husband and my friend considered as cohabitating? What should I do to ask my friend not to stay overnight in my house too frequently?

Hope for an explanation from Tuan Mufti. Thank you.

Islam puts a limitation in association between non-mahram of opposite genders. This is in accordance with the saying of Allah SWT in Surah al-Nur, verse number 30-31:

Among the limitation that should be preserved is the prohibition of being in solitude (khalwat) between two non-mahrams of different gender without the presence of other mahrams for those two persons. In a hadith narrated by Ibnu ‘Abbas RA, the Prophet PBUH said:

Imam al-Nawawi upon commenting on this hadith stated that when a man and a woman is in seclusion with one another without the presence of a third person, then this action is haram (prohibited) according to scholarly consensus (ijma’). (Refer: al-Minhaj Syarh Sahih al-Muslim Lin Nawawi, 9:109)

The same is stated in another hadith, where the Prophet PBUH said:

“Behold! A man is not alone with a woman but the third of them is Ash-Shaitan.”

Thus, when two non-mahrams of different genders is in seclusion without being accompanied by a third person is haram and considered as khalwat.

The same is stated in the interpretation of khalwat according to Act 559, Part IV, Offences Relating to Decency, Section 27 (Khalwat) where it states: Any

in any secluded place or in a house or room under circumstances which may give rise to suspicion that they were engaged in immoral acts shall be guilty of an offence and shall be on conviction and is liable to a fine not exceeding three thousand ringgit or to imprisonment for a term not exceeding two years or to both.

Referring back to the question asked, the issue is close to the issue of an ex-husband stays together with his ex-wife during ‘iddah period. This is because marriage relationship after talaq is considered the same as the ruling of ajnabi and non-mahram women who are prohibited for her awrah to be seen and it is also prohibited to have any skin contact.

In this issue, according to the opinion of mazhab al-Syafi’e, an ex-husband cannot cohabitate with his divorced wife during the ‘iddah period in the same house, except if the possibilities (ihtimal) of khalwat are lifted through:

This is in accordance with what is stated in kitab al-Mu’tamad fi Fiqh al-Syafi’e:

If there is a mahram for the wife in the house whether it is a man or a woman, or mahram for the husband even if it is his other wife, or if there is an ajnabi woman altogether with them, then, it is permissible for the husband to enter and stay there (in the house of the wife during ‘iddah) because the prohibition is negated, but it is followed by the ruling of makruh because it is feared that the awrah would be seen. Likewise, it is permissible if there is a barrier in the house that will segregate these two, or house with multiple levels. (Refer: al-Mu’tamad fi Fiqh al-Syafie, 4:268)

Hence, for the situation mentioned above, if a third person is present like mahram for the man or woman or another ajnabi woman, likewise, or if the house has barriers like rooms or levels (first, second and so on) until the possibility of being secluded is negated, then it is not considered as khalwat in that situation.

However, it is permitted by the conditions of both parties preserving the limitations and boundaries of awrah and communication between them. Thus, it is permitted but is makruh because it is feared that awrah would be seen. If one is able to avoid it, then, he should do so the best he can to avoid it.

According to the discussion above, we would like to state that the situation is not considered as khalwat or cohabitation because there is a barrier which is the room. However, it is best to avoid this from happening in order to not raise any suspicion and fitnah because there will be legal repercussions if there is a report made.

Hence, if the wife is absent and only the husband is in the house, it is better for your friend to not be in the same house, just the two of them because it may raise suspicion and fitnah. Try to give advice to your friend by explaining in detail for her to not stay overnight when you are not around. However, if you are present, or if there is another woman as mentioned above, then, it is permissible, but it is makruh and is better to be avoided.

May Allah SWT give us a better understanding as well as taufiq and hidayah to practice His shari’ah accordingly. Ameen.