AL-KAFI #1382: THE TIME WHEN TRADE IS PROHIBITED ON FRIDAYS 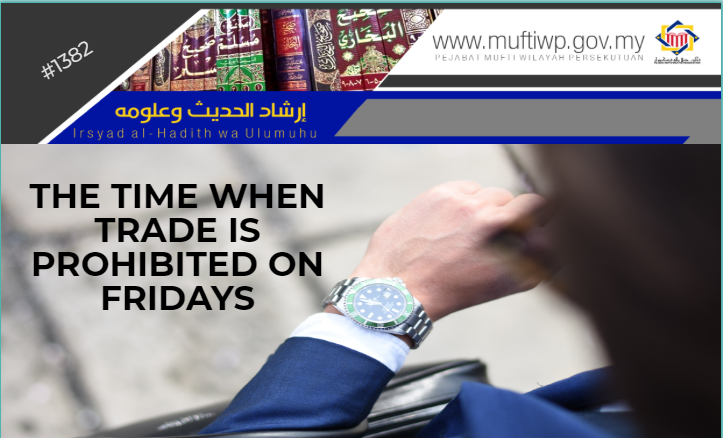 Assalamualaikum SS Dato’ Seri Mufti. When is trade prohibited; is it after the first or second adhan or when the Friday sermons start?

Allah SWT state in the Quran:

“O you who have believed, when [the adhan] is called for the prayer on the day of Jumu'ah [Friday], then proceed to the remembrance of Allah and leave trade. That is better for you, if you only knew.”

Imam Ibn Kathir upon commenting on the verse إِذَا نُودِيَ لِلصَّلَاةِ (when [the adhan] is called for the prayer), stated: “What is meant by al-nida’ (adhan) is the second adhan as practiced during the time of the Prophet PBUH, where he went out and sit on the mimbar. This is because, during that time, adhan is called in front of him. Hence, this adhan is what is meant here. However, the first adhan is first initiated by Amir al-Mukminin Uthman ibn Affan RA due to the large expansion of numbers of Muslim” (Refer: Tafsir al-Quran al-'Azim, 4/316)

Next, Allah SWT state: وَذَرُوا الْبَيْعَ (and leave trade), Ibn Kathir stated: “It means to hasten towards the remembrance of Allah SWT and leave trade when one is called to perform the prayer. Hence, the scholars agreed that trade is prohibited after the second adhan. On the other hand, they differ in term of whether the trades during the second adhan is called is valid (sah) or not. For this, they are divided into two opinions. Literally, the verse clearly states that trades during that particular time is invalid as what is highlighted on its specific discussion. Wallahua’lam”. (Refer: Tafsir al-Quran al-'Azim, 4/316)

So, it is understood that the prohibition of trade happens after the second adhan is called. During the time of the Prophet PBUH, Friday adhan is called only once, which is when the khatib took his position at the minbar to start the Friday sermon. The first adhan is initiated during Umar RA’s time due to the increasing numbers of Muslim. Al-Saib bin Yazid RA said that:

“In the lifetime of the Prophet, Abu Bakr and `Umar, the Adhan for the Jumua prayer used to be pronounced when the Imam sat on the pulpit. But during the Caliphate of `Uthman when the Muslims increased in number, a third Adhan at Az-Zaura' was added. Abu `Abdullah said, "Az-Zaura' is a place in the market of Medina”

Al-Hafiz Ibn Hajar said: According to the narration of Waki’ from Ibn Abi Dzi’b, Uthman commanded for the first adhan to be called. The same is stated in the narration of Imam Syafi’e from the same sanad. There is no contradiction between those two, because the additional phrase is said as al-thalith (the third), and the phrase for muqaddimah (introduction) of the adhan and iqamah is said as (azan) awwal. (Refer: Fath al-Bari, 3/318).

In the book of al-Ibda’, it is stated: “During the time of Uthman ibn Affan, the need arises as the numbers of Muslim expanded as well as the non-existence of the culture of hastening to go to masjid (mosques) in previous times. Then, Uthman commanded to call for the adhan (first one) to (remind) them for Jumu’ah prayer in al-Zaura” (Refer: al-Ibda’, 1/64)‎.

Imam Ibn Kathir stated after citing the above hadith: “It means here that adhan was called in a house said as al-Zaura’, and it is the tallest house in Medina which is near the masjid (mosque)”. (Refer: Tafsir al-Quran al-‘Azim, 8/122)

Ibn Qudamah said: “Adhan during the time of the Prophet PBUH is called after the imam sits on the minbar. Hence, the related ruling is towards the second adhan, and it is the same either the adhan is called before or after zawal (where the sun has passed its zenith)”. (Refer: al-Mughni, 2/145)

Here we cite some opinions of the scholars regarding this issue:

Imam al-Tahawi said: The adhan meant here is when the imam takes his place at the minbar. Originally, this is done during the time of the Prophet PBUH (Refer: Mukhtasar al-Tahawi, pg. 24)

Based on what is mentioned, it is understood that the ruling of trade after the second adhan is haram according to the agreement of the four madhabs.

We have already stated the decision of the Islamic Legal Consultative Committee of Federal Territories on the issue of trading in the mosque’s compound during Fridays. We would like to highlight here that when the second adhan is called, then it is impermissible to do any trade because it contradicts the valid Shari’ah evidences.

We would like to advise the buyers and sellers to avoid eating, drinking or trading in the compound of mosques during the second adhan. Whereas, for the first adhan, we are supposed to already be in the mosque to perform prayer and listening to Friday sermon with a peaceful heart as well as to get the chance of being at the front saff.

May this explanation make us obey the Shari’ah of Allah. Ameen.