AL-KAFI #1391: DOES THROWING UP INVALIDATE ABLUTION? 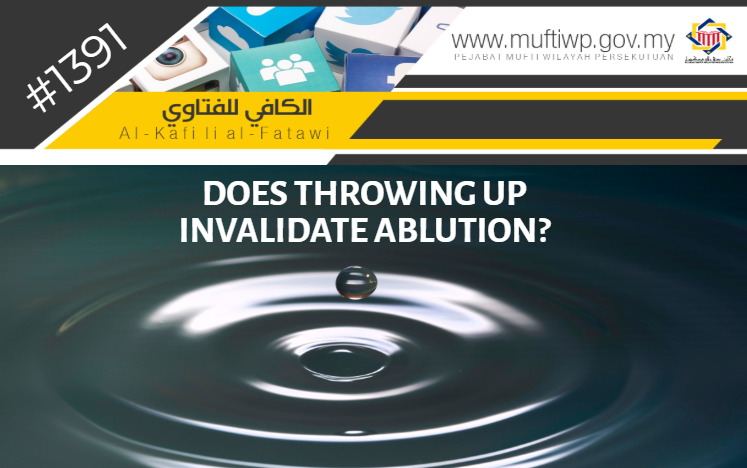 Does throwing up invalidate ablution? I once heard there is a hadith that instruct us to perform ablution after throwing up.

There is a narration from Aisyah R.Anha, where the Prophet PBUH said:

“Whoever vomits, bleeds through the nose, or released Madhi (urethral discharge) should go, perform ablution,”

The same is stated in a narration from Abu Darda’ RA:

"Allah's Messenger vomited [so he broke fast] so he performed Wudu." So, I met Thawban in a Masjid in Damascus, and I mentioned that to him. He said: 'He told the truth; I poured the water for his Wudu."

However, according to Syeikh Ahmad Syakir in his commentary on the book al-Raudhah al-Nadiyyah: The hadiths narrated in the issue of the invalidation of ablution due to a person throwing up are all weak and could not be used as an argument. (Refer Al-Raudhah al-Nadiyyah 1/174)

According to Syeikh al-Islam Ibnu Taimiyyah, ablution after throwing up is sunnah for there is a narration from the Prophet PBUH and the companions who did as such. As for those who state that it is an obligation, then there is no evidence from the Quran and al-Sunnah regarding it. (Refer Majmu’ al-Fatawa 21/242). He further added, only from the actions of the Prophet PBUH is not enough to state it obligation. (Refer Majmu’ al-Fatawa 25/222)

To conclude, we would like to state that throwing up does not invalidate ablution, as stated in madhab Syafi’e and other scholars. However, it is sunnah for those who have vomited to perform the ablution again as stated by Syeikh al-Islam Ibnu Taimiyyah according to the companions of the Prophet PBUH.

As for the hadith referred to obligate ablution for those who vomited, this is explained by Syeikh Ahmad Syakir that all of them are not authentic hadith, then it returns to its original ruling where the ablution is not invalid until an authentic and clear evidence state otherwise.