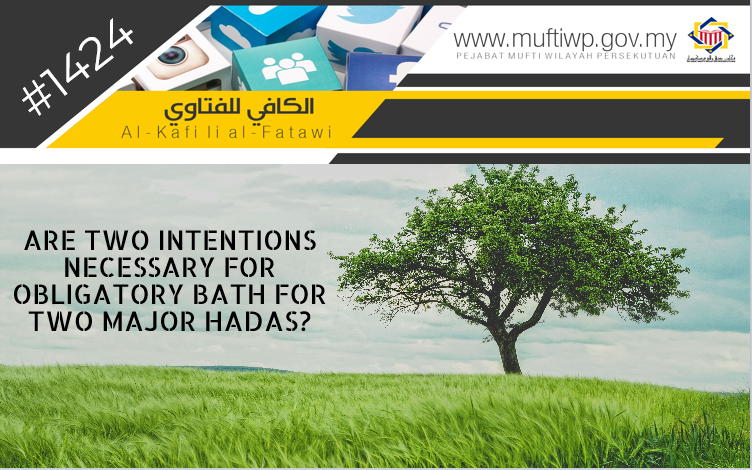 Assalamualaikum SS Datuk Mufti. After I had intercourse with my husband during the night, the next morning for Subuh prayer I found out that I’m menstruating.

Allah SWT sanctioned obligatory bath when someone experienced major hadas before performing several worships such as prayer, tawaf, touching mushaf al-Quran, iktikaf in mosques and others as stated in the Quran:

The same is said in the statement of Allah SWT:

“And if you are in a state of janabah, then purify yourselves.”

Scholars have set several matters that would require someone to perform the obligatory bath before he performs worship. These matters are specified in the book al-Taqrirat al-Sadidah fi al-Masail al-Mufidah:

Furthermore, scholars said that there are three obligatory conditions of obligatory bath and they are:

Regarding the discussion on intention, the intention should be set during the first wash of the body. As for the number of intentions for various reasons of hadas, Syeikh Hasan al-Kaf explained in his book, saying:

According to the above discussion, we would like to conclude that it is sufficient to set one intention for obligatory bath when there are two or more reasons for the obligatory bath. Thus, it is not necessary for us to set two intentions for obligatory bath for two major hadas such as intercourse and menstruation. May Allah SWT give us understanding and guide us in practising His commandments the best we could. Amin.