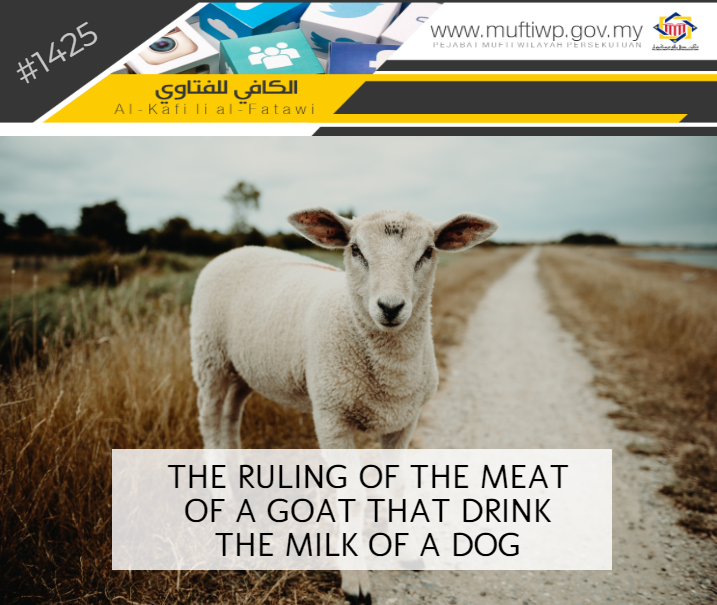 If a person found out that a goat feeds from a dog (drink a dog’s milk), what is the ruling of eating the meat of the goat?

“O mankind, eat from whatever is on earth [that is] lawful and good,”

The above verse shows that the food that we eat must fulfil two criteria; halal and good.

Syeikh al-Sa’di when commenting on the above verse said that the verse is meant for all of mankind, whether they are believers or disbelievers, to eat anything on this earth, from grains, fruits and animals that is made halal (lawful) for them (to eat or benefit from) to take, not by force or stealing or through prohibited trade or other prohibited means. While toyyiban means it is not from anything that is filthy (dirty or disgusting) such as carcass, blood, swine and others. This verse is an evidence that the original ruling of something (to be eaten or benefit from) is permissible. (See Tafsir as-Sa’di, 1/80)

Choosing to eat halal and good food is among the factors that a person’s supplication is granted by Allah SWT. This is as stated by the Prophet PBUH:

“A man who, having journeyed far, is dishevelled and dusty, and who spreads out his hands to the sky saying “O Lord! O Lord!” while his food is haram (unlawful), his drink is haram, his clothing is haram, and he has been nourished with haram, so how can [his supplication] be answered?”

Coming back to the question asked, we found that it is related to the ruling of eating al-Jallalah animals.

Al-Jallalah animals are animals of which they are fed with najis even if it is not the excrements such as a goat which grew by drinking the milk of a dog or a donkey. See al-Mausu'ah al-Fiqhiyyah al-Kuwaitiyyah (15/260)

Some scholars hold the opinion that these animals are categorized as al-Jallalah if the majority of their feed is najis, however, if the majority of their feed is clean and not najis, then they are not categorized as al-Jallalah. While other scholars do not set the condition of the amount of the feed whether it is a small amount or a lot, but the presence of najis smell (smelly) or the color, taste and smell of the meat is changed. This is the opinion of Imam al-Nawawi. See Tuhfah al-Ahwazi (5/447), al-Mu’tamad fi al-Fiqh al-Syafie (2/558), Mughni al-Muhtaj (6/155), Fathu al-Wahhab (2/237 dan al-Majmu’ Syarh al-Muhazzab (9/28)

Thus, it can be understood that animals that feed on filth but its meat’s structure such as smell, taste and color did not change is not categorized as al-Jallalah.

The Ruling of Eating al-Jallalah

Imam al-Tirmizi and Imam Abu Daud brought a narration from Ibnu Umar RA in their Sunan books regarding al-Jallalah:

“The Messenger of Allah (ﷺ) prohibited eating the animal which feeds on filth and drinking its milk.”

There is another narration with the following wording:

“The Messenger of Allah (ﷺ) forbade riding the camel which feeds on filth and drinking its milk.”

These hadiths if considered literally showed the prohibition of the Prophet PBUH from eating, riding and drinking the milk of al-Jallalah animal.

However, scholars have differing opinions regarding the meaning of the prohibition, whether it is haram or makruh tanzih.

In this issue, madhhab Syafie is divided into two opinions:

First opinion, it is haram for us to eat its meat and drink its milk for they are considered as najis. This is the opinion of Abu Ishak al-Marwazi, al-Qaffal, Imam al-Ghazali dan al-Baghawi.

The second opinion, the ruling of eating the meat or drinking the milk of al-Jallalah animals is makruh tanzih. This is the opinion of Imam al-Nawawi, majority of scholars in Iraq, agreed by al-Ruyani and other scholars (of whom are final). Imam al-Rafie state that this opinion is agreed by numerous scholars.

After analysing the above opinions of scholars, in our opinion, a goat that drinks the milk of a dog is categorized as al-Jallalah and the ruling of eating its meat and drinking its milk is makruh. This is supported with the statement of Imam al-Nawawi:

“A kid (baby goat) that grew up feeding from the milk of a dog is categorized as al-Jallalah. There are two different opinions regarding it. However, the strong opinion state that it is halal to eat its meat (makruh).” See al-Majmu’ Syarh al-Muhazzab (9/29)

As a precautionary step and to avoid the khilaf (different opinions of scholars), in our opinion the animal should be quarantined and isolated, and fed with good feed until the smell of the najis is gone. Generally, the ‘illah (reason) of the impermissibility of eating al-Jallalah animals is because it is fed with najis and filth which will, in turn, affect itself. Thus, if the ‘illah is removed by isolating, quarantine or others, then the prohibition of eating the animal would also be abrogated.

For example, this has been done by Ibnu Umar RA who quarantined al-Jallalah chicken for three days. See Musannaf Ibn Abi Syaibah (24608)

This is in line with the Islamic legal maxim:

“When the ‘illah is gone, then so does its ruling.”

Furthermore, you can also refer to the article that we have previously published regarding the issue of al-Jallalah in the article al-Kafi li al-Fatawi Series 456: The Ruling of Eating Catfish and Silver Catfish Fed with Swine meat.

May Allah SWT give us the correct understanding in religion. Amin.