AL-KAFI #1428: BETWEEN THE PROVISIONS OF ONE’S WIFE AND PARENTS: WHICH ONE SHOULD BE PRIORITIZED? 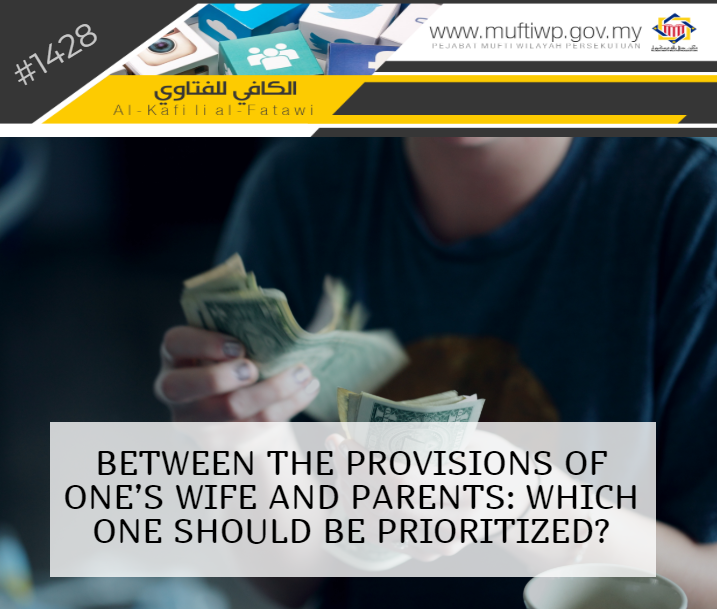 Assalamualaikum SS Datuk Seri Mufti. Between the provisions of a wife and parents, which one should be prioritized?

We would start with a hadith narrated by Jabir RA, the Prophet PBUH said:

The meaning from the hadith showed that ‘فَلِأَهْلِكَ’ indicates one’s wife and children. Thus, as long as they are under his responsibility, then his responsibility to his wife is prioritized except in exigent situations when his mother is in need, then it is given to her.

Whereas in a hadith narrated from Abu Hurairah RA, the Prophet PBUH said:

Syeikh Syams al-Haq al-Azim Abadi cited that al-Khattabi said: The order if you analyse it you would find that the Prophet PBUH prioritizes the main and closest family relations. (See Aun al-Ma’bud, 5/76)

This hadith clearly shows the responsibility towards his wife is prioritized after himself.

Scholars state, giving provisions to one’s parents is not an obligation on a child except in two conditions:

In al-Fiqh al-Manhaji it is stated: If the number of usul, furu’ and others that need nafaqah (provisions) are a lot, while the excess property of himself is not sufficient for all of them, then he should fulfil his needs by prioritizing them according to the following order:

According to the above discussion and evidences, in our opinion the provision of one’s wife is prioritized except in situations where his parents are financially incapable to provide for themselves their basic needs such as medication, treatment, food and drink. In this situation, he should prioritize them so that they can continue on with their daily lives.

In issues such as this, there should be understanding and tolerance by all of the children to take care of their parents together, caring, helping and offering their service for their parents. By doing this, it will not burden only a single child while the other children neglect their parents. Remember what has been advised by the Prophet PBUH:

Subsequently, caring and helping our own parents should not be considered as a burden but an ihsan that is wajib for us to fulfil the right of our parents. This is in accordance with the statement of Allah SWT:

“And your Lord has decreed that you not worship except Him, and to parents, good treatment. Whether one or both of them reach old age [while] with you, say not to them [so much as], "uff," and do not repel them but speak to them a noble word.”

Let us all supplicate to Allah SWT, hopefully, all of us will be among His slaves who are pious and obey their parents. Amin.