AL-KAFI #1433: THE RULING OF FULFILLING DIFFERENT NAZAR FOR THE SAME MATTER 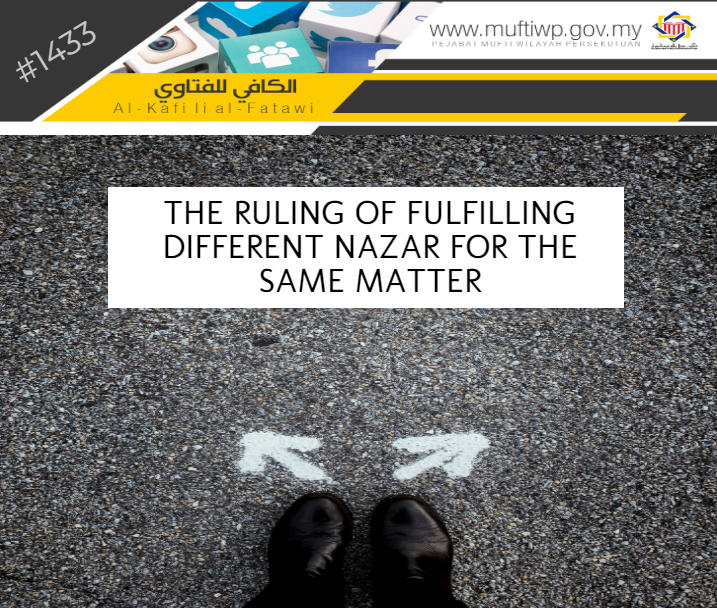 Assalamualaikum SS Datuk Mufti. 8 years ago, my wife made a nazar that if she becomes pregnant then she would organize a feast to show her gratefulness. Last year, she made another nazar if she is blessed with a child, then she would bring her child to perform umrah. Alhamdulillah, this year she is pregnant and would give birth in December after 11 years of trying to conceive.

My question is, is it obligatory for my wife to fulfil both her nazar or only her recent nazar? Hope for an explanation from Mufti. Thank you.

The term nazar is stated by scholars as:

Obligating oneself of a qurbah act (action to get closer to Allah) which is not set by syarak, whether in an absolute or ta’liq (conditioned/relational) manner with a certain matter. (Refer al-Mu’tamad fi al-Fiqh al-Syafie, 2:501)

Allah SWT commanded the Muslim ummah to fulfil the nazar uttered as stated in the statement of Allah SWT in the Quran:

Then let them end their untidiness and fulfil their vows and perform Tawaf around the ancient House."

The same applies if a person makes a nazar to perform worship towards Allah SWT, then it is obligatory for him to fulfil it. However, if he makes a nazar to commit disobedience, then he is prohibited from fulfilling it. The Messenger PBUH said in a hadith:

Coming back to the above-asked question, the nazar made by the wife of the questioner is a form of obedience to Allah SWT. Thus, when a person states that if she gives birth to a child and makes two nazar to perform acts of obedience of organizing a feast and bringing the child to umrah, then it is obligatory for her to fulfil all of the nazar that she stated.

However, if she is she is unable to fulfil her nazar after trying her best to do so, then she has to pay the kaffarah for her nazar. Allah SWT states:

“Allah will not impose blame upon you for what is meaningless in your oaths, but He will impose blame upon you for [breaking] what you intended of oaths. So, its expiation is the feeding of ten needy people from the average of that which you feed your [own] families or clothing them or the freeing of a slave. But whoever cannot find [or afford it] - then a fast of three days [is required]. That is the expiation for oaths when you have sworn. But guard your oaths. Thus, does Allah make clear to you His verses that you may be grateful.”

Thus, for a person who is unable to fulfil his nazar, he has to pay the kaffarah by choosing to feed or clothe ten poor people or free a slave (if he has a slave). Kaffarah payment can be made to religious bodies of authorities such as State Islamic Religious Council. If a person is unable to pay the three kaffarah stated, then he has to fast for three days in accordance with the above statement of Allah SWT.

Furthermore, we would like to take this opportunity to advise against making nazar that would only burden us later. The reason is, the Prophet PBUH said:

“Do not take vows, for a vow has no effect against Fate; it is only from the miserly that something is extracted.”

According to the above discussion, we would like to conclude that various nazar made for a single matter should all be fulfilled if they are acts of worship towards Allah SWT. This is based on the above stated general evidence.

However, the nazar can be fulfilled at the appropriate time. The reason is a nazar is the right and debt to Allah SWT until the person who made it fulfils it. Indeed, fulfilling the right and promise is an obligation that a person will hold accountable for in the hereafter. Allah SWT states:

“And fulfil [every] commitment. Indeed, the commitment is ever [that about which one will be] questioned.”

May Allah SWT grant us understanding and bless us with guidance in practising His commandments the best we could. Amin.