AL-KAFI #1491: THE RULING OF COMMITTING SUICIDE BY PURPOSELY VIOLATING THE TRAFFIC RULES 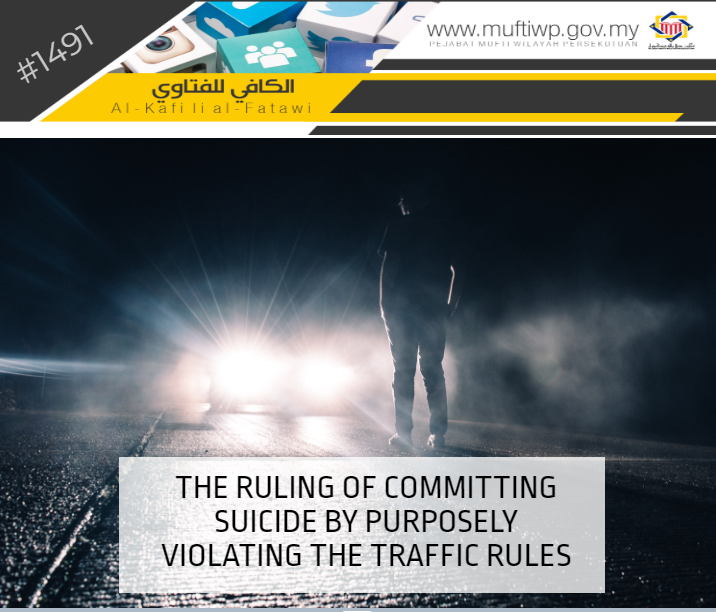 Assalamualaikum wbt. Is it considered as suicide if a person purposely violates the traffic rules and it led to death in an accident?

Basically, the traffic rules implemented is in accordance with maqasid syar’iyyah, specifically in protecting life (hifz al-nafs) and property (hifz al-mal). The enforcement of traffic law is to ensure the safety of road users. Thus, the ruling of complying the traffic rules is wajib. This is related to the obligation to obey a ruler or government by complying with the laws and rules set by the authorities is wajib as long as it does not contradict the Quran and sunnah.

“O you who have believed, obey Allah and obey the Messenger and those in authority among you.”

Thus, a person is considered as sinful if he drives recklessly that it would harm himself or others in public. We have explained in detail about this matter in our previous article Bayan Linnas Series 180: Fiqh of Road Rules in Conjunction with Eid http://bit.ly/38WzzEi

The Crime of Suicide is Haram

“And do not kill the soul which Allah has forbidden, except by right.”

It is clearly stated in surah al-Israa’ that generally, killing without a reason permitted by syara’ is haram and this includes suicide. Furthermore, we are warned against committing suicide with horrible punishment of it in the hereafter.

In a hadith narrated by Abu Hurairah RA, the Prophet PBUH said:

Imam al-Nawawi said that a person who committed suicide with something, then he will be punished the same way he committed suicide in hellfire and he will never enter paradise unless he is a Muslim. (Refer al-Minhaj 2/118)

There are three divisions of suicide in terms of the intentions of the person who commits suicide:

The majority of the jurists (Hanafiyah, Syafie’yah, Hanabilah) hold the opinion that it is not considered as murder if the murderer did not have the intention to kill or use a weapon that could kill. The reason is intention is something that is not visible, thus, it is determined through qarinah which is apparent, for example, looking at the instrument or method used as miqyas to his intention. It is known that a killer will use a suitable instrument to kill for example a knife. Thus, if the instrument or method used is not what is usual to kill such as hitting or using a small rock, but it leads to death, then the murder is considered as a murder that is close to intentional. (Refer al-Fiqh al-Islami wa Adillatuh 7/5658)

To conclude, to differentiate whether it is intentional, close to intentional or unintentional killing is according to the intention of the person when committing the act, then the type of instrument and method used that lead to death is considered.

Coming back to the question, we surmise the following matters:

“An action is considered in accordance with the intention.”

Thus, as a Muslim, we should always be careful and never put ourselves or the person around us in harm’s way. Allah SWT states:

“…and do not throw [yourselves] with your [own] hands into destruction [by refraining].”

May Allah SWT always grant us goodness in our daily lives. Wallahua’lam.