AL-KAFI #1496: THE RULING OF TOUCHING THE KA’ABA WHILE PERFORMING TAWAF FOR UMRAH 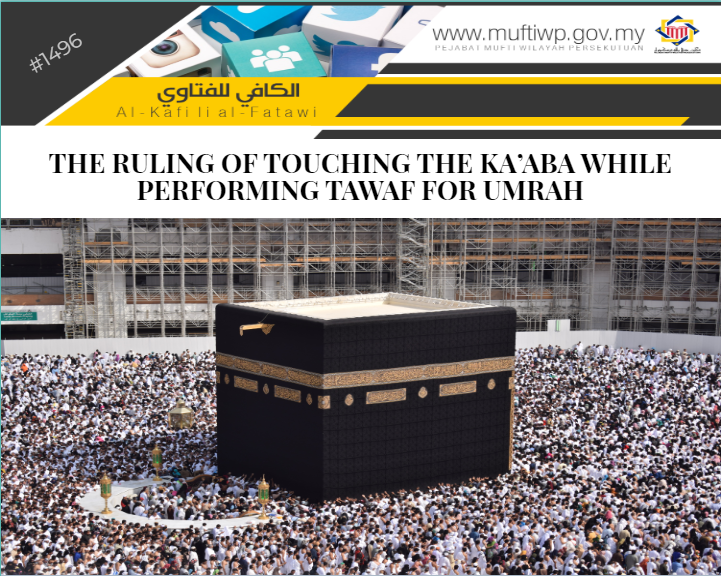 Assalamualaikum. I have one question. While I perform tawaf for umrah, I was near the ka’aba. Am I allowed to touch its wall during tawaf?

Tawaf is one of the requisites for hajj and umrah. There are several types of tawaf like ifadhah tawaf, umrah tawaf, wida’ tawaf, and etc.

According to syarak, tawaf is circumambulation around al-bait al-haram. Tawaf is done by going in circle around Ka’aba for seven rounds by following the rukn (requisites) and wajib (obligations) of it. This is based on the saying of Allah SWT:

“…and perform Tawaf around the ancient House,”

The Requisites of Tawaf

It is summarised from the statement of Syeikh Zain bin Ibrahim Sumait and Dr Muhammad al-Zuhaili in their books pertaining the requisites of tawaf which are:

Performing Tawaf Outside of the Ka’bah

This is in accordance with a hadith narrated by Aisha RAnha, where the Prophet PBUH said:

When performing tawaf, one should make sure that all parts of his body is outside of the Ka’abaa including Syazarwan and Hijr Ismail. This is because, both are parts of Ka’aba. This is as stated in al-Fiqh al-Manhaji: “It is a requisite to not include any parts of the body in Ka’aba territory. One should perform tawaf outside of Hijr Ismail, because it is part of Ka’ba. Hence, it is impermissible to perform tawaf inside it.”

Based on the question asked as well as the arguments presented, it can be concluded that touching Ka’ba while performing tawaf will invalidate the tawaf. This is because, by holding on to the Ka’aba, some parts of the body will be inside the Ka’aba territory.

May Allah SWT bless us with the correct understanding in His religion as well as taufiq and hidayah to practice the Shari’a our best.