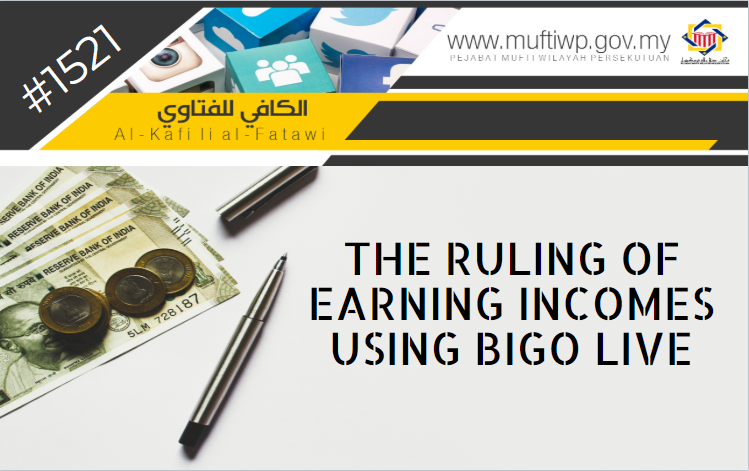 Assalamalaikum ustaz. I would like to ask. What is the ruling of using the application of BIGO Live to earn incomes? The application functions through live streaming with men and women while doing some actions which can entertain others like dancing and etc. in order to attract more followers. Will the money earned be blessed?

BIGO Live is an application built using the technology of artificial intelligence (AI) centred in Singapore starting from the year 2014. Among the product produced by this company includes Bigo Live, Likee and Imo. There are around 300 million active users in more than 150 countries who use the application made by the company. [1]

Based on the above question, we start with an Islamic legal maxim stated by Imam Suyuti in his book:

Referring to the above maxim, the original ruling of something is permissible. Unless there is a dalil or something which leads to haram so it is haram.

The same for one’s deed or action; it depends on one’s intention and purpose. If its intention is good, then the action is considered good. This is as the hadith narrated by Saidina Umar al-Khattab where the Prophet PBUH said:

(The value of) an action depends on the intention behind it. A man will be rewarded only for what he intended.

Imam al-Nawawi in his commentary stated that the above hadith contains various lessons as stated by Imam al-Syafi’e and other jurists, in which they are of the opinion that this hadith is one third of the religion of Islam. Imam al-Syafi’e stated that there are around seventy discussions of the science of Fiqh in it.

Based on the above hadith, there are several Fiqh maxim related to it. Imam Taqiyuddin al-Subki cited in his book a maxim:

Matters are determined by intention

Therefore, one’s intention and purpose will shed the light on the ruling of shari’a whether they are halal or haram. If an action is in the purpose of good, so the action is halal.

Conversely, Allah SWT forbid His servants from doing actions prohibited by shara’ as well as calling them closer to Him. Allah SWT says:

And do not approach immoralities - what is apparent of them and what is concealed.

Based on the question and the dalil presented, we are of the opinion that the usage of Bigo Live for the purpose of giving benefit and goodness towards religion and the society as well as intending to spread da’wah is highly encouraged. And one may take benefit from the income earned from it.

However, if the usage is for the purpose of committing sins as well as leading to actions prohibited by shara’, so we are of the opinion that the usage of and earning income from it is prohibited.

The saying of Allah SWT:

And if a person intends to use the application, he should make sure that:

It is best for a Muslim to not committing actions which are unbeneficial and purposeless. There is a hadith narrated by Abu Hurairah RA where the Prophet PBUH said:

“Part of a person’s goodness in Islam is his leaving alone that which does not concern him.”

May Allah SWT give us true understanding in His religion as well as taufiq and hidayah to practice His shari’a accordingly.