AL-KAFI #1528: IS IT PERMISSIBLE TO HAVE MINION OR TEDDY BEAR AS OUR PILLOW? 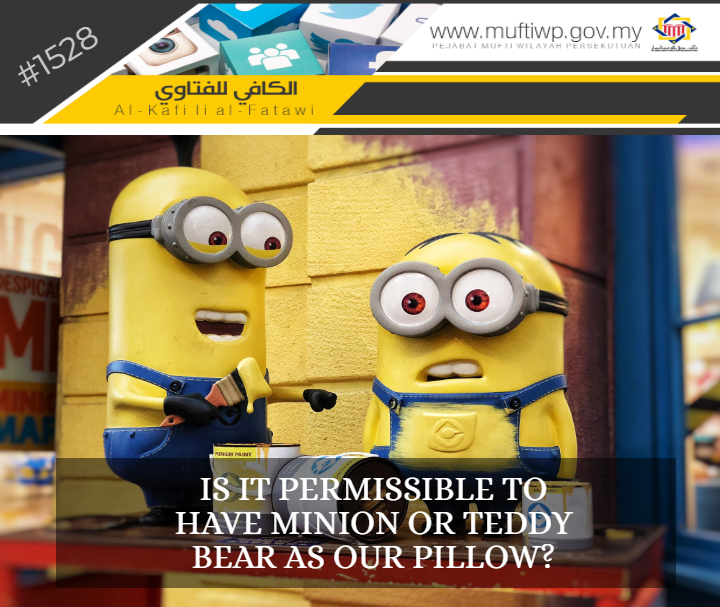 I’m sorry but I have a question, is it permissible to have minion or teddy bear as our pillow (to hug or hold onto) when we sleep? Hope for an explanation from Datuk Mufti.

We start with the statement of the Prophet PBUH:

"Angels (of Mercy) do not enter a house wherein there is a dog or a picture of a living creature (a human being or an animal).”

Al-Mubarakfuri explained that the meaning of the phrase “Angels do not enter” refers to the angel of mercy and not angels of hafazah (who is always with a person and records his deeds) and also not the angel of death (who takes lives). While the phrase “a picture” in the hadith means a picture (that is in the form of) humans and animals. (See Tuhfah al-Ahwazi, 8/72)

Imam al-Nawawi explained regarding the reason of the prohibition saying:

“The scholars stated, among the reasons angels are prevented from entering a house is because there is a picture (of a living creature). The reason is the act of placing the picture is a cursed transgression and it is as though resembling the creation of Allah and some of the pictures are worshipped.” (See al-Minhaj Syarh Sahih Muslim, 14/84)

Ibnu Qayyim al-Jauziah state that there is a narration where the Prophet PBUH entered the Kaaba and prayed inside of it but the Prophet PBUH refused to enter it until all the pictures are brought out from it. Afterwards, he commented on the narration saying:

“This is evidence that ruled it makruh (undesirable) to pray in a place where there are pictures in it. And this is a greater makruh compared to praying in washrooms for the makruh ruling is due to either the fear that there may be najis or it is the house of shaytan. This is the sahih opinion. As for a place where pictures are in it, (praying there is makruh) for there is a possibility that it could lead to syirk. Most previous nations are led to syirk whether by worshipping pictures or graves (of prophets and pious people).” (See Zad al-Ma’ad, 3/402)

Thus, we understand that the prohibition towards figurine or pictures (painting) of living creations is because they resemble the creation of Allah SWT and it is feared that they would be honoured, venerated or respected that ultimately it will to syirk where they are worshipped.

We have discussed the issue regarding statues, figurines, toys and others like them thoroughly in our previous articles:

It has become a trend where children nowadays would have a teddy bear, minions plushie or others as their bolster or pillow that they hug or hold when they sleep. Regarding this matter, Imam al-Nawawi cited the opinion of al-Khattabi who states:

“Indeed, the angels will not enter the house where there is dog or pictures (pictures of figures) which are prohibited. As for what is not prohibited to be utilized such as hunting dogs, or dogs that guard crops or farm animals and pictures that are not revered on throws or pillows or others like it, then they do not prevent angels from entering the house (inside the house) because of their presence (inside the house).” (See al-Minhaj Syarh Sahih Muslim, 14/84 and Tuhfah al-Ahwazi, 8/72)

However, afterwards Imam al-Nawawi states his opinion where he said the prohibition of the matter is general for all types of dogs and pictures:

“The strong opinion regarding the prohibition is a general prohibition for all types of dogs and picture of figurines… for the hadiths are absolute (not bound by anything). And for the narration of a puppy’s presence under the bed in the Prophet PBUH’s house, the Prophet PBUH did not know about it, thus, there is an excuse in this case. However, it still prevented the angel Gabriel from entering the Prophet PBUH’s house because of the puppy being inside of the house. If there is exception for pictures of figurines and dogs (being inside a person’s house), surely Gabriel AS would not have been prevented from entering the house.” (See al-Minhaj Syarh Sahih Muslim, 14/84)

Even so, there is a narration from Aisyah R.Anha where she said:

Ibnu Hajar al-Asqalani said: “Scholars have used this hadith as evidence about the permissibility of girls playing with dolls. This hadith is an exception for the general hadith that prohibit creating something that resembles the creation of Allah SWT. This permissibility is affirmed by al-Qafi ‘Iyadh and he states that this is the opinion of the majority of scholars.” See Fath al-Bari (10/527)

Thus, we know that if the toys or plushie is for play and education of children, then it is permissible. The reason is, children’s toys is not something that is revered or worshipped. Furthermore, it is in the nature of children to throw or break their toys or even disassembling the head and body parts of their toys. This clearly shows that toys are just their plaything and not something that is honoured or revered.

Coming back to the question asked, in our opinion it is permissible to have Teddy bear or Minion plushie as pillow as long as it is not revered, venerated (taqdis), respected or is used for the purpose of worship. Moreover, when it is used as a pillow it is clear that its purpose is not to be revered for it may be exposed to drool and others.

To conclude, after reviewing the evidences and opinions of scholars as well as considering the reality and waqi’ of Malaysia, we draw the following conclusions:

May Allah SWT give us a clear understanding in practising this religion. Amin.