AL-KAFI #1562: A FATHER WHO REFUSES TO COVER HIS CHILD’S TUITION FEES 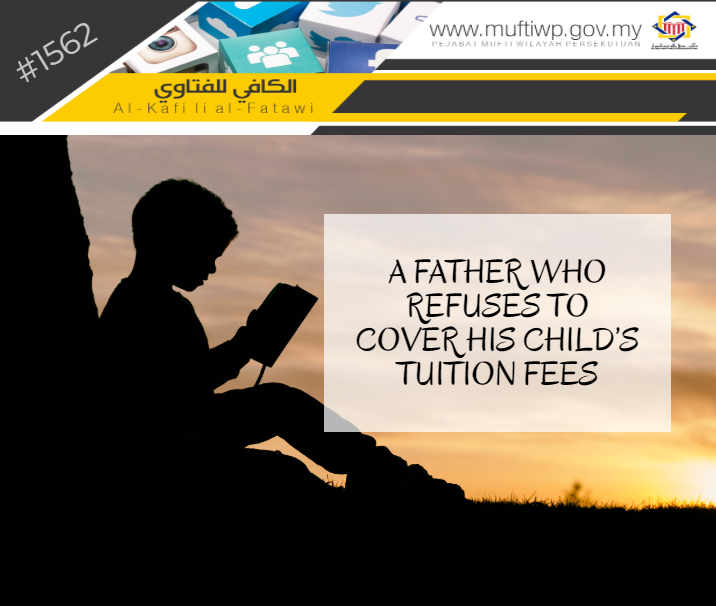 Assalamualaikum. What is the ruling for a father who refuses to pay for his son’s university tuition fees and asking his son to take out PTPTN loan (while the father is financially capable) stating that the father wants the son to learn about how hard it is to earn money so that the son would strive in his studies?

Basically, it is the obligation of a father to provide sustenance which includes, a home, clothing, food and drink, medical necessity and education according to the custom and within the capacity of the father’s income. Scholars set three obligatory conditions of a father, grandfather, mother and grandmother in providing for a child:

The condition for the provider (father, grandfather, grandmother) is capable/well-off, which means he has a surplus of property after his and his wife’s personal expenses has been deducted for a duration of a whole day and night or more. Thus, if he does not have extra provisions for himself and his wife, then it is not wajib for him to provide the nafkah and the responsibility switched to someone else.

“It is not permissible to give charity to a rich man (or one who is independent of means) or to one who is strong and healthy.”

If the child has reached puberty and is strong and healthy but is unable to work because he is busy learning, then the subject he is studying should be considered. If it related to his personal obligation such as the knowledge of aqidah and worship, then he is considered as incapable to work and it is wajib for the father to provide nafkah for the child. As for if the knowledge is fardu kifayah that is needed in a society such as medicine, engineering, architecture and others, then this does not mean that he is unable to work. Thus, the father can choose whether to provide for the child so that he can continue his studies and the father will be rewarded for it or stopped providing for his child. Refer al-Mu`amad fi al-Fiqh al-Syafie (4/288-289)

According to our custom, it is wajib for a father to provide for his child until the child reaches the age of 18 years old, however, the shariah court has the authority to issue an order according to the plea presented by the child or someone else against the father to continue the maintenance for the higher education of the child. Section 793 of the Islamic Family Law Act (Federal Territories) 1984 (Act 303) allocate the order for maintenance shall expire on the attainment by the child of the age of eighteen years, but the Court may, on application by the child or any other person, extend the order for maintenance to cover such further period as it thinks reasonable, to enable the child to pursue further or higher education or training.

According to the above facts and statements, originally it is not an obligation of the father to bear the costs of higher education for his child. A father is obligated to ensure that his child has the knowledge of fardu ain so that the child is able to fulfil the child’s fardu ain obligations. If he is incapable, then he must ensure his child is able to learn from another person or pay someone to teach his child. This includes education fees. This is the responsibility of the father until the child reaches puberty.

However, according to our custom, a father should provide maintenance for his child until the child reaches 18 years old. The reason is they are still considered as a child according to Section 2 (1) Child’s Act 2001 which states a child is a person under the age of eighteen years old. In Section 43 of the same Act state that it is a criminal offence for a child under the age of 18 years old to be hired and the person will be charged and punished if convicted in the court of law. This is important in protecting their rights to study.

In certain situations, a person who has reached the age of 18 years old may not be able to compete in the workforce and need to continue his studies up to higher education. Thus, the shariah court may at any time order the parents to cover the education fee to enable the child to pursue further or higher education or training, according to the application of the child.

In our opinion regarding the situation presented by the questioner, the child should discuss with his parents properly in a civil manner regarding the problem he is facing. It is not wrong for the father to ask his child to apply for permissible education funding according to syarak, but the final decision is made by the child. The reason is the child’s refusal to take out education loans does not make the child be considered as a disobedient child for the ruling of it is just permissible. Refer the discussion regarding disobedience towards one’s parents in Irsyad al-Fatwa Series 367: Parent’s Rights in Interfering with Their Child’s Marriage. To the father, remember that the best of gift that is greatly rewarded is the gift towards the people who are under his care. From Abu Hurairah RA, the Prophet PBUH said:

"The best charity is that which is practised by a wealthy person. And start giving first to your dependents."

Imam Ibn Hajar al-‘Asqalani commented on the above hadith saying: “Prioritize provisions for himself and his family for they depend on him compared to others.” Refer Fath al-Bari (3/296)

“The most excellent Sadaqa or the best of Sadaqa is that after giving which the (giver) remains rich and the upper hand is better than the lower hand, and begin from the members of your household.”

Imam al-Nawawi said: “The wisdom from the hadith is to start giving charity to the most important individual then the less important in the matters of shariah.” Refer al-Minhaj (7/125)

Whereas for the child, if he takes out a shariah-compliant loan, works hard and ultimately get excellent results, then he will be rewarded for following the advice of his parents (birr al-walidayn) and he does not have to repay it. This is a great motivation to be successful in one’s studies.

However, if there is still disagreement and a need, then the child can make an application to the shariah court as stated above. Wallahua’lam.