AL-KAFI #1575: PRONOUNCING NAMES OF DISEASES IN THE RECITATION OF QUNUT NAZILAH 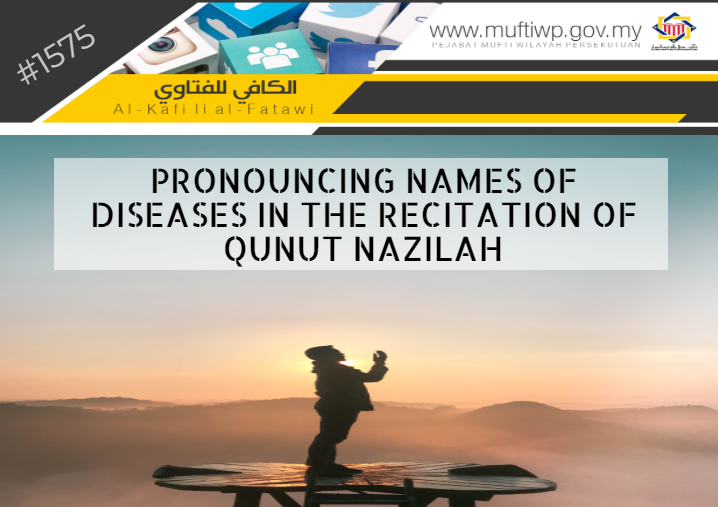 Assalamualaikum SS Mufti. If an imam pronounces one by one names of diseases such as the coronavirus during qunut nazilah in prayer, is it permissible? Or is it included under matters that invalidate prayer?

Muslims are commanded to practice qunut nazilah in prayer when there is certain mishap or calamity that befalls Muslims. It is even commanded when the rulers ordered it to be performed in prayers. This commandment is in accordance with several shariah texts and narrations, among them is as mentioned in a hadith narrated by Abu Hurairah RA where he said:

While the Prophet (ﷺ) was offering the `Isha' prayer, he said, "Allah hears him who sends his praises to Him," and then said before falling in prostration, "O Allah, save `Aiyash bin Rabi`a. O Allah, save Salama bin Hisham. O Allah, save Al-Walid bin Al-Wahd. O Allah, save the weak ones among the believers. O Allah, let Your punishment be severe on the tribe of Mudar. O Allah, inflict upon them years (of famine) like the years of Joseph."

Imam al-Khattabi in his commentary upon this hadith said: “Among the input of this hadith is affirming the permissibility of qunut recitation in prayers other than witir. This hadith also shows that making du’a for a nation by stating their names as well as their fathers’ will not invalidate prayer. The same for supplicating for the bad upon the kuffar and oppressors will not defect one’s prayer.” Refer Ma’alim al-Sunan, Al-Khattabi (1/288).

The same is also narrated in a hadith by Anas bin Malik RA where he said:

“That the Messenger of Allah (ﷺ) observed Qunut for one month Invoking curse upon Ri'l, Dhakwan, 'Usayya. those who disobeyed Allah and His Messenger (ﷺ).

Hence, the above hadiths clearly show the sanctioning of the recitation of qunut nazilah in prayers recited during I’tidal in the last rakaat of the prayer. Beside supplicating for the destruction upon the enemy of Islam who commit evildoings and threaten the Muslims, qunut nazilah is also commanded when there is a spread of disease or when a calamity befall the Muslims. Imam al-Nawawi said: “Qunut is sanctioned in every obligatory prayer due to nazilah (specific occurrence) and not (is recited) in an absolute manner (without reasons).” Refer Minhaj Al-Thalibin, Al-Nawawi (1/222).

While Imam ibn Hajar al-Haitami in commenting on the above words of Imam al-Nawawi said: “Whether nazilah (the specific occurrence) is general or specific related to the public in which its harm will inflict the Muslims like an outbreak and cholera, the same for heavy rain which is harmful.” Refer Tuhfah al-Muhtaj, Ibn Hajar al-Haitami (2/68).

Pertaining to the issue of matters that invalidate prayer, as mentioned by the fuqaha’, among them is speaking on purpose. However, we should be clear that the words which will invalidate prayers are words unrelated to the prayer itself. This is because, the prayer’s definition itself referred to words which consist of verses of the Quran, dhikr and du’a. Hence, it can be understood that as long as an utterance is related to the prayer, then it is not included under the invalidators of prayer.

In conclusion, we state that du’as recited by the imam during the recitation of qunut nazilah, regardless of whether the names of certain individuals or diseases or the oppressed Muslim countries are pronounced then all of these will not invalidate the prayer as it is included under du’as permitted in the prayer.

Lastly, we pray to Allah SWT to give us the correct understanding for us in religion. Ameen.