AL-KAFI #1584: IS IT PERMISSIBLE FOR A FEMALE IMAM TO RAISE HER VOICE DURING JAHAR PRAYERS? 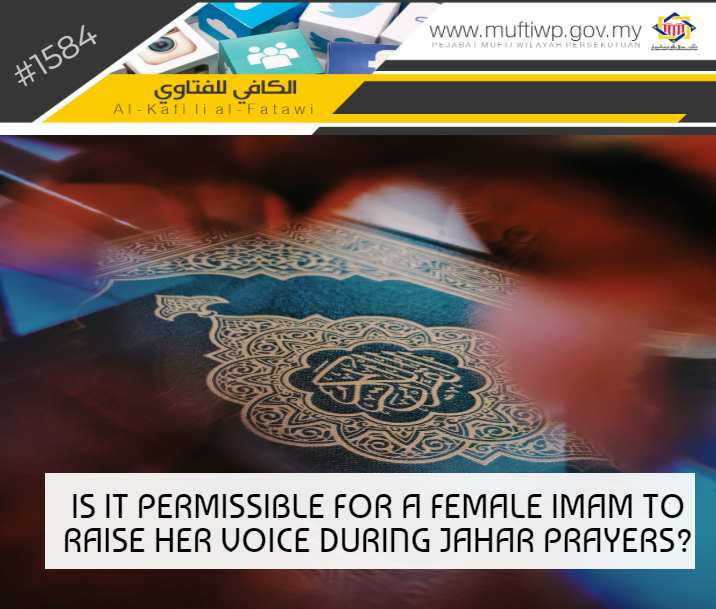 Assalamualaikum ustaz. Is it permissible for a woman to raise her voice during Maghrib, Isha’ or Subh prayer like the men? Especially when she is the imam for a congregation of women. Hope for an explanation from ustaz.

The volume of voices for the recitation of prayers are divided into two, which are:

Reciting recitation for prayer through loud or soft recitation depends on the time is one of the hai’at sunnah in prayer.

Among the places which are sunnah to recite with loud (jahar) recitation is Subh prayer, in the first two raka’ah of Maghrib and Isha’ prayer, Juma’ah prayer, two ‘Eid prayers, eclipse prayer, istisqa’, tarawih and witr prayer in the month of Ramadhan. This is sunnah either when one becomes an imam for a congregation or during one’s individual prayer.

While apart from those prayers, it is sunnah to recite in soft (sirr) recitation either when one becomes the imam for a congregation or individual prayer, for example, Zuhr and Asr prayers. [See: al-Fiqh al-Manhaji 1/149]

Hence, reciting recitations in jahriyyah prayer in a slightly raised voice is sunnah for every Muslim, whether male or female, in individual or congregational prayer (as the imam). However, when one becomes a ma’mum, he should recite his recitation softly and it is makruh for him to raise his voice.

While for a woman, most Shafi’ite scholars said – if she performs prayer alone, or together with other women congregation, or her mahram men, she should raise her voice in the recitation. However, if a woman performs prayer in the presence of ajnabi men, then she should lower her voice.

And what is meant by raising the voice for a woman is it can be heard by the ma’mum who perform the prayer together with her or those who pray behind her. [See: al-Mufassal fi Ahkam al-Mar’ah wa Bayt al-Muslim 1/255]

Thus, it is sunnah for a woman to raise her voice in jahriyyah prayers whether she performs it alone or with a women congregation. However, if there are non-Mahram man in the vicinity, she should recite it softly (sirr) whether when she becomes the imam, ma’mum or alone.

Still, it is permissible for a female imam to raise her voice during the prayer, but she must not exceed the volume of the men.

May Allah SWT give us sahih understanding in His religion as well as taufiq and hidayah for us to practice His shariah accordingly. Amin.