AL-KAFI #1612: THE RULING OF USING CADAVER DOGS TO SEARCH FOR MISSING BODIES 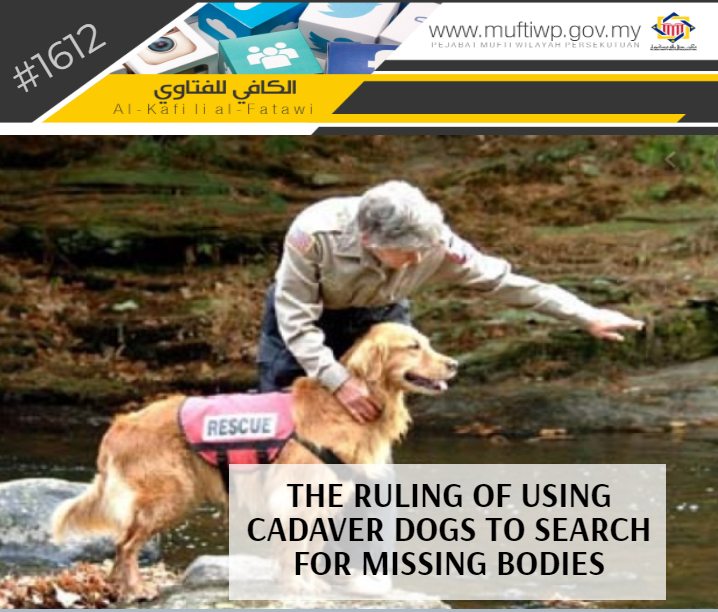 Assalamualaikum, I want to ask regarding the ruling of the usage of search or cadaver dogs to search for missing bodies or body parts in search missions such as when someone is involved in an accident and others?

Generally, Islam honours the body of a human both when the person is alive and even after his death. Thus, the correct way of handling and managing a deceased’s body is sanctioned in Islam as the last honour of the children of Adam which includes the process of bathing, shrouding, praying upon the deceased and burial. This can be seen according to a statement of Allah SWT:

“And We have certainly honored the children of Adam,”

According to Imam al-Thabari the above verse explains that Allah SWT honours the children of Adam in terms of creating them (humans) as the caliph to all other creations. Refer Tafsir Al-Thabari (15/5).

Whereas, Syeikh al-Maraghi in his commentary of the above verse said: Indeed, We have honoured the children of Adam as the best of creations, straight and upright as well as blessed with the capability to think and contemplate. Then he is guided to create, build and learn languages. Likewise, the great ability to think about wasilah of life. As well as the mastery or authority on everything on this world and managing everything on and below it. Refer Tafsir al-Maraghi (15/75).

Coming back to the question presented, we would like to state that cadaver dog refers to a dog trained to use its sense of smell to search for missing body parts especially of the human body. Thus, in truth, it has the same attribute as dogs used for hunting or in the Arabic known as الكلْبُ المُعَلَّم (trained dog).

Syarak evidences mentioned about this trained dog used with the purpose of hunting. This is as stated by Allah SWT:

Say, "Lawful for you are [all] good foods and [game caught by] what you have trained of hunting animals which you train as Allah has taught you. So, eat of what they catch for you, and mention the name of Allah upon it,”

Imam al-Thabari said that what is meant by وما علمتم من الجوارح مكلبين is all taught (trained) animals for hunting such as dogs, eagles, cheetah and others. Refer Tafsir al-Thabari (9/547).

The same is stated in a hadith narrated by ‘Adi bin Hatim RA, he said that the Prophet PBUH said:

"If you let loose your trained hounds after a game, and mention the name of Allah, then you can eat what the hounds catch for you, even if they killed the game.”

Thus, it can be understood from two of the evidences, benefitting from dogs taught or trained for certain tasks is permitted by syarak. Furthermore, it is a part of the blessings of Allah SWT to ease the affairs of all His slaves.

To conclude, after analysing the above evidences and arguments, we would like to state that it is permissible to use cadaver dogs. The reason is there are a maslahah and necessity for it to be used to hasten the process of a search for rescuers. Although, we would also like to state that it is best for the cadaver dogs to be handled by non-Muslim individuals. If the dogs are handled by a Muslim trainer, then the trainer has to ensure that he purify himself accordingly if he has contact with the dog.

Lastly, we pray to Allah SWT so that all of us are given the correct understanding in practising the religion. Amin.