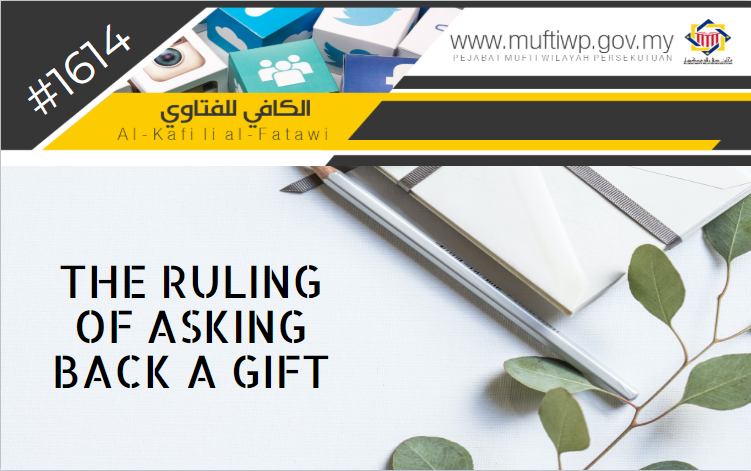 Assalamualaikum, SS Mufti. I have a question about presents. Individual A gifted B with a present. After 2 months, A asked for the present he had gave to B. My question is, is this permissible? What is the ruling for this? Hope for your explanation. Thank you.

We will start with the words of Allah SWT:

This verse explains that when a wife gave something from her mahar after her husband has given it to her (the wife), then it is permissible for the husband to accept it. And it is considered as a good deed as long as it is of her own will. Thus, it is clear through this verse that Allah SWT sanctions hibah (gifting) and states its permissibility. This is strengthened with the statement of the Prophet PBUH:

This hadith is an encouragement from the Prophet PBUH to his ummah. It is clear that hibah (giving presents/gifts) follows the guidance of the Quran, hadith of the Prophet PBUH and ijma’ ulama’ (majority of scholars). Before we discuss regarding this hadith further, we should first differentiate the meaning of hibah, present and donation.

Hibah is an akad (agreement) which refers to a change of ownership without anything in return given when the person is alive and due to his free will. Basically, it is similar to a present and donation in terms of its meaning, it is more general compared to the other two. However, there are differences.

Coming back to the question presented, it is closely related to the requisites of hibah. Its requisites are:

Basically, the akad is incomplete with just sighah aqad which is the ijab and qabul. It is necessary for the property to be received. This means, if a person who voices out his intention to give away but it is still under his ownership or in other words the property hasn’t been given to the recipient, then the giver has a right to retract his intention or do anything he wishes to the property or use it as he wants.

Thus, the akad would only be complete and be in full effect when the gift has been received and it fulfils the conditions for hibah or present, then the ownership (of the recipient) towards the property of the hibah is valid. (See al-Fiqh al-Manhaji; 6/126, al-Mu’tamad fi al-Fiqh al-Syafi’i; 3/182)

Originally, present or hibah, both are akad tabarru’at (welfare) not akad mu’awadhat (exchange). Thus, in terms of welfare, the exchange of property is not the same as in trade and others.

As discussed above, the basis of aqad hibah or present is only complete when the requisites and conditions are completed and the acceptance of the present/hibah is complete, then it is clear that the property is now owned by the recipient without any exchange being made as a trade would need.

Thus, it is impermissible for the giver to ask back the present/hibah that he has given except for a father asking back the property he has given to his child or someone who performed a conditional hibah with the condition of an exchange.

The evidence for this is based on a hadith of the Prophet PBUH:

"He who takes back his present is like him who swallows his vomit."

"The bad example is not for us. He who takes back his present is like a dog that swallows back its vomit."

Thus, through both these hadiths, the prohibition against it is clear and it shows the bad attribute of asking back a gift. Thus, Dr Wahbah al-Zuhaili said:

“Swallowing back one’s vomit is haram. The same as asking back a gift/hibah that has been given. Indeed, it is a bad attribute, hence, it is not the attribute of a Muslim.”

To conclude, it is haram for a person to ask back a gift he has given except for a father who asks back from his child and a person who gave a conditional hibah of an exchange. Lastly, we advise everyone to avoid from this attribute of asking back a gift he has given for it is a bad attribute and inappropriate of a Muslim. May Allah SWT place sincerity in our hearts in welfare matters, shower us with rizq so that we can increase our good deeds. May Allah SWT also bless all of our deeds. Wallahua’lam.