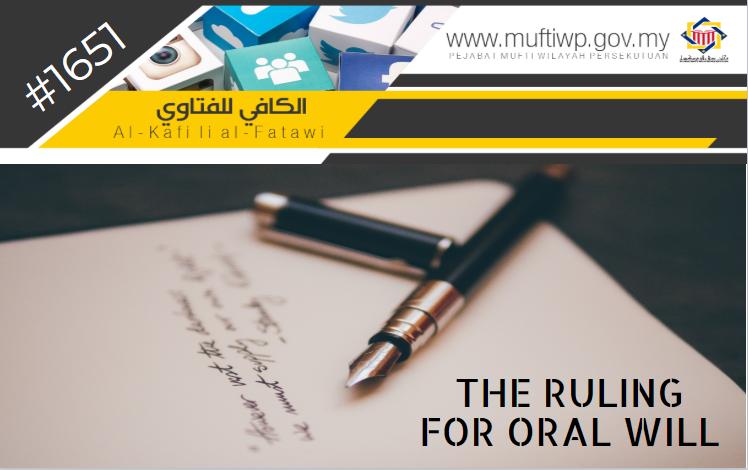 Assalamualaikum, SS Mufti. I have a question related to will. My father told me that he left some of his property that does not exceed 1/3 of his property for I am his eldest child, however, there is some dispute on the matter among the heirs for he made his intention or will verbally. Thus, is the will valid or not? Hope for an explanation from you. Thank you.

“(The divisions of inheritance is) after any bequest he [may have] made or debt.”

"You recite this ayah: After payment of legacies he (or she) may have bequeathed or debts, without causing harm. (Surah al-Nisa’:12) And indeed, the Messenger of Allah (S.A.W) judged the debt before the will,”

However, Dr Wahbah al-Zuhaili said that among the reasons Allah SWT states will first before the debt in the verse is as an encouragement and commandment to consider and fulfil the will as well as the prohibition of violating it. (See Tafsir al-Munir; 4/276)

In terms of a will, there are 4 requisites that should be fulfilled:

Thus, coming back to the question presented, there are two matters that should be considered which are the ruling for an oral or verbal will and the ruling of bequeathing to one’s heirs.

First: Regarding oral will, this matter is considered through the last requisite which is the sighah requisite (the statement of ijab and qabul). This is the utmost important requisite in making a will. An oral will was made involving the ijab (offer) and qabul (acceptance).

Among the statements for a clear ijab for a will is ‘I leave this property for him’ or ‘this property is yours after my death’ and etc. Next, ijab can also be uttered figuratively with the intention such as ‘my house is for Zaid’ and other forms of statements.

However, in making a written will, the intention is the absolute necessity for both written and verbal form of intention is of the same level in terms of expressing or explaining one’s wishes. Furthermore, written will is stronger in matters which calls for a supporting evidence or argument. Thus, if the testator is a person who is unable to speak (mute) and others, then his will is bound to be in writing and it is conditioned that his will is acknowledged by his heirs or other evidences which is a witness to him writing it. (See al-Mu’tamad fi al-Fiqh al-Syafi’i; 4/553-554)

Thus, in this matter, it is valid for a testator to leave his property verbally or orally, however, in the context of today, and the need for proof, documentation (whether it is in the form of writing or other evidences) is very important to prove the will and to consider whether it should be fulfilled or otherwise according to the presented evidences.

The reason is as an example of a will, if a person came forward and claim that the deceased left 1/3 of the property for him, then in this matter, proving it is true is crucial. Thus, written document plays an important role as evidence to justify the stated will.

In the context of the law, if there is any dispute on a will, then any claim presented to the court must be proved. If it is true the deceased did give his property to a person, then it should be proved whether it is through an oath, witnesses and supported with other evidences which will prove it as a will. If there is no evidence nor witness from among the heirs to support it, then it is difficult to prove that the oral will did take place, thus, the heirs have full right on the inheritance left by the deceased (all of it should be divided through faraid).

Second: Regarding leaving a bequeath to one of the heirs. Basically, a bequeath or will is only permissible to be made for other than the heirs. This is according to a hadith of the Prophet Muhammad PBUH:

"Allah has appointed for everyone who has a right what is due to him, and no Wasiyah (will) should be made to an heir."

In this matter, the above hadith clearly states that a will is impermissible to be made for an heir. Although, if the other heirs agree with the will made, then it is permissible. The discussion on this issue can be referred to our previous article titled AL-KAFI 1255: THE RULING OF BEQUEATHING SOME PROPERTY TO ONE’S CHILD in the official website of the Mufti of Federal Territory Office.

To conclude, oral will is valid according to syara’ can be fulfilled, however, a written will is better so that it will act as a documented evidence for the will made at the same time prevent any disputes, arguments and disagreements among the heirs and the recipient of the bequeath, for it is best to avoid such matters. Although, if the heirs agree to the oral will made, then it is valid and should be fulfilled. Lastly, we advise the public to make a will which is officially documented so that it can be fulfilled one day with the needed proof. May Allah SWT give us the correct understanding in His religion, firm our hearts and bless all our deeds.