AL-KAFI #1652: THE USAGE OF HAND SANITIZER AND PRAYER 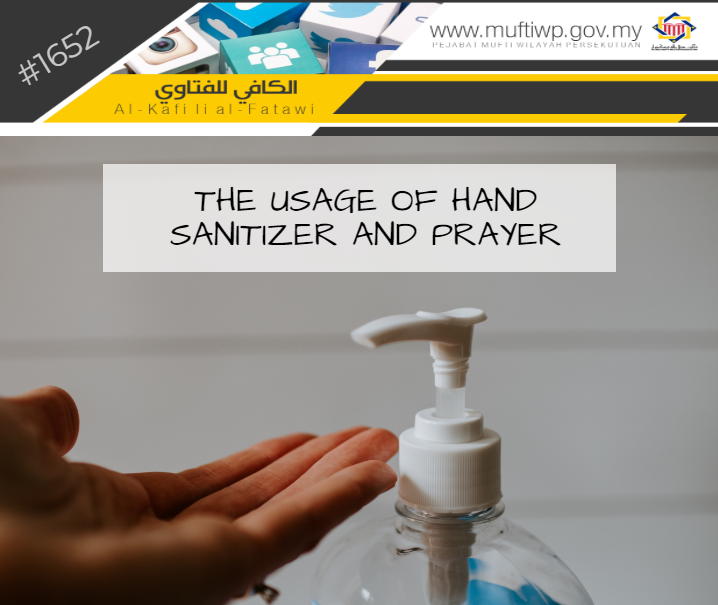 Assalamualaikum SS Datuk Mufti, there are mosques that place hand sanitizers at the mosque’s entrances. So, is it permissible to use hand sanitizer in prayer even if there is alcohol in it? Hope for an explanation. Thank you.

In performing worship, among the obligatory valid conditions is to remove any najis from a person’s body and clothing. The issue we will discuss this time is the usage of hand sanitizer in prayer. Thus, it is best to first discuss the ingredients or contents in the hand sanitizer itself.

The usage of hand sanitizer is to kill any bacteria on the surface of the skin. It is also an effective chemical in killing germs and bacteria and better tolerated compared to washing hands using water and soap.

According to the Food and Drug Administration (FDA) guideline, every hand sanitizer product on the market must contain ethyl alcohol (ethanol), isopropyl alcohol (isopropanol) or benzalkonium chloride as the main ingredient.[1]

Furthermore, there are also hand sanitizers that use chemical other than alcohol to kill microorganisms and bacteria such as povidone-iodine or triclosan.

The amount of each chemical in a hand sanitizer according to the guideline set by the World Health Organization which states the chemicals used in 10 litres of hand sanitizer must contain 8333ml of 96% ethanol, 417ml of 3% hydrogen peroxide and 145 of 98% glycerol or 7515ml of 99.8% isopropyl alcohol, 417ml of 3% hydrogen peroxide and 145ml of 98% glycerol. [2]

The Ruling of the Usage of Alcohol

According to the majority of the scholars, alcohol is najis for it included as an intoxicant chemical. (See al-Fiqh al-Manhaji, 1/183-184). This is as stated in a hadith narrated by Ibnu Umar RA, where the Prophet PBUH said:

Prof Dr Basri bin Ibrahim al-Hasani al-Azhari stated in his book that scholars have differing opinions as to whether alcohol is najis or not. The basis of the matter is scholars agreed that alcohol is najis but they have differing opinions as to the characteristic of its najis. Some scholars hold the opinion that the matter of alcohol itself is considered najis. Whereas another opinion state that the matter of alcohol itself is not najis. Consequently, it is najis through its meaning which means it is najis and prohibited from drinking it because it is impure the same as drugs and others like it. (See Isu-isu Fiqh Halal & Haram Semasa (Contemporary Fiqh Issues of Haram and Halal), pg. 598)

Furthermore, the 7th National Muzakarah Committee for Religious Matters Malaysia which convened on the 11-12th April 1984 discussed Alcohol According to Islamic View. The Muzakarah decided:

To get more information on this, please refer to our previous article titled IRSYAD AL-FATWA SERIES 185: THE RULING OF USING ALCOHOL SWAB AND PERFUMES CONTAINING ALCOHOL through the official website of the Office of Mufti of Federal Territory.

Due to the emergence of the spread of the COVID-19 virus in our country, the implementation of cleanliness is the main factor in decreasing the risk of being infected by the virus. Thus, the issue of using hand sanitizer in prayer arises, for is the alcohol in the hand sanitizer considered as najis?

Coming back to the above question asked and the opinions of scholars presented, it can be concluded that hand sanitizer is not najis and is permissible to be used in prayer and it is not considered as though we are bearing najis. This is clear as decided by the National Muzakarah Committee which states medicines and perfumes that contains alcohol is permissible and forgiven.

May Allah SWT give us sahih understanding in His religion and guide us to practise His commandments the best we can.