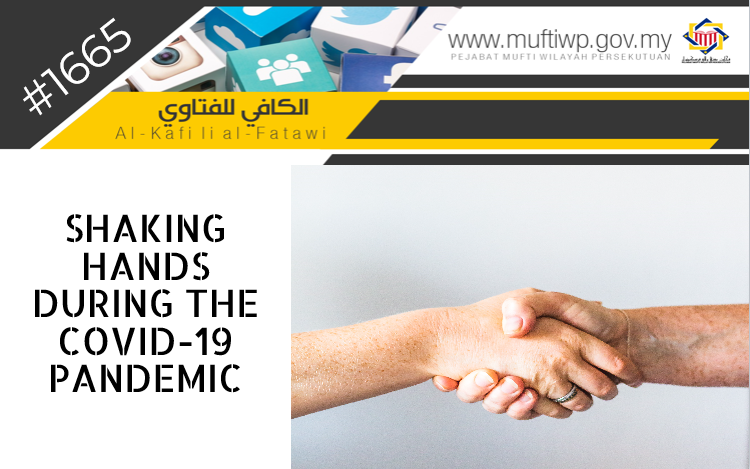 Assalamualaikum. What is the ruling of shaking hands in our current situation of the COVID-19 outbreak?

Undeniably, shaking hands with the purpose of silaturrahim for Allah SWT is an honoured act and is promised with forgiveness. This is as stated in a hadith narrated by al-Bara’ bin Azib, where the Prophet PBUH said:

“Two Muslims will not meet and shake hands having their sins forgiven them before they separate.”

Shaking hands when meeting someone is sunnah. This is the ijma’ of scholars. Furthermore, Ibn Battal said that shaking hands is a good and commendable act. (See Fath al-Bari, 11/55 and Tuhfah al-Ahwazi, 7/426)

It is also stated by jurists that shaking hands is sunnah according to numerous sahih and hasan narrations. (See al-Mausu’ah al-Fiqhiyyah al-Kuwaitiyyah, 356/37)

In the above issue, we found that some scholars or fatwa bodies of authorities are divided into several opinions. Some restrict it while others permit it. For this, we divide it into two situations:

In our current situation in Malaysia, it has reached a critical stage where we are commanded to strive to prevent the spread of the virus. The reason is shaking hands is one of the ways the virus is spread. Thus, in our opinion not shaking hands is the appropriate step to be taken as a precautionary step (ihtiyat) and initiative to stop the virus from continuing to spread even when the original ruling of it is sunnah.

The reason is there is a sahih narration from the prophet PBUH by Imam Muslim regarding the commandment of the Prophet PBUH to distant oneself from a person suffering from leprosy. The reason for this is leprosy is a contagious disease, thus the directive of the Prophet PBUH to avoid meeting the leper is to stop the spread of the disease to other people or regions that hasn’t been infected.

There was in the delegation of Thaqif a leper. Allah's Apostle (ﷺ) sent a message to him: “We have accepted your allegiance, so you may go.”

According to Imam al-Nawawi, there are two hadiths which is seen as though there is a contradiction in interacting with a leper. Most scholars are inclined to harmonize both hadiths by saying that the instruction of the Prophet PBUH to run away or distant oneself from a leper is sunnah as a precautionary step and not wajib. (See al-Minhaj, 14/228)

“Don't consider anything insignificant out of good things even if it is that you meet your brother with a cheerful countenance.”

Considering the above considerations, we are inclined towards the opinion that for the time being one should avoid shaking hands with others until the situation return back to normal. However, we can still greet each other by placing one’s hands on the chest as we explained earlier. We end discussion in this issue citing the opinion of UAE Fatwa Syar’ie Committee that issued the statement: “It is wajib to support and comply with any effort to stop the spread of the virus and not to spread information that did not come from the government official to ensure the stability and peace.” [1]

Lastly, let us all pray for protection from Allah SWR with the following supplication:

“I seek refuge in the Perfect Words of Allah from the evil of that which He has created,”