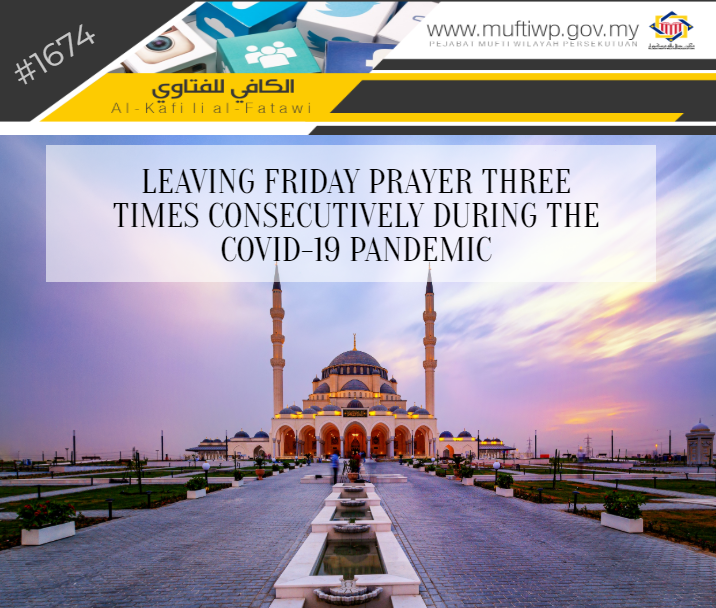 Asalamualaikum ustaz. If the current Restriction of Movement Order which also includes the restriction of attending Friday and congregational prayer is extended, am I considered as the people who are warned because they leave the Friday prayer three times consecutively? Hope for an explanation.

Attending Friday prayer is one of the syara’ commandments upon a mukallaf Muslim man. This is in accordance with the saying of Allah SWT which says:

O you who have believed, when [the adhan] is called for the prayer on the day of Jumu'ah [Friday], then proceed to the remembrance of Allah and leave trade. That is better for you, if you only knew.

It can be understood that attending and performing Friday prayer is the attributes of a Muslim who prioritizes his obligation as a servant of Allah SWT than worldly benefits like performing trade during this time.

Still, the commandment of performing Friday prayer congregationally is excused to those with excuses permitted by syara’. This is in accordance with a hadith narrated by Ibn Abbas R.Anhuma where he said that the Prophet PBUH said:

“Whoever hears the call and does not come, his prayer is not valid, except for those who have an excuse,”

According to the above hadith, basically, one is commanded to attend congregational prayer if he hears the adhan. Still, if there is a certain excuse, then he is excused from attending the call. While in another narration, the Companions asked the Prophet PBUH, what is meant by excuse? The Prophet PBUH answered:

So, it is clear in the above hadith that the feeling of fear or illness are included under the category of excuse which prevent a person from attending congregational prayer. Then, the jurists (fuqaha’) further detailed the level of fear which permits someone to not perform the Friday and congregational prayer. This is what is mentioned by Sheikh Ali al-Qaradaghi as follows:

“It is permissible to suspend Friday and congregational prayer during the virus outbreak due to the feeling of fear of infection.” He added that the permissibility is on the condition that the fear that the infection really takes place and not only a prediction. Refer https://bit.ly/2WvN367

Hence, due to the advice and opinion from the authoritative experts, order is made to suspend all congregational and Friday prayer. So, not attending it is an excuse permitted by syarak which is the fear of infection of the virus.

Coming back to the question presented above, we state that it is true that there is a warning upon those leave the Friday prayer three times consecutively according to syara’. This is in accordance with a hadith narrated by Abu al-Ja’d al-Dhamri (some said that it is al-Dhumairi) R.A where he said that the Prophet PBUH said:

He who leaves the Friday prayer (continuously) for three Friday on account of slackness, Allah will print a stamp on his heart

While in another narration from Jabir bin Abdillah RA, he said that the Prophet PBUH said:

Whoever misses jumu'ah three times with no cogent excuse, Allah (SWT) will place a seal on his heart

Both narrations above clearly show us the threat and warning in the hadith is bound with the condition of leaving Friday prayer because he deprecates, belittles and leaves the commandment without any dharurat.

Syeikh Badruddin al-‘Aini in his commentary on the above hadith narrated by Abu Dawud said: “This chapter explains the grave warning for those who miss the Friday prayer without any excuse.” He added, the phrase تهاونا بها means: “(Leaving it) due to being lazy and negligent in performing it”. Refer Syarah Abi Daud, Badr al-Din al-‘Aini (4/371).

When a slave falls ill or travels, then he will get reward similar to that he gets for good deeds practiced at home when in good health.

In conclusion, after we analyze the evidences and arguments presented, we are of the opinion that if this Restriction of Movement Order takes a long time that resulted in the suspension of Friday prayer three times consecutively by considering the factor of fear that the Covid-19 pandemic will spread further, then leaving the Friday prayer due to this reason is not included under the warning in the hadiths. Wallahua’lam.

Lastly, we pray to Allah SWT to give us true understanding for us in religion. Ameen.