AL-KAFI #1677: IS IT NECESSARY TO CALL OUT THE ADHAN AND IQAMAH WHEN WE ARE PRAYING AT HOME? 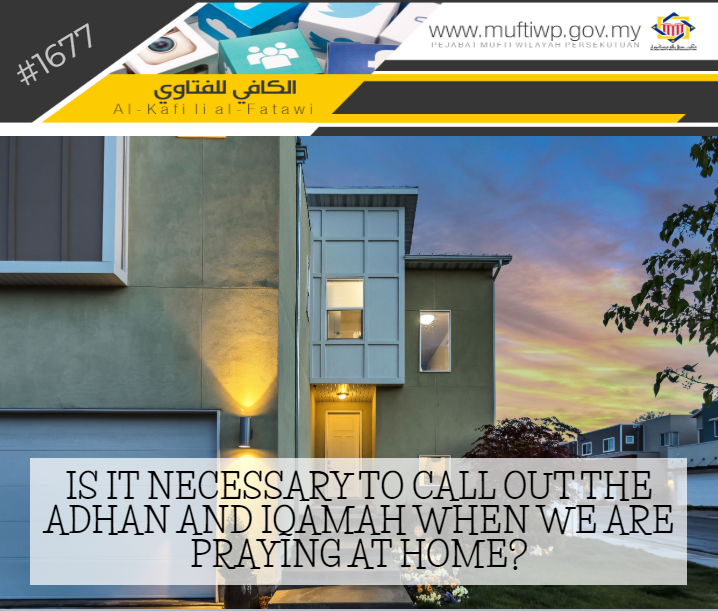 Assalamualaikum ustaz, during the movement control order now, it is impermissible for us to perform congregational prayers at mosques. My question is when we perform our prayers at home, is it necessary for us to call out the adhan and iqamah? Hope for an explanation.

Adhan is one of the eminences of Islam with the purpose of informing the starting of the times for the five obligatory prayers. As for the iqamah, it is called out with the purpose of informing that prayer is going to be performed. Adhan is sanctioned only when the time of prayer begins and this is as stated in a hadith narrated by Malik bin al-Huwairith RA, where he said the Prophet PBUH said:

“And one of you should pronounce the Adhan for the prayer when its time,”

Coming back to the question presented, we would like to state that according to madhhab al-Syafi’e, it is sunnah muakkad to call out the adhan and iqamah for all five obligatory prayers. This is stated by Imam al-Nawawi:

“(In) our madhhab the famous for it (opinion) is that both (adhan and iqmah) are sunnah for all prayers when a person is present (not travelling) and also when he is travelling, when it (prayer) is performed in congregational and when alone. Both of them are not wajib, thus, if a person leaves them for both of them then the prayer is still valid for both prayer performed in congregational and alone.” Refer Al-Majmu’ Syarah al-Muhazzab, Al-Nawawi (3/82).

This opinion is supported by several jurists of other madhhabs such as madhhab Maliki. Imam Ibn Rushd said regarding the ruling for iqamah: “Indeed, it (the iqamah) according to jurists is the right of those who pray alone or in a congregation and it is sunnah muakkad, according to zahiriah scholars it is fardhu. According to the first opinion, a prayer is not invalid if it (the iqamah) is left, while according to the second opinion (al-zahiriyyah), it is invalid.” Refer Bidayah al-Mujtahid, Ibn Rushd (pg. 109).

In our opinion, it is prioritized for a person to call out both the adhan and iqamah every time he intends to perform the prayer regardless of whether it is alone or in congregation during this time. Wallahua’lam.