AL-KAFI #1678: THE RULING OF NEGLECTING PLANTS UNTIL THEY ARE DAMAGED AND DIE 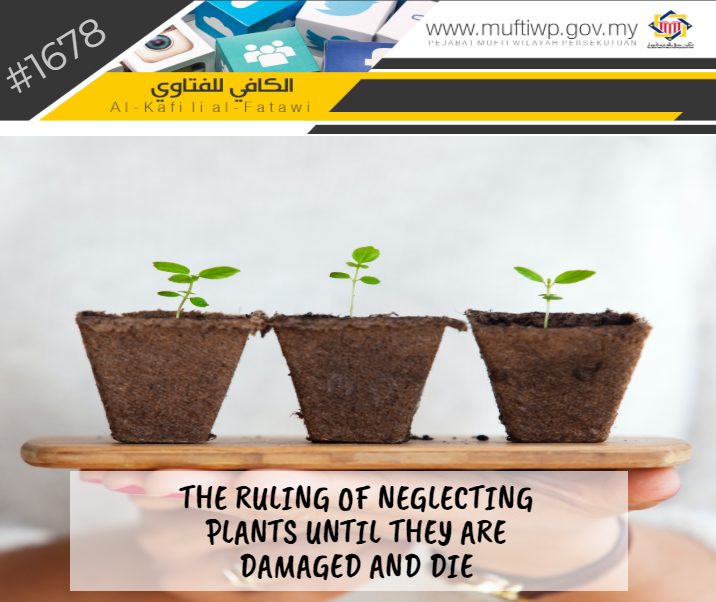 Assalamualaikum w.b.t, what is the ruling if I neglect my flowers and plants without watering, fertilizing and potting them until they wilt and die? Am I considered sinful the same as the woman stated in the hadith where she is placed in hell for locking up her cat and neglects it?

Encouragement on Planting in al-Quran and al-Sunnah

“And within the land are neighbouring plots and gardens of grapevines and crops and palm trees, [growing] several from a root or otherwise, watered with one water; but We make some of them exceed others in [quality of] fruit. Indeed, in that are signs for a people who reason.”

"There is none amongst the Muslims who plants a tree or sows seeds, and then a bird, or a person or an animal eats from it, but is regarded as a charitable gift for him."

According to Imam Ibn Hajar al-‘Asqalani, the rewards of this charity is continuous for as long as the plant is alive, even after the owner or person who planted it has passed away, or the plant has changed owners. (Refer Fath al-Bari Syarh Sahih al-Bukhari 5/4)

"If the Final Hour comes while you have a palm-cutting in your hands and it is possible to plant it before the Hour comes, you should plant it."

The Ruling of Neglecting Plants Until They Wilt and Die

According to Imam al-Nawawi it is makruh (undesirable) if a person neglects to water his plants and trees while he is able to do so, for it is included under the chapter of wasting property (idha’ah al-mal). (Refer Raudhah al-Tolibin wa ‘Umdah al-Muftin 9/121)

Imam Ibn Hajar al-Haitami added that if a person does not purposely neglect to water or take care of his plants but it happens because he is too busy, then it is not makruh. He also said that although it is a waste of property it is not considered as haram. The reason is idha’ah al-mal of which is haram is when money is thrown into the sea, for it is a direct and clear form of wasting property. (Refer Tuhfah al-Muhtaj 8/373-374)

However, although scholars do not ruled negligence on plants as haram, it is actually a contradiction to the religion’s encouragement to have ihsan and do good to every creation in every matter. Syaddad bin Aus RA narrated the Prophet PBUH said:

Ihsan here includes watering and caring for plants, whether they are edible or ornamental plants. All of them are creations of Allah SWT and humans are made as the Caliph to maintain and preserve all life on earth. Allah SWT states in the Quran:

“He has produced you from the earth and settled you in it,”

Furthermore, the makruh ruling stated by scholars is a wara’ attribute of scholars who would not easily rule something as haram. The reason is if it is ruled as haram that it would burden those who are involved in the field of agriculture, while one of the highest principles of the Islamic shariah is taysir wa raf’u al-haraj, which is an inclination to ease and remove the burden of people.

To conclude, we would like to state that the original ruling of purposely neglecting one’s plants until they die is makruh according to most scholars.

However, it does not mean that we should take the matter of taking care of our plants lightly. The reason is it is a form of wasting one’s property which is prohibited according to syarak and is not in line with the encouragement in Islam to do good and have ihsan in everything that we do. Moreover, it contradicts the hadith evidences which clearly call for maintaining and caring for plants.