AL-KAFI #1679: THE RULING OF LEARNING KNOWLEDGE OTHER THAN THE KNOWLEDGE OF RELIGION 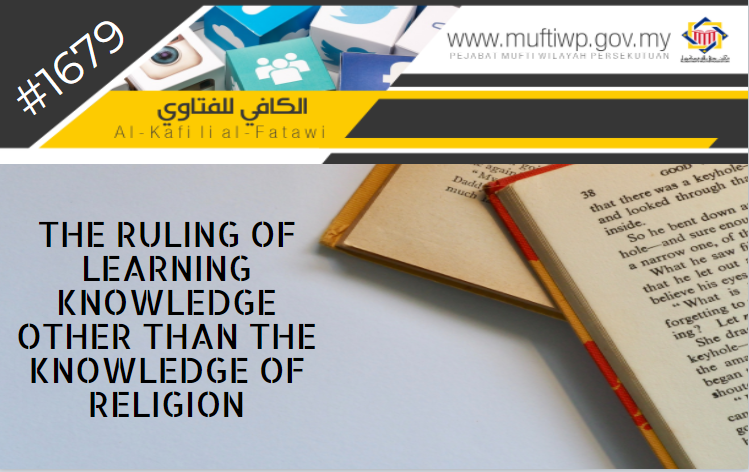 I want to ask a question, what is the ruling for us to learn other knowledges (worldly knowledge) other than the knowledge of religion such as the knowledge in medicine, business and others? Is this permissible in Islam? Hope for an explanation. Thank you.

“For there should separate from every division of them a group [remaining] to obtain understanding in the religion and warn their people when they return to them that they might be cautious.”

In this verse, Allah SWT clearly states the commandment for some Muslims to learn religious matter and teach them to the public. Syeikh al-Sa’di when commenting on this verse said, Allah SWT commanded some of its ummah to learn the knowledge of syarak and the prohibitions of Islam, understanding its secrets and wisdoms as well as learning other knowledges and subsequently teach them his people after some of them has returned (from jihad). [See Tafsir al-Sa’di; pg.355]

Learning is a commandment in Islam. There are numerous evidences from the Quran and al-Sunnah as well as the words of scholars and hukama’ regarding the advantages of those who study. We have discussed this matter in our article titled Irsyad al-Hadith Series 109: The Advantages of Studying.

Imam al-Nawawi explained this matter in his famous book:

As we all know, fardhu kifayah is a wajib matter for a person or a group of Muslim society, regardless of who the person that fulfils it. When it is performed, then the obligation is fulfilled and abrogated for all other Muslims. However, if none performed it, then all of them will bear the sin. Thus, here, it can be understood, fardhu encompasses various fields and wide scope which involves comprehensive aspects of life such as economy, politics, law, military and others. (See al-Mausu’ah al-Fiqhiyyah al-Kuwaitiyyah; 32/96)

Not only that, learning knowledges other than the knowledge of religion depends on the intention of the student, in terms of if he learns worldly knowledge such as the knowledge in business with bad intentions such as to destroy or oppress the Muslims, then it is surely impermissible and according to syarak and could even lead to haram according to Sadd al-Zari’ah which is preventing the permissible that could lead to haram. This is in accordance with a renowned Islamic legal maxim:

“Whatever that leads to haram is haram.”

To conclude, we would like to state that the ruling of learning knowledge other than religious knowledge is fardhu kifayah and if there are others who are already mastering it, then the obligation to learn it for everyone else is abrogated. Thus, if there are people who wishes to learn it, then it is permissible, however, it is on the following conditions or dawabith:

Lastly, we pray to Allah SWT to give us the correct understanding in His religion and grant us the strength and sincerity in studying as well as blessing our every deed.