AL-KAFI #1681: WHOSE OBLIGATION IS THE SUSTENANCE FOR AN ILLEGITIMATE CHILD? 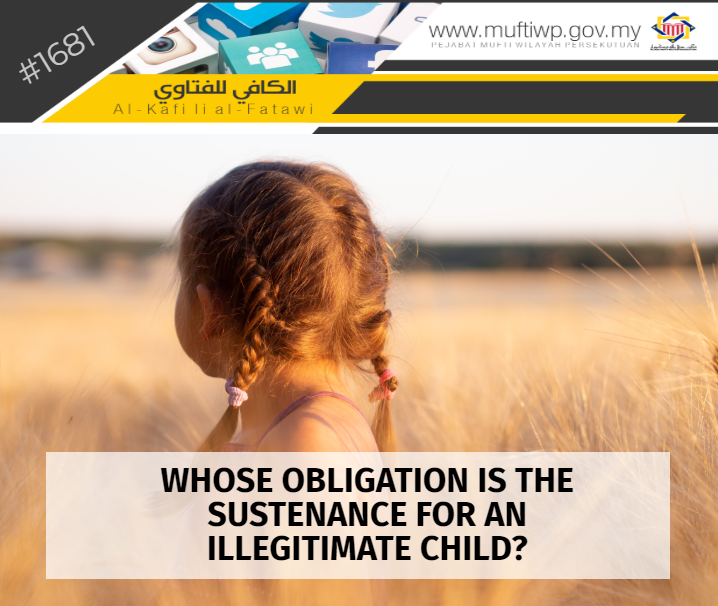 Assalamualaikum w.b.t. I would like to ask for an illegitimate child, who is obligated to provide for his sustenance?

The child is the bed's and for the fornicator is the stone.

THE DEFINITION OF ILLEGITIMATE CHILD

Hence, according to the above hadith, an illegitimate child is linked to his mother and is not be linked to his biological father according to the opinion of the majority of scholars from the four madhhabs. This matter is also clearly stated by the Muazakarah of National Fatwa: “Illegitimate child is impermissible to be linked to the man which caused his birth or anyone who claims to be the father of the child. Hence, he may not inherit from one another, will not be a mahram and may not be the wali”. (Refer Kompilasi Pandangan Hukum Muzakarah Jawatan Kuasa Fatwa Majlis Kebangsaan Bagi Hal Ehwal Ugama Islam Malaysia, pg. 206-207). The rulings related to an illegitimate child can be referred to our past articles:

Hence, based on the above explanation, a question arises, who is responsible to provide the sustenance for this illegitimate child?

THE OBLIGATION OF PROVIDING THE SUSTENANCE

Originally, the obligation of providing the sustenance for the children and wife is under the responsibility of a father. This is as stated in the Quran:

No mother should be harmed through her child

Based on this verse, the scholars state: “When nafaqah (sustenance) is obligated upon the father to provide for originally, then it is wajib (the nafaqah) upon the mother when there is a breakage (in nasab), and this is prioritized”. (Refer: Al-Tahzib fi Fiqh al-Imam al-Syafie, 3/156).

Imam Khatib al-Bujairimi said: “And zakat fitrah of the illegitimate child is upon his mother because he has no father as nafaqah (of a child) is obligated upon a father”. (Refer: Hasyiyah al-Bujairimi, 4/437).

Imam Sayyid al-Bakri said: “And zakat fitrah for an illegitimate child is upon his mother because nafaqah (of the child) is wajib upon the mother, and this is the same for child of li’an”. (Refer: I’anah al-Tolibin, 2/169). It is stated in another place: “And it is wajib upon her the nafaqah of her child in which it is wajib for the mother of the illegitimate child” (Refer: I’anah al-Tolibin, 2/335).

(1) If a woman neglects or refuses to maintain her illegitimate child who is unable to maintain himself or herself, other than a child born as a result of rape, the Court, upon due proof thereof, may order the woman to make such monthly allowance as the Court thinks reasonable.

However, the scholars put specific conditions in providing the sustenance for the illegitimate child in which a mother is obligated to provide for sustenance to her child in the following situations:

The child is unable to be independent. For a daughter is until she gets married or until she has her own career.

The child is poor, does not have his own property to support herself.

The child is handicapped. If the child is has grown to a mature age or reaches puberty and is able to live in his or her own, it is not wajib anymore to provide for his or her sustenance.

The child is still studying.

The mother is able to provide for her sustenance. If the mother is unable to do so, then the obligation moves to the warith (of the mother). (Refer: Al-Fiqh al-Islami wa Adillatuhu, 10/7413-7415).

However, if a mother is unable to provide for the sustenance, the obligation is upon the warith of the mother. This is as mentioned in the Quran:

After analyzing the above discussion, it is clear that the obligation of providing for sustenance and nafaqah for an illegitimate child is upon the mother according to syarak rulings. This is because the child is only linked to his or her mother and not to the man who had intercourse with the mother, except for children born due to rape. Wallahua’lam.