AL-KAFI #1686: IS A MARRIAGE VALID IF THERE IS NO HANDSHAKE DURING THE AKAD? 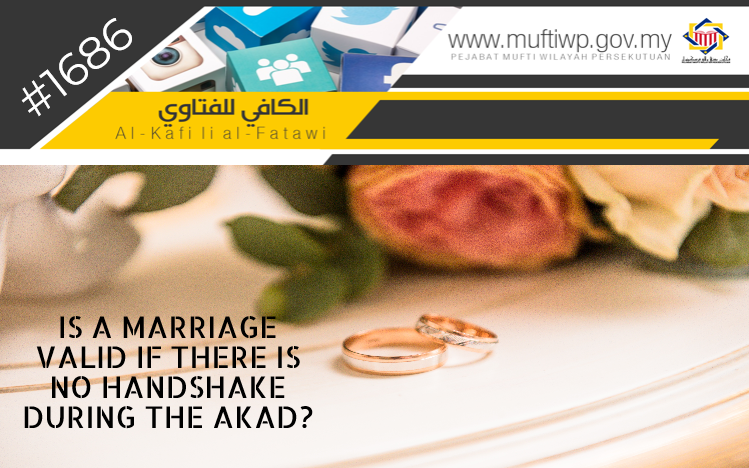 Assalamualaikum ustaz, recently, there was a viral video of a couple of whom their marriage was recorded, but, during the akad, the groom did not shake hands with the qadi. Is the marriage valid? Hope for an explanation from ustaz. Thank you.

Islam encourages its followers to marry for it is the sunnah of the Prophet PBUH. Furthermore, there are numerous good and benefits of marriage, towards the individual as well as the society. This is stated in a hadith narrated by Abu Ayyub RA, he said:

"Four are from the Sunan of the Messengers: Al-Hayat, using Atar, the Siwak, and marriage."

Coming back to the question asked regarding shaking hands during the utterance of akad for marriage, then the requisite of sighah should be analysed, whether shaking hands is a valid condition of it.

Sighah meant here is the sighah of akad which is the utterance or action of the person performing the akad (agreement) which shows his consent. Jurists are of the opinion that sighah should consist of ijab (pronouncement of giving) and qabul (pronouncement of acceptance). (See al-Mausu’ah al-Fiqhiyyah al-Kuwaitiyyah, 30/200)

Dr Muhammad Zuhaili explained that the akad for marriage is invalid except with sighah of ijab and qabul.

Ijab is the utterance from the wali of the bride saying “I marry you to…” or other phrases with the same meaning.

Qabul is the utterance of the groom saying “I accept this marriage,” “I accept her as my wife,” “I gave my consent for this marriage.” (See al-Mu’tamad fi al-Fiqh al-Syafi’e, 4/53)

In al-Fiqh al-Manhaji it is stated, the conditions for the akad are:

Coming back to the question asked and the jurists’ discussion, we can conclude that not shaking hands for the akad utterance will not invalidate the akad and the marriage is valid. This is due to the fact that the valid condition of akad for marriage is the utterance of ijab and qabul together with the words of marriage or nikah.

Thus, shaking hands during the akad for marriage is not a valid condition of akad but a sunnah of the Prophet PBUH for bai’ah or meetings with his Companions. The same is stated by Imam Badruddin al-A’ini who cited the opinion of al-Karmani who said shaking hands is a sign or signal of owning up to the responsibility, whether it is for marriage or agreement. (See Umdah al-Qari syarh Sahih al-Bukhari, 24/277)

Furthermore, for the akad to be valid, it must fulfil the other requisites of the akad for marriage such as wali, two witnesses, the groom, the bride for the marriage ceremony.

May Allah SWT give us a sahih understanding in practising His religion and guide us to always obey His commandments the best we could.