AL-KAFI #1695: WHEN SHOULD THE INDEX FINGER BE RAISED DURING TASYAHHUD? 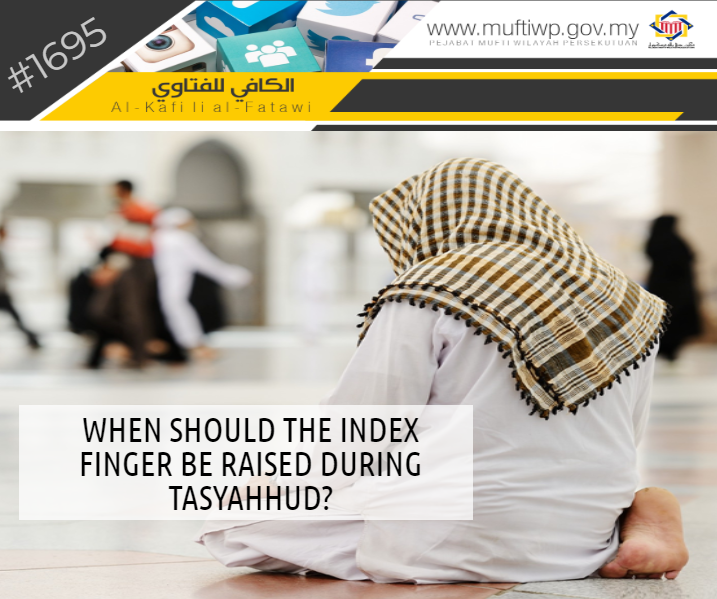 When is it sunnah to raise the index finger during tasyahhud? Is it when we start to recite ‘Asyhadu alla Ilaha illa Allah’? Furthermore, is it necessary for my index finger to be raised throughout the tasyahhud until I give the salam?

Raising the index finger while sitting for tasyahhud is tsabit through various hadiths, among them is a hadith from Abdullah bin Umar R.Anhuma who narrated the methodology of the Prophet PBUH prayer; during the tasyahhud:

“(the Messenger of Allah) sat at tashahhud, placed his right palm on the right thigh and closed all his fingers and pointed with the help of finger next to the thumb, and placed his left palm on his left thigh.”

Imam Ibn Hajar al-Haithami further detailed that the index finger should be raised at the letter ‘hamzah’ of the word إلا. Besides, he and Imam Khatib al-Syarbini also added when the finger is raised it is also sunnah for the finger to be slightly bent rather than it being straight pointing to the qibla with the intention to uphold the tawhid of Allah and being sincere towards Him. (Refer Tuhfah al-Muhtaj 2/79-80 and Mughni al-Muhtaj 1/378)

According to Imam Sulaiman al-Jamal and Imam al-Bujairimi, the index finger must stay in this state until he stands up from the first tasyahhud or until he gives salam in the final tasyahhud. (Refer Hasyiyah al-Jamal ‘ala al-Syarh al-Minhaj 1/384 and Hasyiyah al-Bujairimi 'ala al-Khatib 2/73)

As for if a person’s index finger is severed or cut, the sunnah ruling is abrogated during the tasyahhud and it is makruh to raise the index finger of his left hand. (Refer Syarh al-Nawawi ‘ala Muslim 5/81, Tuhfah al-Muhtaj 2/79-80 and Al-Najm al-Wahhaj fi Syarh al-Minhaj 2/159)

In short, we would like to state the opinion of madhhab Syafi’e, it is sunnah to raise the index finger when starting the recitation during tasyahhud at the hamzah letter of the word إلا, and the finger should be slightly bent along with intention of raising the finger as a signal of tahqiq of Allah SWT’s tawhid. Furthermore, the index finger of the right hand should stay in this position until he stands up from the first tasyahhud or until he gives his salam in the final tasyahhud.