AL-KAFI #1701: THE WASHING IN ABLUTION STARTS FROM THE ELBOW? 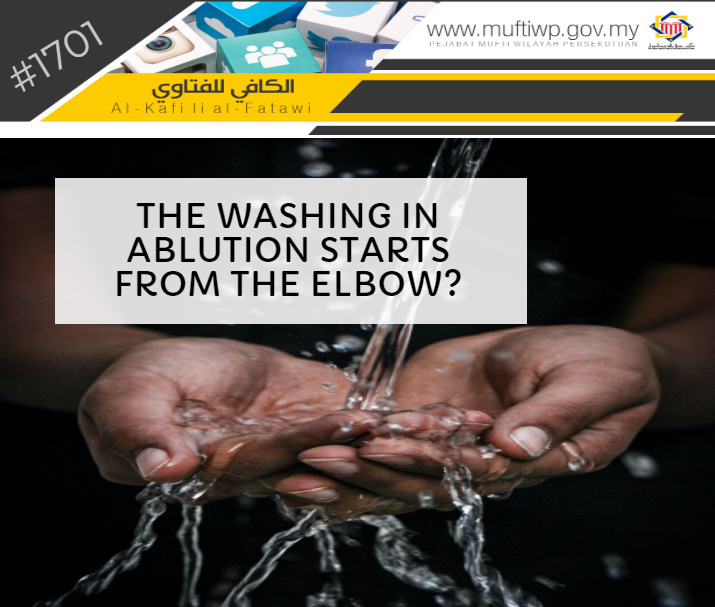 One of my friends told me that there are various mistakes in the way Muslims in Malaysia took their ablution. Among the mistakes is when a person washes his hands during ablution, it should start from the fingers up to the elbow. The correct way is a person should start washing his hands from the elbow and until the end of his fingers. My friend’s explanation baffles me and thus, I’m seeking the opinion from the Mufti’s Office. Thank you.

“It is sunnah for a person to start (the washing of the hands) from his right hand, then left, according to the words of the Prophet PBUH:

“When you perform ablution, begin with your right limbs.”

If he starts from his left then his right, this is sufficient. This is also the opinion of most scholars. While the opinion of Fuqaha’ al-Sab’ah (The Seven Fiqh Scholars): This is insufficient. The evidence of our madhhab (Syafi’iyyah) is the statement of Allah SWT:

“… wash your faces and your forearms to the elbows,”

Which means Allah SWT did not differentiate the elbow. Al-Saymari said: If a person himself washes his hands, then he takes water with his palms then he brings it to his elbows and pour water, the same on his left hand. When another person pours water for him, asking the person to pour the water on his elbow until it reaches the ends of his hands in the situation where the other person stands by his side, it is wajib to include both elbows in the washing, this is the opinion of most scholars except Zufar and Abu Bakar bin Daud which states the elbow is the boundary and it is not wajib to be included in the washing.”

This is in line with a hadith by Imam al-Bukhari (no.1934) and Imam Muslim (no.226) from Saiyidina Uthman bin al-‘Affan:

It is said that the methodology of washing hands during ablution starting from the elbow is actually the practice of the Shiite from madhhab Ithna ‘Asyariyyah. Cited from the commentary of al-Mizan fi Tafsir al-Quran by Muhammad Hussein al-Tobatoba’ie regarding the commentary of the sixth verse of surah al-Mai’dah:

“It is explained previously in His statement “إلى المرافق” related with His other statement “أيديكم” then the washing is subjected to the area, without any relation with its purpose, which means it is started from the elbow until the fingers just as the norm of people when washing their hands in other situations other than the activity of ablution or maybe it starts from the ends of the fingers and ends at the elbow. However, according to the narrations warid from the Imam of Ahl Bat – Alayhimussalam – they issue the fatwa of the first form without the second form.”

According to the above facts and explanations, we are inclined to state that the methodology of washing hands when taking ablution, it is sunnah to start from the fingers of the hands washing it all the way to the elbow, and not starting from the elbow, unless if another person is helping to pour the water for us. However, if it is started from the elbow, the ablution is still valid for the area of the hands which is obligated to be washed is already washed but some of its fadhilat are lost. This is based on sahih hadiths narrated by the scholars of Ahlus Sunah from the Prophet PBUH explaining the meaning of the Quran. Wallahua’lam.

Hopefully, this explanation would give understanding to the questioner. Let us all pray to Allah SWT give us all hidayah and taufiq to uphold His commandments completely.