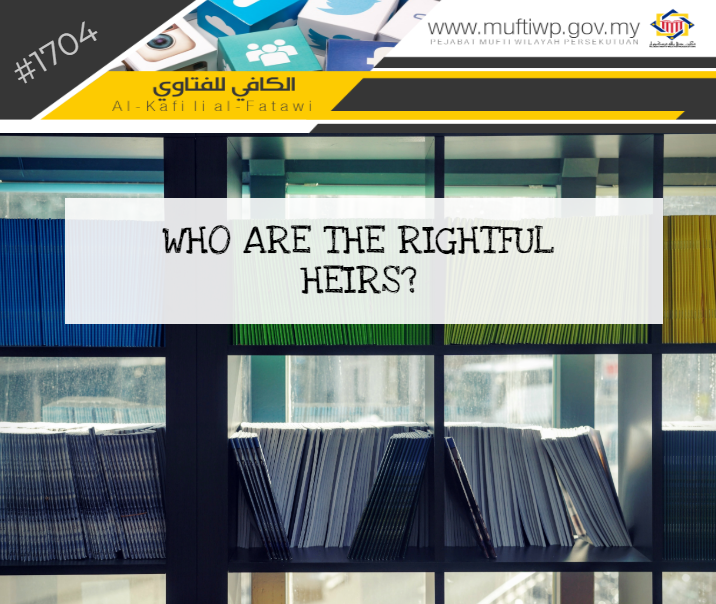 Assalamualaikum w.b.t. I have a question on inheritance. What is the way to decide whether a person is eligible and rightful to inherit the inheritance? Hope for an explanation. Thank you.

In Surah al-Nisaa’ starting from the seventh, eleventh and twelfth verses, as well as other verses, Allah SWT narrates and states numerously on the division of the inheritance for each rightful and eligible people of it. So, from these verses, we can see the reasons which obligates one to inherit the inheritance.

Imam al-Rahabi states in his matn:

The reason to inherit one’s inheritance are three,

Those who hold these reasons will inherit,

Which are marriage, wala’ and lineage,

There are none other than these three.

Dr. Muhammad al-Zuhaily stated in his book that the reasons for inheritance are four things, in which he added the fourth reason which is Islam and the baitulmal. So, it can be concluded that there are four reasons of inheritance which are:

Lineage meant here is the relationship or real ties through blood and family bond or a relationship that connects between the warith (heir/inheritor) and the testator. So, they consist of usul and furu’ to the deceased, furu’ for both parents as well as furu’ for grandparents. [See: al-Mu’tamad fi al-Fiqh al-Syafi’i; 4/350].

Lineage is not the same as marriage relation in terms of it is not easily removed when compared with marriage which prone to separation and breakage.

It is through valid marriage according to syarak between man and woman, includes the meaning of a husband and a wife or more, even if they did not have intercourse were alone together yet. This is based on the twelfth verse of surah al-Nisaa’.

Both husband and wife have a right to inherit from one another. They also have the right to inherit during iddah of talaq raj’ie. Also see our article on the inheritance of a divorced woman in the official website of Mufti’s Office of Federal Territories. However, a husband and a wife shall not inherit his or her spouse if the marriage is invalid. [See: al-Fiqh al-Manhaji; 5/76].

According to the Arabic language, wala’ means family relationship. The meaning of wala’ here means the freeing of slaves. It is the specialty for those who had slaves. The ex-masters will inherit their ex-slaves whether men or women. These ex-masters are considered as asabah due to life. (al-Asabah bi al-Nafs). The Prophet PBUH said:

When a Muslim passes away and he has no heirs according to the above stated reasons a person has a right to an inheritance, the property should be given to Baitul Mal.

This is in accordance with the saying of the Prophet PBUH:

If anyone leaves a debt or a helpless family I shall be responsible but if anyone leaves property, it goes to his heirs. I am the heirs of him who has none, paying blood-wit for him and inheriting from him

In conclusion, if one has family relation or marriage to the deceased, or one is the ex-master of the deceased (the deceased was his slave), then they are eligible and rightful to receive the inheritance of the deceased either by furudh, ta’sib (remainder) and dzawi al-arham as what is stated through al-Quran and al-Sunnah.

While for those with no heir, then his inheritance will be given to the baitulmal to be used upon public welfare (maslahah am).

Lastly, we pray that Allah SWT gives us understanding in His religion. May Allah SWT give us easiness and sincerity within us to worship Him, setting our heart and faith as well as blessing all pf our deeds.

[1] Most probably the wisdom of wala’ be included under the inheritance is because the heir will replace the deceased (the freed salve) as set by syara’. This replacement is considered due to the master’s kindness to free his slave due to love and closeness when he was alive, but then he passes away. Those who give freedom to their slaves seem the same as what an heir would do. [See Ahkam al-Tarikat wa al-Mawarith by Abu Zahrah pg. 103].